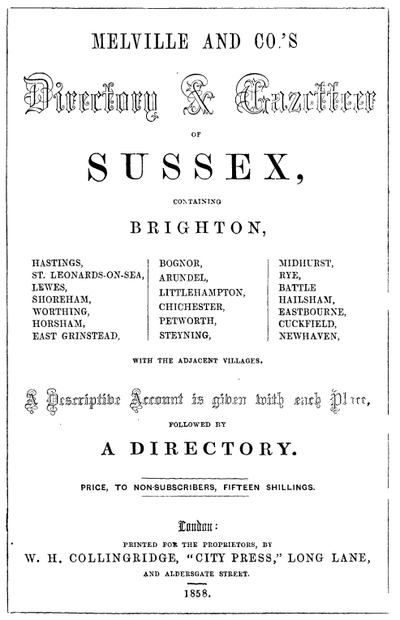 Hastings is a fashionable and favourite marine town, about 63 miles from London by road, and 73 by railway, and 40 from the town of Brighton. Including St. Leonards, it contained in 1851 a population of 17,011. The town is situated in a hollow, surrounded with cliffs and hills. The air is exceedingly pure and salubrious; in one part it is cool and bracing, and another soft and genial, so that a visitor may choose his own climate, at the same time discover rich and diversified prospects over sea and land. It consists of two principal streets, and has of late years undergone considerable improvement. There are beautifully arranged stone buildings on the Crescent, very handsome range of residences under the Cliffs and the Marine Parade, commanding a most extensive sea view, much frequented by the searchers after health and pleasure; other squares and terraces equally picturesque and beautiful, affording altogether one of the most healthy and romantic watering places on the coast. Nor has the commercial interest of the town lost its share in the improvements. Many commodious and beautiful shops have been erected and enlarged, giving the necessary facility to the increasing population. The boat building of Hastings must not be left unnoticed. Pleasure boats in large numbers are built, and larger vessels have not unfrequently been launched here. The trade consists in corn, iron, timber, and coal. The fishery has always been, and still is, a source of profit; an ample supply is obtained for the town, and the superfluity is forwarded to the London markets. The hotels are in general excellent, few places can boast of greater accommodation in this respect. The town affords numerous amusements, which consist of races, regattas, theatre, &c. There are also nursery grounds replete with flowers, shrubs, plants, &c. The town is governed by a mayor, six aldermen, and 18 councillors. Petty and Special Sessions for the borough and Hastings district of the county are held here. It returns two members to parliament. There is a corn market every Saturday, and markets for provisions, &c., open every day in the week; fairs are also held every July and November.

There are three churches — All Saints, St. Clement, and St. Mary in the Castle, and another district church between Hastings and St. Leonards. There are also dissenting chapels connected with almost every denomination.

The castle at Hastings is now in ruins, and covers an area of about an acre and a half. It was built in the reign of William the Conqueror, and probably occupies the site of a more ancient fortress. It is situated upon an eminence commanding a fine view of Hastings and St. Leonards.

ST. LEONARDS-ON-SEA is a town of very recent date, and contains several very handsome terraces and buildings. Previous to 1828 there was scarcely a house of any importance in the parish, but it is now a place noted for baths, libraries, public gardens, assembly rooms, &c., and it has a commodious railway station of the London, Brighton, and South Coast Company. St. Leonards, in 1834, was honoured by the residence of Queen Victoria and the Duchess of Kent, and more recently by the late Queen Dowager.

In the neighbourhood of Hastings and St. Leonards are objects of great interest to the visitor: the old walls—the Castle—the Roman remains on the East hill, and the ancient houses in the town; the Dripping Well - the Lovers’ Seat, on the east side of the town; and on the western side, church, and the delightful scenery of the neighbourhood

Alderton and Shrewsbury, ironmongers and iron founders, 70 and 71 George street, and 1b Robertson street

Bacon, George P. general printer, and proprietor and publisher of the Hastings and St. Leonards Chronicle, 28 Robertson st. and Lewes. Agent to the State Fire Insurance

Bayley, John, registrar of births and deaths for the district of St. Mary in the Castle. Agent to the Phoenix Fire and Pelican Life offices, 25 George street

Foster, John, wholesale fruiterer at the Market and Waterloo place

Inskipp, Frederick Charles, registrar of births and deaths for All Saints’ district, and clerk to the Guardians of Hastings union, East hill

Laing, John, Borough surveyor, and surveyor to the Local Board of Health, 40 High st

Langham, Thomas Parker, solicitor, and commissioner for affidavits in all the courts, 23 Robertson street

May, Reuben, lodging house, and sexton to St. Mary’s in the Castle, 1 Castle place

Mills, Joseph, fruiterer and greengrocer, at the Market and West street

Pearson, Alexander, baker and retailer of beer, 17 and 18 High street

Phillips, William, collector of rates for the Local Board of Health, 6 Croft

Pierce, George, manager to the Water works of the Local Board, 67 High street

Reeves, Thomas, fruiterer and greengrocer, at the Market, and Wellington court

Rock and Son, carriage patentees and manufacturers, 5 and 6 Stratford place

Rogers, William, fruiterer and greengrocer, at the Market, and 71 High street

Simmonds, Mrs. M. A. milliner and dressmaker, 23 All Saints’ street

Sinden, Stephen, fruiferer and greengrocer, at the Market, and 2 Post office passage

Whittington, John, collector of poor rates for the parish of St. Mary in the Castle, 14 St. Andrew’s terrace

Wingfield, Nicholas, sub-agent for Lloyds’, and deputy sergeant for the west division of the Cinque Ports, 3 East parade

Young, William B. solicitor and registrar of the County court, 80 High street

Collector for Local Board. William Phillips.

Carey and Avery, builders and cabinet makers, 8 and 10 Mercatoria

Emary, James, job and posting master and saddle-horse proprietor, and at Hastings

Maggs, S. B. chemist and druggist, 36 Mariva, and 12 Stanhope place