All Saints Church (or All Hallows as it was once called) is commonly referred to as 'The Upper Church' by old families from Hastings. There was a Norman church on this site, referenced to by Cole as having been mentioned in 1291 [1], which probably was partially destroyed in the French Raids of 1377. [2] 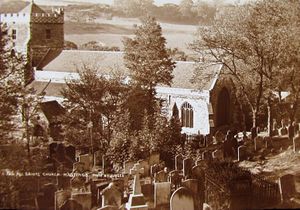 All Saints Church circa 1904

The current church dates from the first half of the 15th century, (although Ross claims the church was partially rebuilt in this period[3]) with a date of rebuilding coming from the will of Richard Mechynge who died in 1436[1] and wished to be buried in the 'new' church of All Saints. A clause in his will left money towards the cost of a new window on the south side.[4]It is highly likely that at one point, the walls were decorated with pictures of the scriptures on the walls for the benefit of parishioners who could not read[4] The only surviving of these is the representation of 'Doom' above the chancel arch.==C17 Recasting of Bells== The bells were recast by Robert Topsell, of Tring, and Thomas Wakeﬁeld, of Chichester in 1615[5]== Original Location == There is some evidence showing that the church has moved up the valley, away from the sea.[6] The church was also, as stated above, rebuilt following the raid in 1377.== Civil War== All Saints and St Clements Church were both occupied by Cromwell’s men during the Civil War. The Royalist rector fled in what was Hastings’ only serious Civil War incident.== 19th Century Restoration == A restoration caried out in 1870 removed many of the artworks on the walls, leaving the 'Doom' representation mentioned above. There is record that one of the scenes showed John the Baptist being beheaded and another on the north wall represented some 16th century ships with a sailor climbing up the shrouds.[4]

The pulpit cloth formed part of the canopy held over Queen Anne at her coronation.[3]

The church has a Henry Willis (Father Willis) organ dating to 1877 which was subsequently rebuilt in 1915 with the three manual console in the north chancel chamber and electrically blown pipes.[7]

Until 1903, the church had a peal of five bells; one bearing a date of 1602 and the name Edmund Giles, Bell Turner. The peal was removed from the church on the 1st of October 1903 for retuning in London and an additional bell to be added by John Warner and Sons Ltd of London[8].

The notorious Titus Oates is recorded as having been a Minister at this church and his father, Samuel as being a Rector.

A brass efﬁgy of a jurat and his wife is in the church, with the following inscription :— “Here under thys ston lyeth the bodys of Thomas Goodenough, sometyme burges of this towne, and Margaret his wyf, for whos soules of your charitie, say a paternoster and an ' ave.” Mr Goodenough was a bailiff of the town in 1515[9]The linked transcriptions are by J. Manwaring Baines
Burials 1813-1828
Burials 1829-1843
Burials 1844-1853