The Swan Hotel was a large inn/hotel situated on the High Street. It had over 300 feet of frontage, extending from Oak Hill, almost up to St Clements Church, occupying the block up to Hill Street and could provide stabling facilities for fifty horses[1] 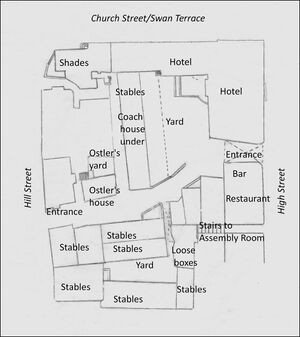 The earliest reference to the Swan is in 1523 when a John Levet of Holyngton occupied a property known as 'Le Swanne', in this portion of the High Street. Cousins mentions a landlord named 'John' - possibly the same person as having died in 1609 and being buried in St Clements Church yard opposite. There was a devastating fire recorded in the High Street during the 16th century, which this building survived.[2]

An early reference to the Swan is by the name of the licensed premises that formed part of the complex, the Swan Shades in 1722, being in the possession of two men, Richardson and Carlton and described as being a brewery, coach house and stable yard.[3] On the 5th of April 1771, the Swan Hotel was taken over by Thomas Hovenden (ex. The George at Rye)[4], who expanded the hotel by the addition of an assembly room on the first floor, overlooking the High Street, and a ballroom[5]. Around this time, the hotel was widely advertised as offering 'Card Assemblies' on a weekly basis with games such as Eucre and Pharaoh being played.

The chronology is nicely taken up at this point by the Hastings & St Leonards Observer in reporting the planned demolition and re-construction of 1889:-[3]:-

...Following this, the property came into the hands of Mercy Grove, a widow who solaced her later years with a second husband, one Richard Halsted, who then became known as the Inn-holder. The first of these events came about in 1727, and the good woman married in 1729, the happy couple apparently thereafter carrying it on together. It is a fair assumption that these people died, leaving the place on the hands of Mercy’s daughter, who certainly sold it to John Collier, the ancestor of the Milwards and Sayers of the present day, and accordingly a man whose name bears considerable historic interest for the inhabitants of Hastings in 1889. The house was in the occupation of Thomas Breeds, probably a forefather of the Breeds family of George-street to-day, in 1769, and, leaving him, it became the property of Wm. Scrivens and James Dodson between ‘69 and "99. Afterwards a firm entitled Humphery and Wickens acquired it, and still later Thomas Stockwell had the business some time between the beginning of the century and 1812. In 1820 Charles Frederick Motts — they were not so high toned as to spell the Frederick without the “k” then — was its lord, and in 1825 Messrs. Wood and Francis Emary, the latter being, we believe, the father of the Mr. Emary who now acts as secretary to the Hastings Annual Regatta,entered into possession of the hotel, which soon became the entire property of Mr. Emary, who bought his partner's share in the concern, and carried it on until May, 1837, when Wm. Eldridge bought it, but was so unfortunate as to be adjudicated bankrupt on November 15th of the same year, when the Swan underwent another change of hands, being sold by auction by Messrs. Southey and Son, at Garraway’s Coffee-house, Change Alley, Cornhill, by order of the assignees of the ill-starred debtor. A copy of the plan made out for that sale we have seen, and from this drawing it would seem that hardly any alterations have been made to the fabric.

The inn now passed into the ownership of a Mr. Wood, a brewer of Lewes, who, we suppose, let it to some local person. Mr. Carswell became the landlord between 50 and ‘60, and his widow held it from 1867 till 1873. There is an interesting story told of Mrs. Carswell. It is to the effect that on her husband’s death he left his affairs heavily involved. Upon this she made a vow never to go outside the house until she had paid his debts. This vow she kept, and not till the last farthing’s liability had been discharged did she breathe the out-door air — a piece of unchronicled heroism which is worthy to take a high place in the annals of the Swan Hotel. We are now well within the memory of many local people, and there are, no doubt, thousands who remember Mr. Collins entering upon a lease of the premises in June, 1874, Mrs. Carswell giving them up before her death. Mr. Collins remained in occupation until October, 1884, when the house was sold to Mr. Plowman, who died suddenly in March, 1886, and his executrix disposed of it to Mr. Bullman, who also died, his decease occurring in 1888, Mrs. Bullman still carried on the business, until recently the London Distillery Company bought it, and again disposed of the entire affair to Messrs. Taylor Brothers, the well-known local builders. The intention now is that the whole of the stock shall be sold by auction, including the horses, conveyances, and all the building material, which will be removed to make room for a public house, which will occupy-the corner, and which the Distillery Company has consented to lease for a certain number of years, and twenty-three other houses, in order as follows :—Seven in Swan-lane, facing St. Clement’s Church, five in High-street, seven on the site of the present stable-yard, and four in Hill-street above.

The second bar, accessed from the corner of Hill Street and Swan Terrace - the Swan Shades - provided a drinking house for the lower-class citizens at this time; the main hotel function rooms being extensively utilised by gentry and many upper-class visitors to the town. The 'shades' survived both the re-modellings of the hotel, both by owners and the devastation caused during WW2 and still exists, albeit as a private house (Silchester House); this change taking place between 1900 and 1923.

As stated above, the original late medieval building was demolished and rebuilt in 1889. The rebuild involved moving the Swan Inn to a much smaller plot on the corner and building housing (including Swan Avenue) on part of the site.

By the time of the 1911 Census, George Vening is listed as the proprietor[6]

The pub was destroyed by enemy action on May 23rd 1943, with the following being recorded as losing their lives;

A memorial service was held at St Clements Church on the 26th of May 1946 for those that lost their lives in the raid. Later, to commemorate the large loss of life on this site during WW2, the bombed site was cleared in late 1952 and converted into a memorial garden featuring a sundial with the names of those who had lost their lives on the pedestal[7].

Decorating work on one of the properties making up Swan Terrace in October of 2020 that used to be the Swan Shades uncovered a ghost sign for the tavern[8].

On the south-east coast, the name ‘shades’ was commonly used for taprooms located behind major inns and hotels. Shades bars came into existence because of the demands of the military personnel billeted along the south-east coast during the Napoleonic Wars.