Hastings suffered its first air attack at 7:15am on the 26 July 1940, when a single aircraft dropped 11 explosive bombs, several of which fell on the Central Cricket Ground. Perhaps out of all the raids, the most severe was the 11th March 1943 tip and run raid[1], although for sheer destruction and loss of lives, the 23rd May 1943 raid which resulted in the loss of the Swan Hotel and Albany Hotel holds that grim record.

A number of Air Raid Shelters and sirens were constructed in various areas of the town and various designs for do-it-yourself shelters were published as early as the mid 1930s with tests being made of those sirens and the varying degrees of success reported in the local press. In addition, mindful of the usage of poison gas in WW1, serious discussion about whether the civilian population would require some form of protection against gas attacks commenced locally around 1935/6. By the middle of 1937 the Government had started to produce and issue Gas Masks to all citizens, carrying of which became compulsory as the war developed.By 1940, it became known that the issued gas masks were prone to deterioration, so testing stations were set up at the following locations in the town: Rear of Castle Hotel; Cave at the rear of 8 Claremont; 79 High Street; London Road Congregational Church hall; St Mary Magdalen Church rectory; St Peters Church Hall; the Sun Lounge; rear of Judges premises, Bexhill Road; St Dominics School, Filsham Road; St James Mission Hall, Battle Road; 88 Stonefield Road; 114 Mount Pleasant Road; 19 The Ridge; rear of 87 Mount Road. Members of public were urged by the Chief Constable to have the masks tested from the 26th of March 1940[2]. In the final tally, however, there is no evidence that poison gas was ever used against the general population of the UK.

A number of civilians volunteered to act as Air Raid Wardens and had dedicated posts set up around key parts of the town to spot for fires and damage caused by bombing, together with assisting with ensuring blackout legislation was being complied with and rescue of victims, together with carrying out emergency repairs. A known post was at 2 Frederick Road[3]

In 1940, the Women's Voluntary Service (WVS) set up an emergency hostel in Norbourne, Filsham Road. The house had been donated by the owners, Mr. & Mrs. Crafter[4] and was equipped with bedding and furniture donated by Mr. & Mrs. Southwood of the Cromwell Hotel in order that up to fifteen persons could be accommodated[5] 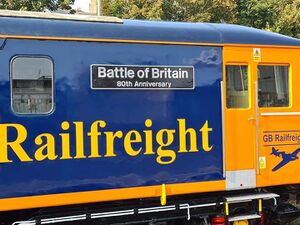 80th Anniversary of Battle of Britain[edit]

To commemorate the 80th Anniversary of the Battle of Britain, a Railfreight locomotive was renamed to the 'Battle of Britain' at the St Leonards Railway Depot on the 11th of September 2020. The ceremony was accompanied by a flypast of Spitfires and four F35 jet aircraft.