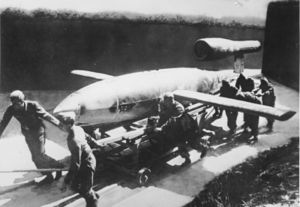 Flying bomb being prepared for launch

In June 1944, the Germans started sending V1 Flying bombs (or 'Doodlebugs') to target London. A doodlebug was essentialy a bomb with wings, appearing very similar to a small aeroplane albeit with no pilot. In a sense, they could have been called the pre-decessor of the cruise missile. Thousands of these doodlebugs were launched against London.[1]. The missiles were powered by fairly simple pulse-jet engines with a small propellor on the front being used to calculate distance flown by rotating a shaft a set number of turns. When the pre-set number was reached, a mechanism deflected the control surfaces on the bombs causing them to dive onto their targets.

Navigation of the missiles relied largely on the launch-ramps being directly oriented to point at the target, London with a compass being used to 'fine-tune' the direction in which the missile flew - hence the non-magnetic building in the launch site strutures described below.

These early guided missiles were launched from fixed ramps situated in France. The launch sites had a number of unique buildings associated with each site in addition to the launch ramp; These were the 'ski' shaped buildings utilised for storage, a non-magnetic building used to set the compasses in the missile and a number of associated buildings for filling of propellant etc.[2] These ultimately made detection of the sites by the Allied reconnaissance experts easier, by the similarity of one site to another, although later in the war, minimalist sites consisting of very little else but the launch ramp and non-magnetic building were constructed in woodland.

Although the target was London, many of these fell short of the target, whether due to impact with coastal cliffs, being 'tipped' over by pilots or simple errors in the settings/manufacture. This was compounded by reports sent back to Germany by double agents (spies that had been 'turned' to work for the Allies) that missiles were over-shooting, causing them to fall still further short of target.

It was commonly said that as long as you could hear the engine, you were safe. The moment the engine cut-out due to the guidance system suddenly tipping the elevators causing the bomb to dive, you would run for cover. This defect was rectified soon after the Germans became aware of it.

East Sussex had perhaps more of a share in the explosions and devastation caused by the V1s than any other counties on the south coast, the track of most missiles from the launch sites being directly over the county[3], leading the area to be nicknamed 'Doodlebug Alley'[4]. In terms of Hastings, there were six 'lanes' in which the robotic aircraft flew over the town[5].

There were 16 known impacts within the Borough with 15 damaging property or life[5];
Bexhill Road (near The Bull public house) - 15th of June 1944. This was the first to come down on/near Hastings and was shot-down by Ack-Ack guns on the seafront[6].
Mayfield Farm
Bexleigh Avenue
89/91 Pevensey Road West[7]
Fairlight Cliffs
High Beech Farm
In the sea off of Carlisle Parade
Amherst Road
Conqueror Road
Ledsham Court
Old Church Rd 3 fatalities, 47 injured and two houses destroyed 16 July 1944[4]. The 'tipping' and subsequent crash of this was filmed and uploaded to YouTube V1 Shootdown over Hastings
Pine Avenue near to The Ridge
Shear Barn Farm, destroying the farmhouse on the 20th July 1944 with one fatality, Ethel Barnes[8]. This was the last fatality as a result of the doodlebugs
St Leonards Parish Church destroyed when a V1 exploded on its steps 29th July 1944
Old Harrow Road
Wellington Mews

The final bomb to land on the town was that of the 2nd August 1944[footnotes 1] and the threat receded as Allied advances in France pushed the launch sites out of range. In total, the flying bombs claimed only four people, with a further 29 seriously injured and 37 slightly injured[5]