The first St Clements Church was under the cliff towards the Harbour, possibly near the Light Steps[1]. Owing to encroachment of the sea (although Cole claims it was destroyed in 1236[1]), it moved to its present location in 1286. This site was in turn destroyed in 1377 when the French raided the town and the present church erected on the same site in 1380.[2][3][1] The church was built by Abbot of Fecamp, on land provided by Alan De Ches-mongre[1].

The Altar piece is painted by Roger Mortimer; in the centre is the decalogue, with painting of Moses and Aaron to the left and right respectively.[3] The ceiling represents the heavenly regions and has figures of Faith, Hope, Charity and Fortitude in the corners.[3] There is an octagonal font at the west end of the church, decorated by the instruments of our Saviour's passion on the sides.[3]

Originally, there was an pulpit cover made from part of the canopy used at King George I's coronation, but this was removed due to it appearing 'too showy'[3]

Two chandeliers, removed and sold for brass value in 1838, used to hang from the ceiling.[3]

Access to the belfry is via 52 serpentine stone steps[4]. The original peal of five bells were replaced by eight steel bells in 1860[5]. There was a rumour[4] during the 1930s that the bells of St. Clement's were transferred to the higher church, All Saints, but this is unsubstantiated. The steel bells were subsequently replaced in 1966.


In 1882, when the assistant minister, the Rev. W. B. Bennett, was about to resign, the parishioners organised a committee to present him with a leaving testimonial. In total the sum of 100 sovereigns was raised and presented to the minister during the Christmas period[8].

Both All Saints Church and St Clements Church were both occupied by Cromwell’s men during the Civil War. The Royalist rector fled in what was Hastings’ only serious Civil War incident.

In 1720, a combined French and Dutch fleet bombarded the town. This event is memorialised in the form of the two cannonballs embedded in the tower of the church on the site facing Hill Street.[9] 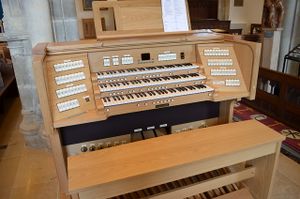 On the ﬂoor are two brasses, with the following inscriptions :- “Here lyeth the body of Thomas “'ekes, late Jurat of Heating, and Margery his Wyf, which Thomas dyed the Xth day of November, in the year of our Lord and God 1563. they had issue of hyr body on Daughter named Elizabeth.” The brass of the female ﬁgure is gone. The other brass carries the following inscription in Roman capitals: “ Here under lyeth buried the bones of John Barley, late of this town and port of Hasting mercer; and of Thomas Barley, his sonne, and Alyce his daughter. by Mary his wife, daughter of Robert Harley, which John died the last day of March, 1601, being of age the 41 years, and the said Thomas died the ﬁrst of April, 1600, being 19 years of age, and the said Alice died the 15th day of June, 1592, being of the age of 7 years, to whom God grant a joyful resurrection.”[10]

In 1854, where various parts of the flint facing had been replaced by brick due to vandalism, the church was restored to its former appearance during February of that year. Just prior to this, there had been a number of additions to the church; - funded by a bequest from the late Rev. J. G. Foyster - a new doorway and window in the west face of the tower; and a reredos and memorial window at the west end of the chancel[11].

The bomb that destroyed the nearby Swan Hotel, together with others nearby caused damage to the fabric of the church, particularly the Lady Chapel window and the east window. These were replaced by windows designed by Philip Cole

In 2012 a major restoration project commenced on the church, necessitating its closure for several months. The Philip Cole stained-glass windows were restored, a new marble floor was fitted, and a large glass-walled multifunction room was installed in the rear portion of the nave. Steps up to a Gallery with seating above were also installed. This provided flexible spaces for meetings, kitchen, toilets and new vestry. A new bellringers platform was also installed with access via a spiral staircase. Finally, the original Brown organ was replaced with a digital Viscount Regent 356 3 manual and pedalboard organ with 56 stops voices (rocker tabs). This organ could play back pre-recorded midi files from a usb pen-drive, through an audio system largely based in the eastern end of the north aisle, the church re-opening at Easter 2013.