A now re-opened pub on East Beach Street, opening again in 2016[1]. The pub was popular with fishermen, situated as it was adjacent to the Fishmarket. 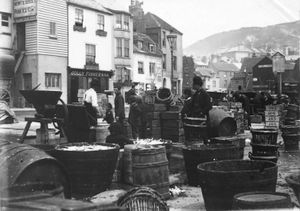 The premises originally opened their doors as a pub in 1769[2].

In 1867, the landlord, Mr. Swaine (who also traded in fish at the adjacent fishmarket) was fined 5s. with 12s. costs for selling beer after a constable had seen four men enter the premises on a Sunday morning. Upon entering the pub with some colleagues, the constable saw the landlord's daughter pulling a drink from the beer taps. A further man was seen attempting to conceal a drink in the back-room, this then being seized by another constable. Mr. Swaine claimed that he would never serve beer on a Sunday morning, and that the man who had been seen drinking was one of his servants. The magistrates failed to believe his story, preferring that of the police men[3]. A similar offence occurred in 1874. Two policement entered the premises, one via the front door and another via the rear. Upon going upstairs, they found two men (one of whom was the landlord's brother, Mark), smoking with measures of beer and whisky. The landlord claimed that due to the heavy rain that Sunday morning, he had invited both men inside for shelter and dinner. The magistrates again preferred the evidence of the police and fined the landlord £1 with a default sentence of 14 days for non-payment, with the two men being fined 5s. each[4]

During 1875, Mr. Swaine almost fell foul of the law again; this time being charged with failing to open the door to a policeman, when, after a policeman had seen Mark Swaine enter the back door of the premises at 10:10, followed by another man named 'Martin' exiting the same door, after knocking on the door and seeing someone approach the door then recede back into the premises. The constable then went around to the front of the premises, and after seeing Mark Swaine exit that door, knocked again. The licensee's wife opened the door and when asked why she did not open the back door, answered she had just gone to the front door to do something. Hearing a knock at the back door, she returned to find no-one there. She then let Mark Swaine out of the front door and saw the constable waiting there. The case was dismissed[5].

Under the next landlord, Thomas Adams, it would appear that the premises continued to be caught for license breaches; for in 1876 at 5:10 am a policeman entered the bar and saw two men with partially filled beer pots in front of them. Although a number of nearby premises were permitted to open at such a time, the Jolly Fisherman was not and as a result, the landlord was fined 20s. - this being the minimum permitted penalty by law, the magistrate choosing to show leniency in this case[6]. The pub was finally permitted to open at 5:00am in 1886[7], this permission being renewed in 1900[8], although it is claimed that the pub did briefly have an early opening license in 1875 also[2].

The premises were flooded out in 1883, when following a gale-force storm overnight on the 1st of September 1883 the pub's doors were forced open by the winds and seas and the bar and cellars flooded[9].

Upon the outbreak of WW1, this pub in common with many other old town pubs applied for permission to be open at 5:00am to serve the fishermen and gave undertakings not to serve any servicemen. Unfortunately, this with most of the other applicants had their permission denied - the hands of the magistrates being tied by the emergency powers given to government[10].

In 1925, there was an application to extend the license to permit early morning openings between 6:30am to 8:30am to better serve the fishing trade; the premises having previously enjoyed early opening between 1908 and 1921 when the 1921 Licensing Act was passed. This was refused, mainly at the behest of the Chief Constable[11].

The building was nearly swept away by the 1930 Slum Clearances, but survived. The other two premises that could have been lost in this programme were the Royal Standard and the London Trader (an unlicensed beer-house at the time)[12]

A games club was set up by the pub in 1936, with annual prize-giving ceremonies for the winners at the various pub games played on the premises - darts and shove-penny being explicitly reported, although it is probable other games such as dominoes etc were also played. The prizes were presented through to 1939 by Mr. & Mrs. Charles Winter. Charles reportedly also provided musical entertainment through the evening on piano and accordion[13].

Partly as a result of wartime restrictions, the pub closed briefly mid-WW2 in 1942 - it is also reported that the premises suffered some minor damage due to enemy action[2].

By the 1950s, the premises were tied to the Fremlins brewery as evidenced by press reports showing the pub's darts and shove-penny teams playing in the Fremlins league[14]. The premises became the headquarters of the Winkle Club in 1954 following the closure of the Prince Albert Inn[15]

On the 28th of August, 1954, Raymond Baxter presented part of a live outside broadcast for the BBC's radio programme "Out of Town Tonight" from the pub[16], the other local venues featured were the White Rock Pavilion and St Clements Caves.

In 1954, the adjacent London Trader, up until then a beer-house, successfully transferred the license from the Jolly Fisherman to itself[2].

after being used as a secondhand furniture/antique shop in the 1980s.

Since 2016 the building returned to the name The Jolly Fisherman and is a pub once more, serving real ales and craft beers to the local community.

Unique Property Reference Number. Each building or individual sub-unit of a building has been assigned a UPRN to facilitate searching for planning applications among other functions.