St Clements Caves are the best known underground feature of Hastings, with an early plan of the layout being retrieved by means of a FOI application to the Council during 2018[1]. 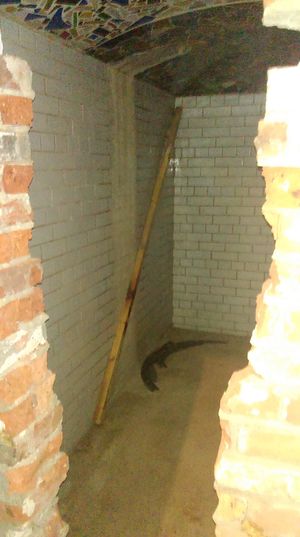 Also in the same area is the tunnel that connected the Royal Victoria Hotel to the Masonic Lodge behind. Incidentally in 1965, there was a planning permission approved to demolish the hotel and replace with flats.

A bit further West towards Bexhill is a cave described as a 'long straight tunnel-like main gallery with side galleries' in Ross's 1835 guide to the town[2]. This cave was occupied by a family at one point and is believed to have a reservoir or subterranean water source at the end. The consensus generally is that this cave is now an electricity substation with no access.

Still in the West St Leonards/Marina area, we have reports of pavement work exposing arches of small underground extensions to the shops and houses above extending to the full width of the pavement. To the East, underneath Warrior Square a tunnel was discovered by a council workman, this possibly being the culverted stream that used to run down into this valley from Bohemia.

Moving East now, we have caves behind the properties at White Rock, one of them having been utilised for drug production during the 1990s, and another is utilised for the Real Crime Museum. Perhaps the largest of the caves was used as an air raid shelter during WW2 and There are a series of tunnels associated with the White Rock Baths, now 'Source'. These tunnels extend as far as the underground car-park to the east of the site and also cross under the road to what used to be the exhaust chimney of the boilers. One of the more imposing properties here, the Palace Hotel had at one time an underground shooting alley, again used as Air Raid shelters.

Up into Claremont/Trinity Triangle and we have a profusion of caves in the back alley known colloquially as Gotham Alley. Many of the caves and caverns here were utilised for storage by the businesses backing on to them and additionally as air-raid shelters during WW2. Under the Observer building is the largest of these, the extent of which can be seen in the plans of the building[3].

Back to the seafront and past the underground car-park built by Sidney Little and opening late in 1931, walking through part of what used to be the car-park but is now partitioned off for pedestrians. This too was used during WW2 as a shelter. The exit ramp leading to Harold Place used to be one of the entrances for vehicles to access the car park.

Moving further East towards Castle Hill Road, the cliffs beneath the Castle have large areas of brickwork facing onto the car park. One of these was used prior to the clearance of this area in the 1970s as a store for a builders merchant that once occupied one of the properties and was said to be large enough to fit a double decker bus! Dotted around this outcrop of sandstone are many smaller caverns underneath the Castle, one of which was the basement of what used to be Mastins Department Store. 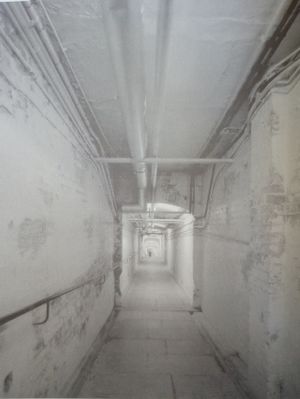 Around the headland that is topped by the castle we now see Pelham Crescent. There was originally a glass roofed arcade of shops beneath the crescent which was accessed via one of the now bricked up archways. St Mary in the Castle Church too has some hidden caves other than the obvious catacombs beneath. A tunnel was discovered behind a door by a priest which led to a water source believed to be the original castle's Well. Move into the Old Town itself, and there are a number of tales of smugglers caves/tunnels beneath houses, the best known of which is perhaps the one from the Stag Public House with other tunnels being described as bolt holes and places where smugglers could hide their contraband. One of the houses built on the Eastern side of the West Hill, known as West Hill Villa which was once used as a pottery features the caves as inhabitable space even today!

Back down and along to Rock a Nore and again we see a plethora of caves/tunnels. The blue house has a cave behind it and there are a number of caverns higher on the cliff, some being inhabited for example Crusoe's Cave and Butler's Cave. Turning back and moving up the path taken by the Bourne stream we pass by some woodland and allotments. Buried in the undergrowth is one of the largest air raid shelters purposely built in the borough.

At the head of the valley, we come to the junction of Old London Road and Priory Road. Crossing into Frederick Road, we descend into yet another valley. On the opposite slope is the site of what used to be the Workhouse, now converted into housing but prior to this became an extension to St Helens Hospital. There is an underground tunnel connecting the two halves of St Helens Hospital under Frederick Road, an additional feature to look out for here is one of the original gate-posts to the hospital which still bears bullet holes from when the area was strafed by an enemy fighter plane during WW2.

The following 5 pages are in this category, out of 5 total.