Queens Road most likely originated as a muddy, often flooded dirt track running along the eastern margin of the Priory Meadow, any development being on the hill-slopes, where the ground was relatively stable. The meadow, together with the flood plain bordering the Priory Stream was marshy ground, with many difficulties reported when the 'Ashford railway arm' extension (opened c.1850) was constructed which required a large embankment to be built across the Priory Meadows; the scale of the embankment may be judged by the height of St Andrew's Bridge, effectively forming a dam across the Priory Valley and altering the appearance of the whole area more than anything else in recent history. 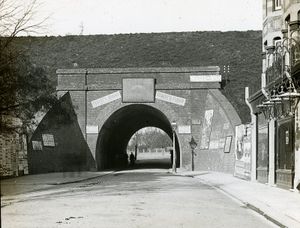 During construction of some of the buildings, dinosaur bones have been found, together with pebbles from the beach in the bores for piling which reached a depth of in excess of 40 feet in places

Queens Road first came into being when the council merged and renamed the roads called Queens Buildings, Meadow Road and Bedford Place, during 1876. Above Russell Street and Portland Place, the road was known as St Andrew's Terrace, and later as St Andrew's Road, with Spring Terrace forming the terrace of shops immediately north of Portland Place. The roads, including Spring Gardens were dedicated in 1849[1] The Bedford Public House stood on the corner of Portland Place and was at number 1 St Andrew's Road. Originally, the road did not extend very far up beyond this point, but following a gift of land from Sarah Waldegrave, it was possible to widen and extend the road leading to St Andrews Archway, the route prior to this being via Stonefield Road. In June 1882 the Prince and Princess of Wales dedicated (and renamed) St Andrew's Gardens (that had opened in 1864) as Alexandra Park and the road leading to it was renamed too, as Queens Road; the pub would then become No 37 with the numbering running up the east side of the road to the railway bridge and back down the western side.

As a result of the opening of St Andrew's Gardens and development occurring further up the Priory Valley, the archway carrying the railway which had been constructed around 1849-1850 over the road that provided access to these areas rapidly became a dangerous bottleneck. This was replaced by an iron girder bridge with fluted columns in November 1898, the demolition taking three days to complete. The bridge received a makeover on its centenary in 1998 and on the southern footpath there is a brick bearing the original 1898 date stamp.

During the late 1950s, the wall between the Central Cricket Ground and Queens Road was demolished in favour of an avenue of shops extending round the corner into South Terrace (Queens Parade). A Coach Ticket Office and small car-park was placed in the area immediately adjacent to the Town Hall, with one of the turrets serving as a public convenience (later a bookmakers office). This avenue of shops was demolished during the 1980s, together with the Cricket Ground as part of the development of Priory Meadow (Shopping Centre).

The terrace of shops with the set-back first floors opposite Priory Meadow (Shopping Centre) are mostly original - the shop fronts were originally gardens, although the large building and the adjacent property (nos 10 & 11) on the corner of Albert Road was lost when the road was widened in the early 1990s.