Constructed in 1864[1], after a competition for designs which attracted some thirty seven entries[2], the winning design being that of Mr E. A. Heffer[2] The site chosen was that of the old bridge across the Priory Stream[3] Baines reports that a complaint emanated from a Mr. Henry Winter, who suggested that it should replace an "unsightly obelisk" in the centre of the borough. The obelisk was reportedly a temporary affair, being suggested as having been erected circa 1839 when the Priory Marshes were drained.[4] 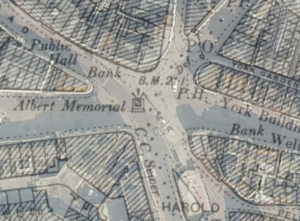 The memorial stood in the road that now leads from Harold Place to Havelock Road as shown in the map overlay to the left. A common misconception is that one of the circular features in the paving of the area was the location - this actually relates to the Southern Water Storm Drain.

Fittingly, the foundation stone was placed on the 10th of November 1862, the 21st birthday of the Prince of Wales, Prince Albert's son. Mayor Thomas Ross (1810-1881) carried this out using a silver trowel whilst a 21 gun salute was given at the nearby beach by the 4th Cinque Ports Volunteer Artillery. Concealed in a cavity within the foundation stone, a bottle was placed containing parchment which read:[3] 'Prince Consort Memorial. The foundation stone of this clock tower, erected in commemoration of the esteem and regard entertained by the inhabitants of this Borough towards his late Royal Highness, the Prince Consort, was laid by Thomas Ross (1810-1881) esquire, Mayor of Hastings, on Monday the tenth day of November 1862'. There then followed the names of members of the fundraising committee, the contractors, architect, treasurer and secretary'. There were a few difficulties in construction, but the building was completed in December 1863. The clock was installed at a later date.

It was found difficult to place the foundations for the memorial, the ground being a large layer of pebbles dating back to the times when the area was the estuary of the Priory Stream. In the end, the foundations were placed some fourteen feet below the surface level.[2]

'The tower is of the Perpendicular Gothic style of architecture, sixty-five feet in height. The entrance to the interior is on the west side, by means of an oak door. Immediately above the door, is a ribbon with the following inscription : "Erected to Albert the Good, in the Year of our Lord 1862."' [2]'On the east side a massive polished red granite drinking-fountain is fixed. On the north and south sides panels are left plain for future inscriptions, if necessary. In a niche, above the gables, on the south side, is the statue of his Royal Highness, executed in Portland stone. His Royal Highness is represented wearing his robes as K.G. Below the dials, on the north, east, and west sides, are tracerated panels with plain shields. The panel on the south bears the arms of His Royal Highness. An octagonal turret, above the clock chamber, is of pierced quatrefoils, of alternate design, for the chimes. The spire has ornamental terminations and a gilded vane, with the letter "A" inscribed thereon.' [2]'At each corner of the- tower, at the base, is placed an ornamental lamp, upon large blocks of York stone. The four steps between the lamps are also of York stone. The carving represents the- rose, shamrock, thistle, dragon, oak, vine, &c. The Borough arms are cut above the doorway, and are well executed. The clock was supplied by Mr. John Murray, jun., of St. Leonards. The dials are four feet six inches in diameter, and are illuminated at night.'[2]

The memorial was slightly damaged after an arson attack on the 28th of April 1973 when the clock sustained damage and the surrounding stone cracked. Then, on Monday June 18 1973 a further smaller fire broke out[3]. Subsequently, serious faults were found in the structure making it dangerous and needing demolition. The only parts that survived are the statue of Prince Albert (now erected outside the Town Hall after languishing in a greenhouse in Alexandra Park for decades) and two of the lamps at its base (now outside the Hastings Museum in John's Place) the clock faces, bells and mechanism went into storage but were stolen. The drinking fountain, door and weather vane also went into storage but their current whereabouts are unknown.[5]Removal had been contemplated as early as 1952[6]

There were plans in 1991 to rebuild a clock tower described as being up to 18 metres tall on the site of the memorial, but this was withdrawn[7]