Power generation in Hastings started during the late 1800s, with Hastings being one of the earliest adopters of electric lighting. An application was made to the Hastings Urban Sanitary Authority for permission to build the Earl Street Power Station on the 27th May 1882. This was to provide light for the rapidly growing town.

The original plant generated a potentially lethal 2,000V supply from Brush dynamos shaft driven by underfired locomotive type boilers. The supply to customers' premises was also 2,000V so lighting was by incandescent lamps connected in series. In August 1882 the town council agreed to a 12 month experiment for lighting several local streets including the sea front. By 5 October 1882 The Hastings and St Leonards Advertiser reported that "The electric light works is in active operation and within the next few weeks it is probable that churches and private establishments will be lit.”

Demand grew rapidly and as a result, expansion of the power generating capacity of the Earl Street site took place over the next two decades. From the Electrical Times; “... the space is so cramped that Mr . Ferguson must have had need of all his ingenuity to accommodate cooling towers, coal store, and pumps for the present capacity . The coal stores and the cooling ponds and pumps are on the roof and the steel columns carrying them had to have very special footings quite independent of the walls, which are a mere filling-in and do not take the weight. 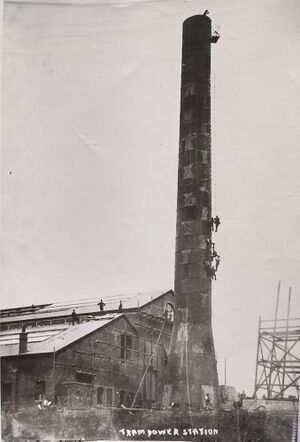 Built in 1905 to generate electricity specifically for the Hastings trams, the first power station in Ore Valley was situated at the bottom of a dirt track which was later built-up and named as Parker Road.

At this time electricity was generated by the tram companies' own plant and not taken from the county borough's power network. Electricity for all the borough’s trams was supplied from here, with substations situated at both Bulverhythe and Silverhill. Power was generated by six coal fuelled engines housed in the main power station building which had a distinctive 175ft high steel plate chimney and was serviced by a railway siding from SECR behind Ore Railway Station. The old Tram Power Station's life came to an end during 1925 when electricity supplies were transferred to what was the newly built coal plant next door. The old station was slowly demolished over a two year period following its closure.

The South Eastern Electricity Board (Seeboard) had a showroom at York Buildings where appliances could be bought and bills paid during the 1960s-1980s.