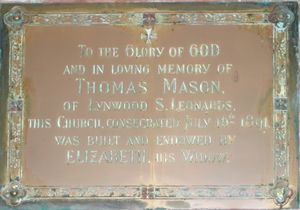 All Souls Church, was an Anglican church that was consecrated on the 16th July 1891 by the Right Reverand Richard Durnford, D.D, Lord Bishop of Chichester. It has been described as one of the best works by the ecclesiastical architect Arthur Blomfield who also built Christ Church St Leonards. It features Heaton, Butler and Bayne stained glass, an unusual, possibly unique Norman and Beard (Norwich) organ and an elaborate mosaic reredos. The church is Grade II* Listed[1]. The building itself is an imposing brick edifice on the corner of Athelstan Road and Berlin Road.This was the last of the major parish churches to have been constructed in the town.[2] 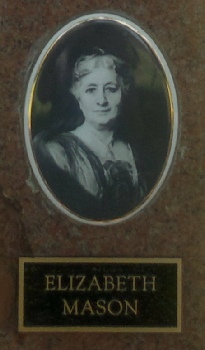 Image of Mrs Mason from her restored gravemarker[3]

A resident of Lynwood, Old Roar Road, St Leonards-on-Sea, Elizabeth Mason, provided £15,000 for a church to be built in memory of her late husband, Thomas Mason[3]. The particular location was chosen at the suggestion of the Rev. Canon H. D. Jones, in part due to the location of the Parish Rooms in Athelstan Road, which for a time was a mission hall. The neighbourhood of Clive Vale was being developed rapidly at this time on land that was part of the Rev. Milward-Sayer's estate.[4][5]The foundation stone was placed on All Souls' Day (2 November) 1889 with a brief service attended by several hundred people and a number of clergymen including; the Revs. Canon Whelpton (Eastbourne), G. A. Foyster, H. B. Foyster, Archdeacon Noyes, C. L. Vaughan, Rev. H. U. Whelpton (vicar designate), C. W. J. Wilson, A. Macdona, H. L. Beardmore, E. Clowes, A. Hodges & J. Orlebar accompanied by a Mr H. W. Eaton who also was the organist for the consecration. Mrs Mason was intended to attend the service but was indisposed.[5]

Construction work began in 1890, the firm of Messrs. Goddard of Dorking being selected as the main contractor at a cost of approximately £11,000. The site itself was donated by the Rev. Milward-Sayer, occupying a site sloped diagonally across the plot, and the designed capacity was for up between 800 and 900 parishioners.[5] 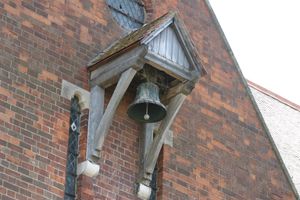 The church is a tall structure, there being a minor difference in height between the nave and the chancel, and the chancel arch is modest in form. It is constructed almost entirely of red brick, with an estimated 40 different moulds being used in total with responds on the walls[6]. It is believed that some of the bricks originated in Tunbridge Wells due to a makers mark being found on two bricks within the structure.[6] 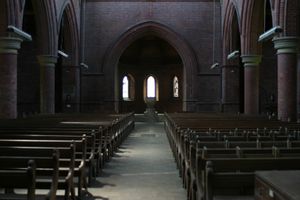 View looking down the aisle

The aisles have five bays, each with paired lancet windows, projecting below the clerestory with paired lancets and an oculus to the first and fifth bays and three stepped lancet windows in the remaining bays. The east window has five lights in a distinctive layout, all set in an arched recess: the middle window is a tall lancet, and the flanking pairs have y-tracery.[7][8] Similar tracery also appears in windows in the Lady chapel and the west wall. Some of the clerestory windows have plate tracery.[7] The north side has an organ chamber in the form of a transept, lit by narrow windows and an oculus. One bell is held in a gabled wooden chamber. At the west end is a baptistery in a canted apse, a typical feature of Blomfield Churches.[8] 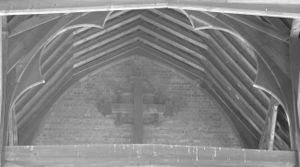 There were plans to construct a tower on the south east corner, however this did not come to fruition due to insufficient funds being available.[6][8]The spacious interior has a high-quality roof of open timberwork with pronounced cusping, this being one of the main characteristics of Blomfield's work. Virtually all of the interior is in brick except the abaci of the piers.[8] One local historian described the interior as "the finest red-brick interior" in the county.[9]

Screen: Open ironwork and incorporating the pulpit and lectern, of a type favoured by Blomfield.The seating in the body of the church has ends with an inverted Y-profile.[6][7]At the west end the font has a marble circular bowl on a quatrefoil base with green marble shafts.[6][7]Post-closure, many of the fittings have been removed by the Diocese – the High Altar has gone to Worthing, the large crucifix, the stations of the cross and other statues to other churches[6]

This is listed with the CWGC, however is not currently recorded by them as being potentially at risk[15]

Construction of what has been described as a unique and essentially unaltered Norman and Beard (Norwich) organ[16] started during 1893 under the direction of the then organist, Edward Kennard and featured a moveable console, operating on the Hope-Jones system attached to the main instrument by over 100 feet of cabling and powered by batteries[6], with the air being pumped in the traditional manner via bellows. This is one of the earliest examples of an electro-pneumatic organ.[2] The initial costs of funding this were partly met by the sale of a series of photographs taken by the local photographer G W Bradshaw.[10] 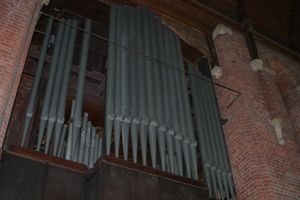 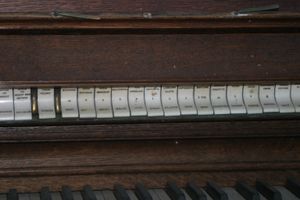 The first public hearing of the organ occurred on the 6th of April 1893 with a recital given by the organist after a short benediction service.[17]. The lower manual (of three) of the organ was never completed. Had this occurred, it would have been the largest in the area.[18]. As it was, the full construction and installation of the instrument took almost as long as the church to be completed with fund-raising efforts continuing through to 1895. There was a complete breakdown of the blowing apparatus for the organ in October 1930, preventing use for a period, with repairs estimated to cost £1,000.00.[19]

By the late 20th century, population shifts and declining church attendance meant the provision of Anglican churches in Hastings was excessive. Four were demolished between 1964 and 1986, and others were closed. The first indication that All Souls Church may close came in August 2002, when structural problems were discovered, forcing the entrance on Berlin Road to be shut. Repairs were estimated at £200,000—too much for the now only 25-strong congregation to raise[20]. Furthermore, the church was already supported by large grants to keep it going. It remained open for a few more years, but the final service was held on 4 November 2007 and a temporary closure notice was served.[21] It was formally declared redundant by the Diocese of Chichester on 1 March 2008. The parish was joined to that of Christ Church Ore after closure.[8]Secretary of All Souls parochial church council, John Barker, lives opposite and has been a member of the congregation for over 60 years[6], and his parents before that. "It's almost an extension of my home,". Mr Barker is currently the caretaker for the building.[21] 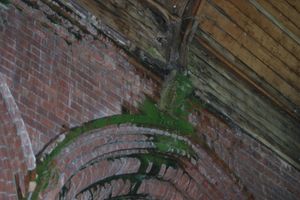 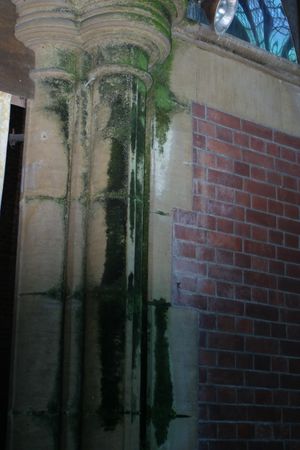 The roof has lost a number of ridge tiles, with water and pigeons gaining access causing damage to both the flooring and the reredos. In the Lady Chapel, there is clear indications of water seepage, with vegetation growing down one of the pillars. There have also been unsuccessful attempts of lead theft with one of the lower roofs being badly affected. The building was listed in the Victorian Society's top ten list of endangered buildings in 2014 with repairs then estimated to exceed £1.2 million.[22]== Future == There has been interest expressed in the building by a sculptor who wishes to set up an exhibition space for his work, although at the time of writing, this is in the early stages.[23]

Led by the Vicar (the Rev. E. P. F. Durnford), carrying a small pistol fully loaded, a search party ransacked All Souls Church in the early hours of Sunday morning on the 18th of July 1909 following an alarm that a burglar was within. Residents in the neighbourhood were disturbed by hearing police whistles violently blown and crowd in varying stages of undress collected outside the church. A plain clothes detective had given the alarm and a number of police constables came and helped in the search. Nothing was found missing from the church and there were no signs of forcible entry, and the searchers concluded it was a false alarm.[24]