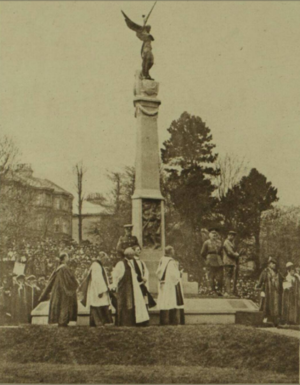 Unveiling of the war memorial 1922

Although Hastings already had a memorial to those who gave their lives in the Boer War on White Rock, following the far greater loss of life in World War One, a new memorial was required.

Initially this was provided by repurposing the White Rock Bandstand adjacent to Hastings Pier and opposite the General Infirmary by means of enclosing it with panels bearing the names of those who had paid the ultimate price, being replaced by the one in Alexandra Park. This was unveiled by the Earl of Cavan, Chief of the Imperial Staff and dedicated by the Bishop of Chichester in March 1922[1] A list of the names of servicemen recorded on this memorial may be found at WW1 Roll Of Honour website.