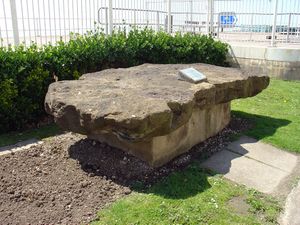 This stone slab was known as or near a pool called ‘Old Woman’s Tap’ or ‘Tapshaw / Tapshore’. It was believed to have originally stood roughly at the bottom of Maze Hill and a spring / stream flowed over it (hence the name)[1]. There is some evidence that it was in the way of James Burton’s development, possibly near the site of the Royal Victoria Hotel on the seafront in Brett's Histories[2].

A Hastings Guide of 1794, cited by J. Manwaring Baines, states that the rock known as William the Conqueror's Table, overhung a pool known as 'Old Woman's Tap' - this pool being drained to construct the Royal Victoria Hotel. During construction work, it was moved by means of oxen to St Leonards Gardens[2][3]. It was moved to near the entrance to the Pier around the 1960s, perhaps in 1965/6, when the Triodome was erected on the Pier to house the newly-made Hastings Embroidery. In 1987[4] it was moved back to St. Leonards seafront.[1]