On the 25th Mar 1891, the West Hill Lift was officially opened by Mr. Wilson Noble, M. P.[1] Construction commenced in January 1889, with the keystone placed in the first arch of the tunnel at the George Street entrance being put in place on 26 February 1889 and the last brick placed by Mr. E. Smith (Chairman) of the company in a ceremony on the 16th of January 1891[2]. The designers were Messrs Plowman, of Hastings, and the contractors Messrs Holme and King, of Liverpool and London who went on to build the Snowdon Mountain Railway. One of the tests applied to the lift was the severing of the haulage ropes to test emergency braking[3]. It is only to be assumed that this was successful.

There were many difficulties in constructing the lift and shaft through the sandstone of the West Hill even though part of the shaft was through a natural cave in the hill[3], making it take much longer to complete and greatly increasing the cost, to £18,800. As a result of these increased costs, in early 1894 the owning company, Hastings Lift Company went bust owing £7,000, and the lift was sold at auction for £5,575 to The Hastings Passenger Lift Company.

Description of lift as planned[edit] 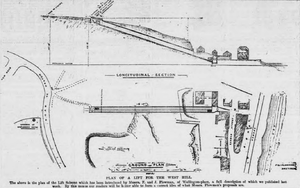 The Hastings Observer ran a report of a meeting held at the old Town Hall in the High Street on the 13th of May 1889, where the designer, Mr. Plowman talked through his plans for the lift[5]:

It was proposed to commence the lift at Jennaway's yard in George Street, having a gas engine to pump the water for the hydraulic lift up to the top cisterns. The mouth of the tunnel would be just under the brow of the hill, where there would be an opening about 60ft. in length, and 20ft. in width. From this point it would be necessary to go up about a score of steps, or they would not be able to get their tanks in without building above the hill, which the Corporation would not allow. There would be two cisterns at the top, to hold about 17,000 gallons, The outlet at the top would be surrounded by a balustrade. From the outlet there would be a path of about 30 yards to the road, just where the new road cut into the old one. There would be a double line of rails, one carriage going up as the other went down, the additional weight required for the descending carriage to the ascending one being supplied by water put in from the cisterns by the attendant at the top.

There would be no difficulty about the number of passengers, for if one person only wished to go, they would take him. There was absolutely no danger, for the carriages would be drawn by two strong cables, and if one broke, there would still be another left; and if the second gave way the only effect would be to immediately stop the carriage, when the passengers could get out and walk the remaining distance. Such a contingency however might be looked upon as impossible. It was suggested that the carriages should be lit by electricity, but they would be also lit by other means to prevent panic if the electric light went out by any accident in the connections or by other means.

The carriages would be built to hold 16 people, but as everything would be overstrong and there would be no cruelty to animals; the cars would be allowed to carry as many as they could crowd in. It might be possible to carry up a bath chair, but an extra fee would be charged. If some arrangement were made by which the tanks were placed in the Ladies' Parlour on the hill, the carriages might be made to run higher and so avoid the steps but this would add to the expense. The bath chairs might be got up the steps by means of planks or by a movable platform worked by the gas engine below. All of this, however would cost additional money.

Hastings Council currently owns the lift, having bought it in 1947. In 2019, the main 'Winding Wheel' was removed for repairs after being found to have developed faults.[6] These faults were in the central hub necessitating a new wheel to be manufactured.[7] This was completed by the 10th of February 2020, however it proved impossible to re-install the wheel due to high winds, the operation being put off awaiting better weather conditions[8], installation finally taking place on the 18th of March 2020[9].