Hastings Town Wall ran across the foot of the Bourne valley, some sixteen feet high and twelve hundred feet in length[1], providing defence both from the sea, and from invaders. 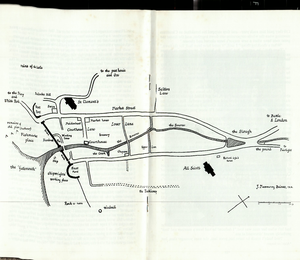 From a note in Brett's Manuscript Histories, it is apparent that at least part of the wall was constructed out of blue-stone.

An accurate date for construction of the wall is impossible, however J. Manwaring Baines suggests that due to the wall crossing the curved line of the ancient Winding Lane which is mentioned in the Custumal of 1356, it would have been after that date.[2] In addition, the levy mentioned below would fix the date at some point during the medieval period.

A wall or some other defence was patently needed for the town, since the French raided and burned it during 1339 and 1377.[2]. The Patent Rolls of Richard II reveal that there was information received that there was a French plan to further invade the coast with a large army. As a result of this, a commission was set up consisting of the following four men; Simon de Burley (Lord Warden of the Cinque Ports, John de Cobham (who had recently constructed Coding Castle to defend the Kentish Marshes), John Devereux and Edward Dalyngrygg (who crenellated Bodiam Castle the following year).[2]

Levy for construction of defences[edit]

A commission was to charged place a levy on the fishermen of 3d in every noble's (a gold coin minted during the medieval period and worth 6 shillings and 8 pence[3]) worth of fish landed at any of the Cinque Ports and spend the money so raised on defences. It is likely that the wall was built using these funds.[2]

The route taken by the wall starts at the West Fort, roughly where the high pavement known as Oak Hill exists at the bottom of the High Street. At this point was the Sea Gate (or Drawbridge Gate[1]). The wall then continued behind what is now known as Hastings Wall flats and across Winding Street. Crossing what was Bourne Street with another gate known as Water Gate or 'Guts mouth[4]' and along the south side of what was Paul's Lane beside the Lord Nelson. There was then another gate known as Pulpit Gate (Town Wall)[1] joined onto the East Fort (roughly where East Cliff House now stands.[2]

Of the forts at each end of the wall, the East Fort believed to have been the earlier of the two, possibly dating to the mid 16th century.[5] The forts are believed to be later additions to the town defences; a reference to finishing works on the East Fort in 1596 could suggest that it was an addition.[5] There is record of a shoemaker purchasing a house adjacent to the wall in 1610.[4]A warrant dated November 26 1695 directed to the Earl of Romsey to pay the town of Hastings £63 for the erection of two small forts within the last five years[4]. An alternative date for constructing the West Fort below the castle is suggested to be in the mid 17th century.[5]

As late as 1766, some 11 guns were allocated to Hastings, provided that the citizens constructed fortifications[6], although whether these were on the sites of the forts or elsewhere is unknown. A further mention of 11 guns on the 'fort' at the east end of The Parade is in Parry's "Historical and Descriptive Account of the Coast of Sussex, Brighton, Eastbourn, Hastings, St. Leonards, Rye..." dated 1833[7]. This is more likely a later defence associated with the Napoleonic threat at the turn of the 18th Century.

The threatened French invasion did not occur and little mention of the wall for some years.


A reference next occurs in 1556 to the Sea Gate, and in 1558 to the walls themselves – possibly relating to what were newly built defences, or replacement of decayed sections[8]; in addition, there is a will dated 1558 of Edmund Franke which left the sum of £6 13s 4d to the "wallys of the towne".[2].

A Survey of the Sussex coast in 1587, in obvious response to the greater Spanish threat, described the ordnance at Hastings including three brass Portugal 'bases', a culverin, two sacres, two minions, and a robinet (Lower).[9][5][10] New guns were acquired in 1627, which, after temporary removal in 1645 to 1656, were finally decommissioned in 1660. Both forts were rebuilt in the early 1690s (following a minor bombardment by the French in 1690 (VCH 1937)).

After the armada had been defeated, Hastings gained the stretch of beach that had accumulated in front of the wall (known as the Stonebeach) from the Crown in its charter and leased it out to local men, mainly fishermen. Many of the little buildings constructed at this time abutted the wall, although according to a grant to Zealous Fuller in 1609 it was expressly forbidden to build in close proximity to the foot of the wall.[2]

Many of these small huts and shops gained permanence and were gradually replaced by the buildings seen in George Street and West Street.[2] In the will of John Isted dated 1556, his son was left "my three little fyshe shoppes lying and being without (outside) the seagate of Hastingse". Of the early buildings, any remnants have likely been destroyed by the foundations of the buildings now occupying the area.[2]

There was said to be a popular thoroughfare from High Street to Winding Street known as 'Town Wall Walk' which remained the property of the corporation until circa 1801 when it was sold.[2] Part of the route of this is believed to lie underneath 59 High Street, together with the wall's foundation.[11]

By 1715 the corporation had built a storehouse within the East Fort and its military function appears to have ceased by 1734. The West Fort, however, remained operable. The Water Gate and Pulpit Gate were still in use in 1750, but the Sea Gate may have been removed by then, and records of maintenance of the wall suggest that it had become less important – and often neglected – from the mid-17th century .[5][10][9]

In 1767, William Lutman was permitted to make a gutter drainage outlet onto the town wall providing "no Damage was caused to said wall and carrying the water of the Eves Drop of the said Building into his, the said William Lutman's own ground."[2]

Ten guns were allocated to the town, although possibly not connected with the town wall or forts.[12] at the time of the Spanish threat. .

A three gun battery is mentioned at White Rock, using guns taken from the San Josef. This battery existed between 1797 and 1832.[13]

At East Street a plaque proclaims that, 'At the rear of these dwellings may be seen parts of the Town Wall which extended across this valley, erected probably in the 14th century'. A blue plaque on the High Street proclaims that 'To the east of this spot was the great Seagate erected about 1385'. A similar notice appears behind the London Trader on the Winding Street segment.

The above-ground portions of the Town Wall still remaining are Grade II Listed (Historic England listing 1043382)(Winding Street) as well as being a scheduled monument.