In Brett's Manuscript Histories, he describes the visit to Hastings of a Steam Road Carriage, which travelled along the sea front, then out of town via London Road with a pause near Gensing Gardens. He is uncertain of the dates, but further research shows that whilst such an engine was described in the Sussex Advertiser of 1844[1]as:- 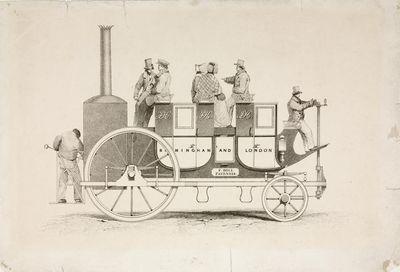 It appears that a Steam Carriage has at last been invented adapted in every respect for locomotion, on common turnpike roads. The carriage for passengers is something like an ordinary stage coach, and is propelled by an engine on two extra wheels, fitted closely to the rear of the carriage, but which can be disconnected at pleasure. The machinery is much simplified, and is rendered so compact that it can be placed upon patent springs of such a construction, that its liability to derangement from the uneveness of surface on common roads is entirely avoided, This appears to be a most important improvement, as it gets rid of the only obstacle hitherto found insurmountable in the way of successful locomotion on common roads. The new carriage cannot interfere with the ordinary traffic on the roads by frightening horses or otherwise, as it is entirely free from smoke, noise. or escape of steam, and is perfectly under control. The first of these desiderata is attained by burning prepared coke, and the noise and escape of steam are avoided, by the very ingenious application of a condenser, into which the steam is conducted by a pipe, (after passing through the cylinders). and there comes in contact with a current of cold air and with cold water, by which means it is condensed, and passes again into the boiler. This invention has the additional advantage of greatly diminishing the quantity of water to be carried, and consequently the bulk and weight of the machine. There are several other important improvements which our space will not allow us to describe; consisting chiefly in the mode of guiding and stopping the carriage, and thus placing it under the most perfect control.

We understand that an experimental carriage, built by Mr. Hills, the patentee, to which many of the late improvements have not been added, has run several thousand miles over some of the worst roads in England, ascending and descending the steepest hills with facility and safety, and maintaining an average speed of 15 miles an hour. This carriage has performed the journey from London to Hastings and back the same day, on two or three occasions, accomplishing the entire distance there and back in less than 8 1/2 hours. It is intended in districts where a greater rate of speed would be required, to lay down wooden pavements, which can be done at a less than a tenth part the expense of making a railway, and on which the carriages could run at the rate of 30 miles an hour if required. We are informed that the carriages are now being built by one of the most eminent engineers in London, and that arrangements are in progress for placing them on the road from Stortford through Newmarket, and from Colchester through Ipswich, to Norwich, early in spring, thus bringing our city within a six hour journey of London. We understand that the necessary notices have been given of an application to Parliament in the ensuing session, for an Act of Incorporation, which shall limit the liability of the shareholders to the amount of their shares.

the prototype carriages had, in fact, been in existence since circa 1841 as Brett describes[2],

In August, 1841, the General Steam Carriage Co was formed for working Hill's patents. It was urged by the promoters that the demand for additional accommodation on some roads really existed, because it was desirable that road locomotion should counteract the exorbitant charges made by the gigantic railway monopoly for conveying goods short distances. The company state in their prospectus "that while they confidently believe the improved steam coach which they have engaged and propose to employ in the first instance to be the most perfect now known in England, they do not bind themselves to adhere to any particular invention, but will avail themselves of every discovery to promote steam coach conveyance." Instead of making short and showy trips on good suburban roads, Mr. Hill selected for his curriculum those roads which, from the peculiar difficulties they presented, were likely to point out every variety of provision that need be made, or circumstances that were to be guarded against. The Windsor, Brighton, Hastings, and similar roads, had been traversed with uniform success. Perhaps no more satisfactory performance could be cited of a common road steam carriage making a trip to Hastings and back, a distance of 128 miles, which was performed in one day, it being accomplished in half the time occupied by the stage coaches'