A miniature tramway operated on Sea Road during 1951. This ran from the Bathing Pool along the seaward side of Grosvenor Gardens on a fifteen-inch gauge to Marina. When not in use the trams were stabled in a shed adjacent to the Bathing Pool. The trams and tracks were made at the Lancaster Electrical Company in Barnet, North London, a manufacturer of battery electric vehicles such as milk floats and whose owner, Claude Lane, had a passion for trams. His factory helped realise his long-held ambition of constructing a 15-inch gauge tram based on ex-Darwen car 23, a car then running on the Llandudno & Colwyn Bay system. The tram was completed in 1949 and shown at local fetes etc leading in 1951 to his idea of a permanent site at St. Leonards[1] 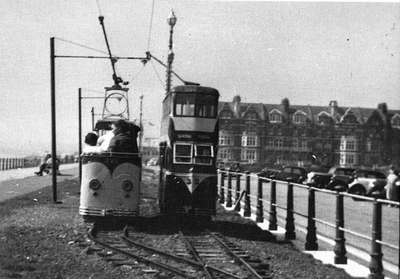 Complaints and move to Eastbourne[edit]

There were a number of complaints regarding the noise generated by the attraction[2], and several petitions against it were presented to the council in 1951.[3] These finally led to its closure in November of that year.[4] The operator Claude Lane, moved his tramway to Eastbourne and set up a one-mile track at the Crumbles[5] which remained in operation between 1954 and 1969[6]