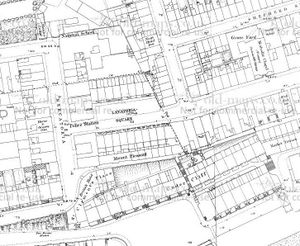 1873 map of the area around Lavatoria.
The diagonal straight line from bottom right is the path taken by Burton's Boundary wall

Lavatoria was originally laid out as a square, with small houses facing each other at the west end of Norman Road, the north side being somewhat earlier (1829-30)[1] than the south, with the northern houses being built by Messrs. Towner, Smith and Thorne and the southern range built and inhabited by Messrs. Putland, Burgess and Mortimer. The shop-fronts on a line with Norman Road were added about fifty years after original construction.

Originally Norman Road was blocked at its junction with the square by a boundary wall that provided access only for foot traffic between two posts on the east side of the square. The wall was taken down around 1841/2[2]

In terms of numbering, from Census returns, it would appear that number 1 was the north-west property in the square, the numbering proceeding clockwise, ending at 18 at the south-west property[3]

Brett in his manuscript histories gives the 1837 occupants as follows[4]:-