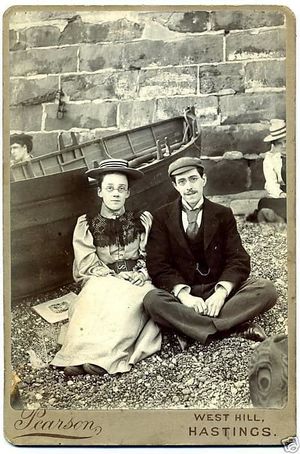 George started his working life as a corn merchant/baker trading on the outskirts of Ashford, Kent. Marrying Eliza Weeks at the Particular Baptists' Chapel at Ashford on August 12, 1877, he claimed to be 22 years old, although if the censuses are correct he may have been only 18! The marriage certificate notes that his father, another George Pearson, was deceased but had been a coastguard. A year after the wedding the Weeks had a daughter - Lizzie Pearson (1878-1924).[1]

Around 1881, George and his family then moved to Hastings. Eliza and George's second daughter, Rosa Beatrice Pearson (1884-1929) was born on February 11, 1884, at the family home in Upper Hughenden Road in Ore (now part of Hughenden Road) with George continuing to work as a baker. Three more sons followed: Percy Frederick in 1886, Leonard Sidney on 28 January 1888, and finally Albert Edward late in 1890. By the time Leonard was born, George and his family were living at 27 Pelham Street in Hastings and George had become a "master photographer".

In 1889 George Pearson's stepson, William, married Sarah Elizabeth Ades (1872-1959) from Ore. She was the daughter of a stone sawyer. By 1891 George Pearson and his family were living at 30 Vicarage Road in the West Hill district of Hastings, sharing house with William and Sarah Weeks and their first child.[2]

George Pearson roamed Hastings beach in summer trying to tempt holidaymakers to have their picture taken. He was not just a, however. He also took studio portraits and advertised "at home portraits, family portraits, groups, schools and weddings taken at short notice at popular prices" (Pike's 1905 Hastings Directory). His work included portrait photographs not only as conventional cartes de visite and cabinet prints but also as postcards. Other postcard subjects included private homes, men at work and a military camp. The cards typically lack captions, but Pearson stamped (or in some cases printed) his name and address on the back.[3]

Pearson was still working as a photographer at 30 Vicarage Road in 1927, but is believed to have retired not long after and moved back to Kent, living at 22 Essella Road, Ashford, Kent until his death in 1938. His estate valued at £1858 10s. 6d. and was left to his widow and son Leonard who was listed as being a furniture salesman[4].

Images stored on this wiki[edit]