In August of 1908, the town's Entertainments Committee organised what was hoped to become an annual event; The Children's Festival in Alexandra Park.

The performers would all be children, likewise the audience. Adults were catered for during the evening. The first such event was held on the 5th of August 1908 and carried the following reporting in the Hastings & St Leonards Observer[1]:-

Next Wednesday sees the opening of the Entertainments Association's fete season, and the initiation also of the policy adopted this year catering specially for the children. The principal event Wednesday the children's festival in the afternoon, though the grown-ups will look in later on, when the dancing starts in the fine ring which has again made its appearance the Alexandra Park. The attractions arranged for the day are many and varied. 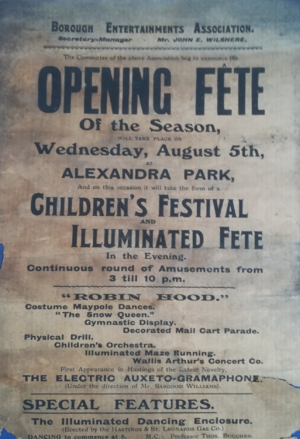 A great feature of them that the children, who are sure to be there in crowds, will entertained by children. A pretty little pastoral will bs played by sixty children specially selected and trained by Miss Muriel Jukes. They will be dressed in bright costumes. and the piece will be a most picturesque affair. The girls of Waterloo Place will also give an operetta, entitled "The Snow Queen." which again an attractive piece, and it well done by the children, under the direction of Miss Floyd. A charming spectacle, amidst the greenness of the lawns and the brightness of the flower beds in the Park, will be the Maypole with its many-hued streamers, around which thirty more children will dance the picturesque and pretty May pole dances which used once to be seen in every village green in England.

While the girls are displaying their gracefulness, the boys will give displays of skill and muscle with gymnastics and physical drill. The members of the 1st Hastings Company Boys' Brigade, a very smart lot of lads, will do gymnastics, in which they do the figure "Human pyramid" which was done before the King at the Naval and Military Tournament recently. The boys of the Hollington School will go through a series of physical drill on the lawn.

Music will be supplied by the children's orchestra of no less than seventy performers, under Mr. Goepel. who has trained the boys and girls in a truly marvellous manner. Their playing really very clever, and they are a most accomplished company of young people.

Further harmony will be provided by quite the latest thing in gramophones, the new auxeto gramophone. This is an extraordinary instrument. making a volume of sound that can be heard hundreds of yards away, and makes as much noise as a brass band. This will lie its first appearance in Hastings.

It is hoped to make a great feature of the Mailcart Parade. The Entertainments Association think that a procession of decorated mailcarts and perambulators would be very attractive, and entries of people possessing such are invited. There are no entry fees, and prizes will be awarded for the best cart. Every mailcart owner entering for the competition will be presented with an admission ticket to the Park. The parade will be in the Park, and if a sufficient number of entries comes in, should be very pretty and interesting.

Dancing is the last item on this long programme. The ring will be erected and lighted as usual by the Gas Company, and it is hoped to see a large crowd again engaging in the pleasant pastime therein. Mr. Goepel's Red Hungarian Band will supply the music. The Park will be brilliantly lighted in the evening with about seven thousand lamps.