The “Amsterdam,” was a Dutch ship of some value, which foundered on the shoreline adjacent to Bulverhythe Road on the 26th January, 1749 at approximately 3 p.m. The time is able to be fixed, due to the crew's firing of the ship's guns to signal distress disturbing a service at St Clements Church. The first on the scene at was reportedly Sir Charles Eversfield[1].

Originally destined for Batavia and other Dutch settlements, the vessel carried a varied cargo. Losing her rudder on a rock off Beachy Head and slipping her anchor the Amsterdam drifted for some time; the crew eventually becoming sickly and reportedly mutinous. A cutter was launched off Hastings with the intention to tow her to a safe harbour, but failed in their efforts - the ship being abandoned off Bulverhythe on what was described at the time as a marshy beach which only took four tides to completely bury the vessel leaving only her masts visible. The masts were later cut off.[2]

In 1827, some forty Bexhill inhabitants succeeded in raising many valuables from her, however the Revenue services intervened and prevented the complete plunder of the wreck. At low tides her ribs and large masses of timber may be seen.[3] 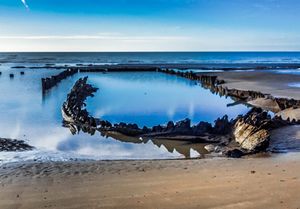