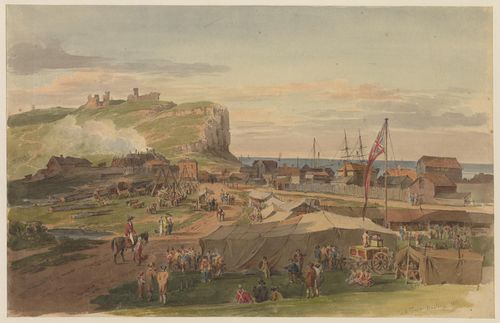 The Rock Fair was held annually on the 26th and 27th of July[1], initially under Cuckoo Hill, roughly in the area of Claremont until circa 1822, following this date, it moved to a field of the Priory Farm[2][3], having it's final location near Mount Pleasant Road in 1862. Although the fair was an annual event, it was cancelled in 1852[4] because of the Cholera that was rampaging through much of the country.

In 1896, a letter was written to the Hastings & St Leonards Observer giving a retrospective view of the Rock Fair thus[5]

The Rock Fair was always regarded by the townspeople as one of the greatest fixtures of the year, and to which people used to come from Bexhill, Battle, and neighbouring villages to see its avenues of fancy goods, its shows of all descriptions, its drinking-booths and dancing-booths, its fruit-stalls, salmon-stalls, oyster-stalls, its stalls for gilt ginger-bread, and sometimes a circus. But important as was this fair in the days when I was young, it would appear to have degenerated, as it were, from earlier times. In the second edition of the “Hastings Guide,” published in 1797, are these words :—" But Rock Fair is the only one worthy of notice, and that has fallen off considerably within the last twenty years."

The fair gradually became more and more disorganised; a committee consisting of the Mayor, Dr. McCabe and Councillor Foster was set to work in 1837 investigating how the fair could better suit the town, although Brett does not give any detail as to the outcome of this inquiry[6]

The Temperance movement undoubtedly swayed the powers that be towards abolishing the fair, a memorial being passed to the Mayor, Alfred Burton in 1849 by James Beck, William Ransom, Frederick Beck, Joseph Pitter, and Frederick Streeter requesting that the fair not be permitted to run for more than two days[7].

There were then reports from the 1850s describing the navvies that had congregated in the town to work on the railway line being near-riotous, 'dissolute characters' and plain-clothes policemen having to attend the fair to detect and prevent illegal gambling. The fair was also struggling to find a location willing to host it, having been moved on from what is now Claremont and Trinity Street, then in a field where Cambridge Road now is; then afterwards back again to the site of Claremont, next in Brisco’s field, (Trinity Villas) and finally Mr. Wyatt's field at Mount Pleasant[5]. The last fair was on the 26th and 27th July, 1862, then the fair was no more[8]