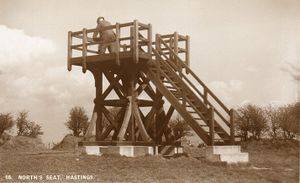 A lookout/survey point constructed on the site of an earlier windmill.[1]. Little remains now other than the brass plaque giving bearings to various landmarks. 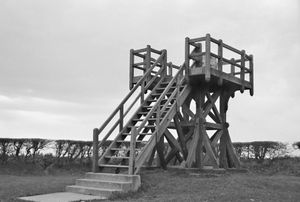 The site is at the highest point on Fairlight Down, visible from some 40 miles away. This led, in September 1787 to the location being used to 'triangulate' (a method used to survey maps) landmarks in France and the UK. The other location utilised was at Dover. To facilitate this a 32-foot high tower was constructed by General William Roy of the British Army. From the top of this, he could survey the landmarks and take bearings using a theodolite. Because both this location and that of the one at Dover were known, it was then a fairly simple measure to plot exactly the location of landmarks visible from both.

The success of this exercise led in 1791 to the foundation of the Ordnance Survey - known to most of us for the range of detailed mapping they produce.

The site was again used in 1825 to line up the measurement of Longitude cross-channel with both sides firing rockets into the sky over twelve nights sending messages across the channel to the mouth of the river Canche in France.

The 'stubby' post or 'Trigonometry Point' a few metres away from the plinth and brass bearing-plate is believed to be on the site of the original plotting tower.

As to the name of North (or North's depending on which source you use) Seat, this came from the late Frederick North who died in 1869. A circular seat was placed on the spot in his honour in 1870. This replaced an earlier windmill on the site (1819-1869)

The seat was replaced with a wooden elevated viewing platform, featuring the brass orientation table at the summit in 1930, this being utilised during the Second World War as an observation point and demolished following vandalism in 1982. All that remains on the site today is the brass orientation plaque and aforementioned trigonometry point.