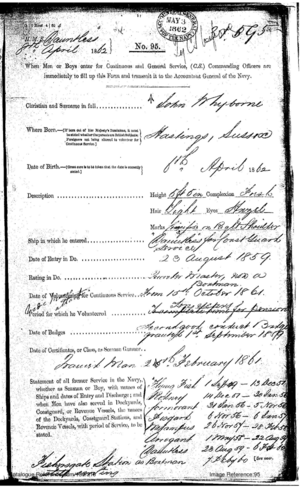 John Whyborn's entry as a Coastguard in 1862 following Naval service

John served in the Crimea campaign aboard HMS Rodney and wrote frequent letters home, many of which were published by Brett in his manuscript histories; most of his published letters cover the time when he was on board HMS Rodney off Sebastopol (see Volume 5 Chapter 52 Pages 124 127 131 & 139, Volume 5 Chapter 54 Pages 226 235 239 et-al.). He is described in his service record as being 5'6" tall with light brown hair and hazel eyes. By 1862 he wore a tattoo of a crucifix on his right shoulder[1]

Whilst serving, he served aboard the following vessels[1]:-