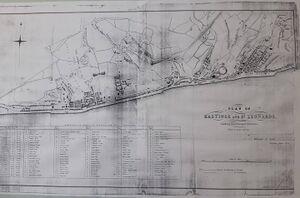 Arriving in Hastings during 1850[1], in 1851, a certain Mr. William J. Gant produced a detailed plan of Hastings at a scale of two feet to a mile and covered everything from the Toll gate on Old London Road and the Priory Stream. This consisted of ten sheets and covered a space of sixty square feet. These plans were delivered and published on the 1st of April 1853[2]. Due to the impressive detail on the plan, Gant was further contracted to produce plans covering the buildings then erected towards and in St. Leonards and employed as the Borough Surveyor[3] for a cost of £40 extra. As the Borough Surveyor, Gant was also requested to produce proposals to solve the drainage issues then facing the town.

In 1856, under some provocation from the Council, in spite of his plans for drainage systems being generally approved albeit incomplete and in some dis-array, Mr Gant made public statements belittling the council resulting in his dismissal and replacement by Mr. Putland - who Gant had originally displaced from the role of Surveyor[4]. This then led to a series of public and private letters and demands being issued by both the Local Board and Mr. Gant and his solicitor brother (J. Castle Gant), resulting in Gant being summonsed in front of the local magistrates bench on the 3rd of April to answer charges that certain of the plans he had been instructed to deliver, he had not in fact delivered. After a hearing lasting five hours, the magistrates found in favour of the Board and Gant was convicted to be committed into custody unless the plans were delivered, Gant's brother giving the bench an assurance that Gant would present himself.

The following day, a Council meeting resolved to delay committing Gant into custody for seven days to give him time to assemble the plans. The plans not being delivered, on the 26th of April, and Gant being nowhere to be found, a warrant was issued for his arrest. At around the same time as the warrant being issued, or just after, a letter was received from Gant in London enclosing the plans and stating that although he thought, should he appeal to a higher court, the conviction would be overturned, imprisonment in the meantime would cause him significant loss of professional reputation[5].

Gant's plan is held at Hastings Museum and Art Gallery.