This was the first 'Dissenting' place of worship established in the town. 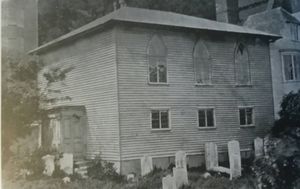 Owing to the stigma of being associated with the Independent or Seperatist religious movements it was impossible to get a builder to construct a chapel for the Congregational Church members in Hastings. In 1805 a piece of land in The Croft was given as a meeting site for these worshippers. A wooden building was paid for by a consortium of London 'dissenters', constructed in London and transported by sea to Hastings and constructed on this site.[1] 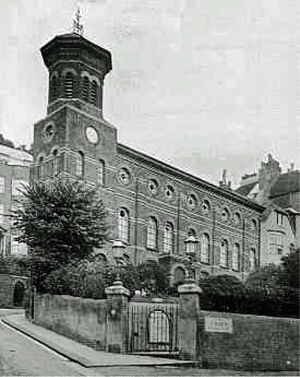 The chapel was reconstructed during 1876/77 by the firm of C. and E. Harman. The new building having been designed by the architect T. Elworthy of St Leonards provided accommodation for a congregation of 450 adults - nearly double that of the previous structure. The structure was laid out over three floors, each floor lit by pairs of windows with circular windows on the top floor. Construction was of Bath Stone with pale yellow, pressed bricks providing contrast to the red kiln bricks used on the walls. A clock was fitted to the east side of the tower, this being donated by T. Elworthy. Five exits were provided to avoid crushing when the congregation either entered or exited the building, irrespective of which floor they occupied.[2]

After the chapel fell into disuse, a local photographer, G. Ivan Barnett utilised the building, both as a photography studio and also as a set for 'The Fall of the House of Usher' for which he was the principle cinematographer.

The building was finally demolished in 1972 and private housing now occupies the site.[4]