Construction of the 1,318 yards long[1] Bopeep Tunnel took place during 1849 by the South Eastern Railways to link up from Warrior Square Railway Station to the Bopeep junction and what had been the West Marina (Bopeep) Terminus, where the lines from London via Battle and West St. Leonards Station and those operated by the London Brighton and South Coast Railways from London via Brighton joined. There was one fatal accident during the construction of the tunnel.

There were a number of difficulties in constructing this tunnel, predominantly the number of springs that required diversion by means of a corrugated galvanised iron shield to divert the water behind the brick facings. Construction of this tunnel was almost complete by the start of 1850 with only some two hundred yards of the bore requiring the brick facing, the first railway tracks being laid on the 16th of October 1850[2]

By 1903, the tunnel could only permit one train to pass through at a time and works were commenced to widen and re-line the tunnel[3][4] 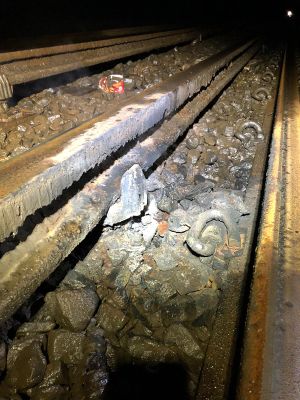 On the 6th of April 2020, a soft drinks can shorted out the live rail causing damage that necessitated the line being closed for about one hour[5]