Revision as of 10:26, 12 October 2020 by RoyPenfold (talk | contribs) (→‎Not proofread: Created page with "{{Hw|sition, to a crowded audience in the Swan Assembly Room; and two days later, he gave in the same room a second oration, his subject being “Nuns and Nunneries”.}} {{H...")
(diff) ← Older revision | Latest revision (diff) | Newer revision → (diff)
This page has not been proofread

sition, to a crowded audience in the Swan Assembly Room; and two days later, he gave in the same room a second oration, his subject being “Nuns and Nunneries”.

P. F. Robertson, Esq., M.P., gave a sumptuous dinner to the Mayor and Corporation at Halton House on November 8th.

Her Majesty the Queen passed through Hastings by rail on the 8th of August, on her way to Portsmouth, and on her return next day to Folkestone, the Hastings station was decorated with flags. The town guns were conveyed to the west side of the West Hill. At 11 o’clock the South-Coast Railway Band commenced playing some lively music, and after two ordinary trains had passed, a third train, with salloon(sic) carriages, containing her Majesty and suite drew up to the station. By that time the Mayor and Corporation were in readiness to meet the royal train. When the Mayor approached the carriage, Prince Albert put down the window. His Worship then addressed her Majesty in these words:- “I have much pleasure in appearing before your Majesty to convey the dutiful homage of the Corporation and inhabitants of the ancient and loyal town of Hastings. I can assure your Majesty there is not a heart in Hastings that does not beat more loudly by the knowledge that you are within our boundary. We pray that Providence may watch over your Majesty and clear away all obstacles in your path; and that you may live many years in great happiness with your noble husband and beautiful children.” Her Majesty said – “I am much obliged to you Mr. Mayor for your kind wishes and expressions.” The loyalty evinced by the people during the few minutes waiting of the train was acknowledged with smiles and bows both by the Prince Consort and the Queen. The platform was again crowded in the afternoon when the royal carriage repassed on their way back to Portsmouth.

“Ethnological Phrenology” was the title of a lecture given at the Institution by Mr. Mackintosh on January 9th.

“An Hour Among the Stars” was the subject of Mr. John Banks’s lecture on the 22nd of January.

“Chronology” was interestingly descanted upon in a lecture, on Feb. 8th, by Mr. J. C. Womersley.

At a Quarterly Meeting, the Committee’s report stated the Institution to be in a flourishing condition beyond all precedent; 98 members had been elected during the quarter, bringing up the number to 394, and with a favourable cash balance of £16. From the report of a committee appointed to look out for a better site, it appeared that with some of the members of the Literary and Scientific Institution in George street being favourable to a more popular mode of conducting that society had originated the- 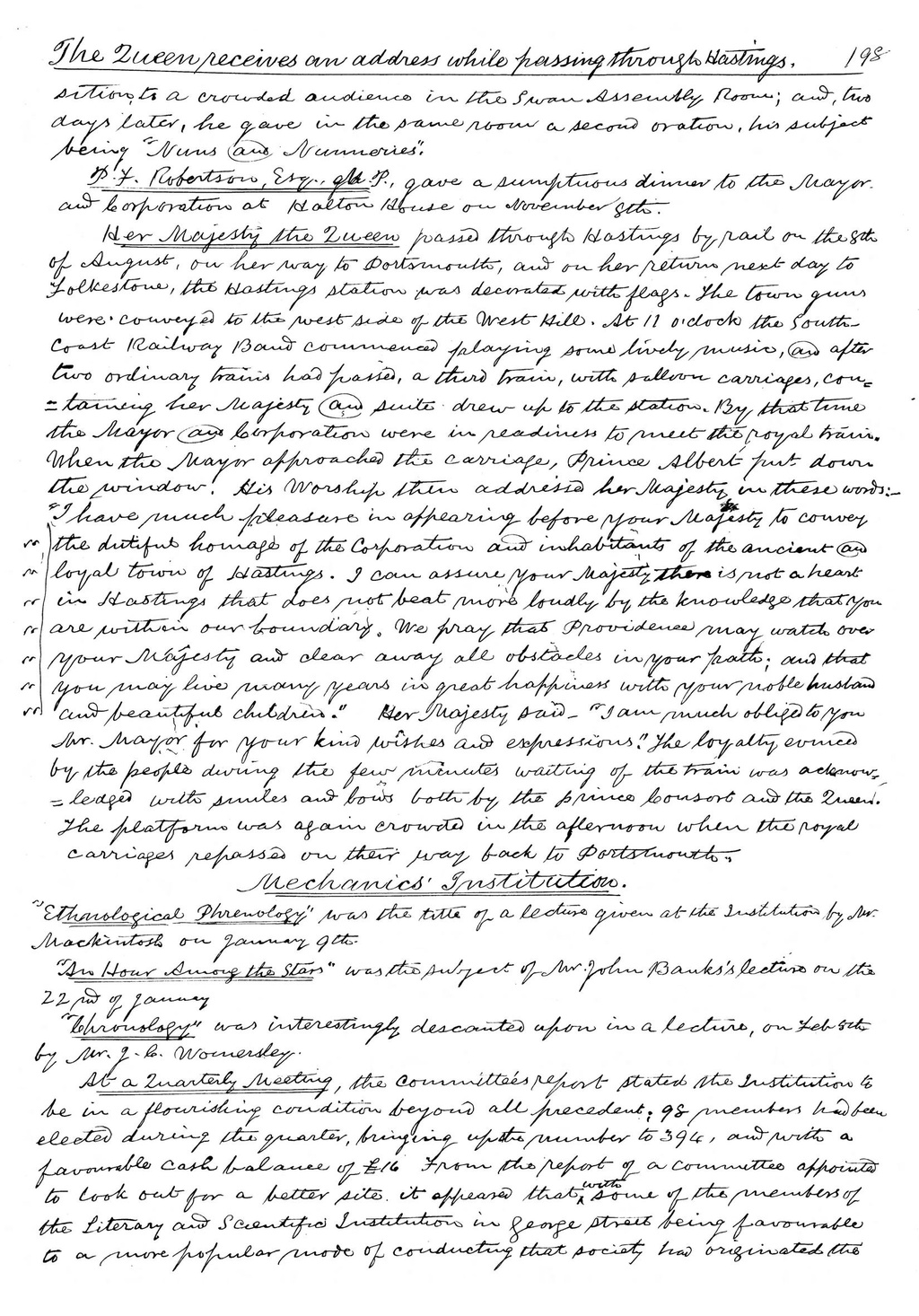