Revision as of 10:54, 7 October 2020 by RoyPenfold (talk | contribs) (→‎Not proofread: Created page with "{{Hw|next two days, in consequence of light winds, the catches were comparitively(sic) few, and the price rose to £10. This continued till the following Monday, Nov. 19th, wh...")
(diff) ← Older revision | Latest revision (diff) | Newer revision → (diff)
This page has not been proofread

next two days, in consequence of light winds, the catches were comparitively(sic) few, and the price rose to £10. This continued till the following Monday, Nov. 19th, when after a freshening breeze, great quantities were again brought in, and the bustle of the preceding week was again observed. The sale was on an average of £7 per last. On the 20th and 21st the catches were simply enormous, some of the larger luggers having 5 or 6 lasts each, whilst the smaller boats had from 2 to 4 lasts each. Six last would be 88,000 fish, and to see that quantity only on the beach in one lump, would naturally surprise a stranger to learn that such a quantity could be carried by one boat, in addition to its nets and other tackle. The price now fell to £5 10s. Besides the quantity purchased for home consumption and that which was conveyed into the villages as well as to Brighton and other towns, the L.B.& S.C. railway carried to London 47 tons on the 11th, 34 tons on the 12th, 30 tons on the 13th, 55 tons on the 14th, 56 tons on the 19th, and 70 tons each on the 20th and 21st. The veering of the wind to the west on the 22nd of November caused very few fish to be caught, but a week later, it having blown freshly from the east, the herrings got into the nets almost as numerously as at first. When brought ashore they realised from £14 to £8 per last. A stranger, however, performed a base trick on the fishermen by purchasing £150 worth of herrings and getting them and himself away without paying for them.

“Gusty” weather and “High tides from 24th to 26th” of October were forecasted in Brett’s Almanack for 1855. This forecast was founded on lunar and other astronomic positions as follows:- The moon was in perigee while entering the sign Scorpio on the 23rd, the planet Mercury being stationary at the same time. The sun was at equal declination to Mars on the 24th, and the full moon was ecliped(sic) on the 25th being also in conjunction with Herschel, while Venus was at quadrature to Saturn. These positions – as similar ones usually do – raised the tidal wave in the Atlantic (probably on the 23rd when the moon’s nearest approach to the earth occurred), together with a cyclonic storm, which reached the south coast of England on the 25th and 26th, accompanied with a heavy fall of rain. On the latter day the conditions were intensified, and the sea appeared to be in a seething ferment. It flowed higher than it had before done for several years. The waves dashed over the parades, and at Hastings it ran into George street by way of the East parade, Albion Hotel and West Street, and after dislodging the York slabs from the Marine parade, threw them against the houses as though they were only wood. It also damaged the sea-wall and groynes at St. Leonards. 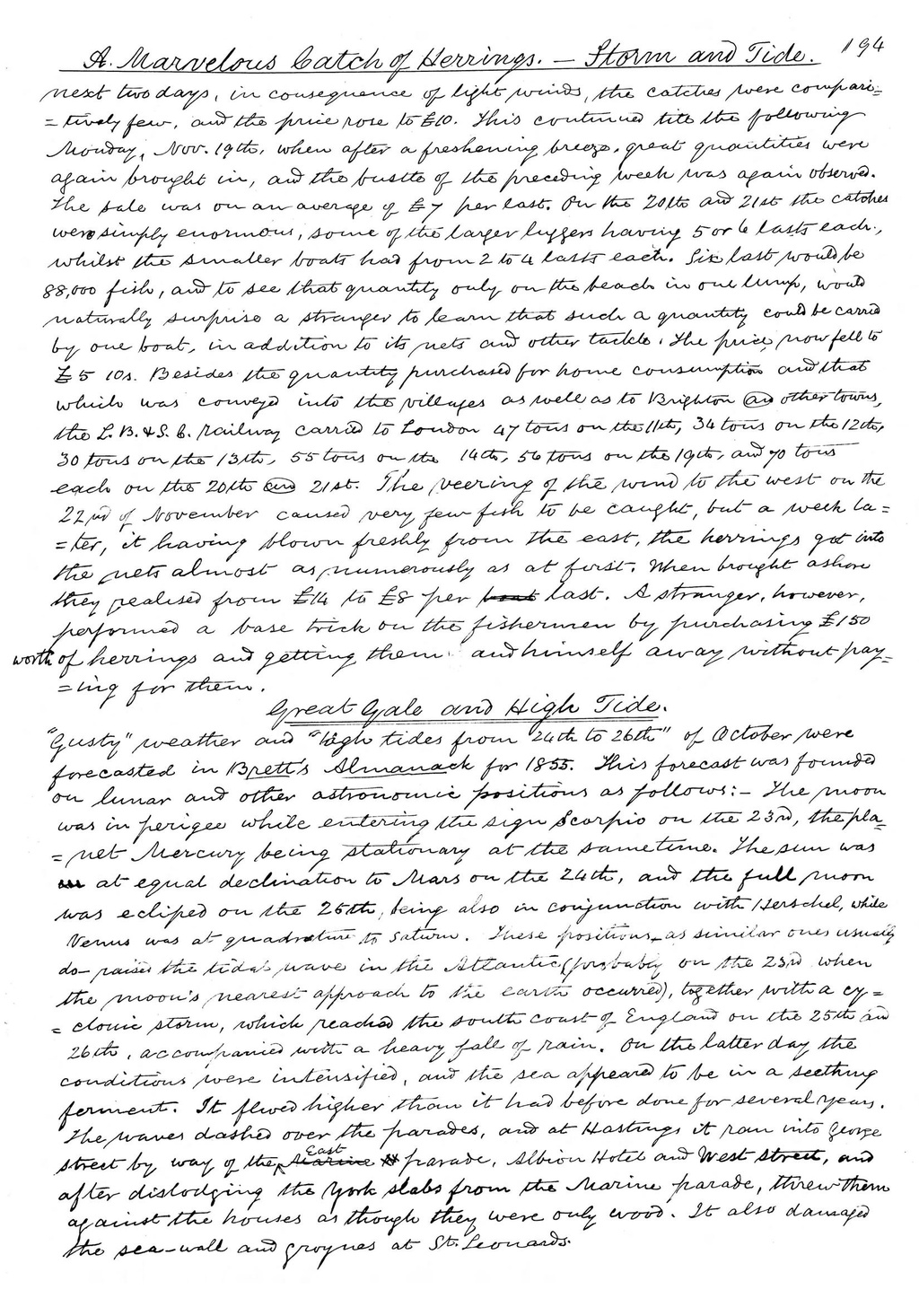