On the 11th of November 1881, the south coast suffered the effects of a severe gale causing the foundering of numerous vessels. The Hastings & St Leonards Observer of the following Saturday (14th) carried the story of the grounding the T. C. Pfluger and Nerissa in one column, the second part, relating to the Nerissa is included in its entirety below[1]:

The storm also caused the foundering of the T. C. Pfluger and extensive property damage. 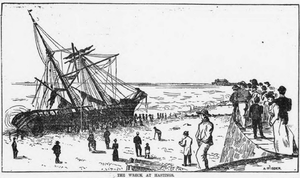 Wreck of the Nerissa

The excitement caused by the rescue of the crew of the vessel which went ashore at Bopeep had not subsided, when a cry was raised that a light, believed to be that of a vessel, was to bs seen rapidly nearing the shore A large number of persons gathered on the Parade, and anxiously watched the spot indicated, and in a very short time a schooner was descried a little westward of the Hastings Pier, rapidly nearing the land. Some Coastguards and fishermen, many of whom had only just returned from rendering assistance to those on board the wreck at Bopeep, and had not had time to change their soaking wet garments, rushed on to the beach, and made signals directing those on board the vessel to the best place available for landing, for it was seen to be impossible for the craft to be kept off. As the schooner entered the surf, the waves repeatedly broke over her quarter, and those on board had to cling to the rigging to prevent themselves from being washed away. In a few seconds the craft, which was being driven before the wind at a great rate, 'STRUCK ON CASTLE ROCKS, opposite Beach-terrace, with fearful force.

Then followed a scene which those who watched it will not easily forget. Immediately her keel touched the rocks, the sea, which was running very high, broached over the ill-fated vessel, and she was turned broadside on. She thus received the full force of the water, which poured over her in volume, and one moment it seemed impossible that the crew would be able to keep their hold. The sails were literally torn shreds by the force of the wind, and the ship had hardly grounded when the fore topmast was snapped asunder and fell down over the side. The Rocket apparatus and the lifeboat were not available; indeed, the latter must have proved useless under the circumstances, for between the beach and the vessel there was nothing but a long line of boiling surf, which every moment, washing over tbe vessel in tons, made the position of those on board more and more precarious. The men on shore, however, displayed the greatest promptitude, and in less time than it takes to tell, surf ropes were procured and made ready to be conveyed to the ship. But how were they to be got there? That was the question which must have suggested itself to not a few of those who watched the most dangerous position of the people on the wreck with THE GREATEST ANXIETY.

But where there are brave hearts and strong arms, human beings have never yet perished for the want of, at least, an attempt to save them, and there were many rough but courageous men on the beach on Wednesday night, who were ready risk their lives in trying to save those of their fellows who stood so much in need of their assistance. Foremost them all, a young fisherman seized a rope, and, dashing into the sea, waded up to his shoulders in the water, and, whilst every moment in danger of being sucked under and drowned, managed with the greatest dexterity, notwithstanding the terrific force of the gale, to successfully throw a line to those on the vessel. 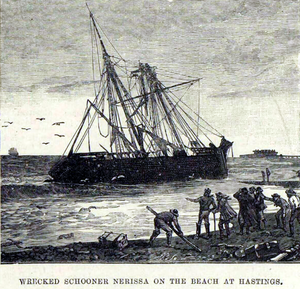 Then a life buoy was drawn on board, and the work of rescue commenced. The crew consisted of four men and a boy, this number including the Captain. Each man in turn placed the lifebuoy round his waist, and, plunged into the tumultuous water and was safely hauled shore, their dangerous journey being watched with breathless anxiety by the crowd on the shore, the greatest excitement prevailing. The boy and the Captain, who was an old man, were now the only ones left aboard the wreck, and could be easily, seen from the beach (for the moon was shining brightly) that each was trying to induce the other to be the next to go on shore. There was no time to be lost, however, and the Captain refusing to leave his vessel till the last, the lad was prevailed to put the lifebelt round him and he was safely landed. The RESCUE OF THE CAPTAIN proved to be the most exciting scene of all. Placing the lifebuoy around his body he plunged over the side, but just as he did so, a tremendous sea struck the vessel knocking it over its side, and there was a breathless moment of suspense for those on the beach, for it was thought that the old man would been crushed to death under the ship. In second or two, however, he was seen at the top of a wave, and a great cheer went up as twenty brave men dashed into the surf, and twenty pairs of hands were extended to the aid of the Captain who was brought to shore in safety, but a fainting condition.

All the crew were in very weak state from exposure and fatigue. The schooner, which was waterlogged, had been drifting about the Channel all day, and those on board had been compelled to remain on deck, and cling to the rigging to prevent themselves from being washed overboard. On being landed they were taken in charge by Mr. W. H. Gallop, the local agent of the Shipwrecked Mariners' Society, and conveyed to a place of warmth, where stimulants were administered. The vessel proved to be the Nerissa, of Aberystwith, bound from Port Macoc, Wales, to Norway, with a cargo of slates. When the tide left her high and dry on Thursday a number of men were engaged in unshipping the cargo, most of which was unharmed. Besides the breakage of the fore-top-mast, a portion of the deck planking, as well as the whole of the bulwarks, were washed away. Though none the planking of the hull itself was broken in, it has been very much strained, the rudder forced out of its place, and the rigging left in a most tangled and damaged condition.