Constructed on land that formed part of Water Mill Garden owned by Edward Milward and sold to John Bryant for establishment of the works. A plan of the land that also included detail of the Priory Farm and Ozier fields was drawn up by James Pankhurst in 1830[1] Gas was produced by the distillation of coal that had been brought into the town by ship from the coal-mines around Newcastle. 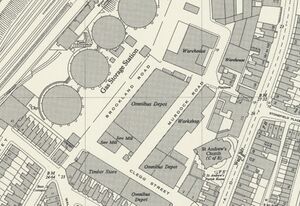 The Queens Road gas works became a prominent landscape feature adjacent to the railway line between Ore Railway Station and Hastings Railway Station, with construction of the Gas Storage Tanks taking place between 1848 and 1893.

Construction of an additional gas-tank holding 150,000 cubic feet of gas took place in 1856, the cast iron base being constructed by Messrs. Newton, Chambers & Co. and the tank itself arriving by ship; the "Phoenix" from Grimsby[2].

A red brick building facing onto housed the showrooms for customers of the company, with workshops behind. By 1908, a series of roads had been constructed on the land which the Gas Company intended to become public highways connecting Brook Street to Waterworks Road. A number of councillors were already connected with the Gas Company, which caused some scandal when the gas-works relocated to Glyne Gap and the same councillors were pushing for the roads to be dedicated, but other councillors were concerned regarding ownership of the various slivers of land needed to construct the entrance and the possible demolitions required to form the entrances[3]. By 1927, a timber yard had appeared on the site and a bus depot was shown on 1938 mapping, with the roads that had formed; Brookland Road, Clegg Street (running parallel to Brook Street) and Murdock Road appearing on 1956 mapping[4]