tion, which with the firelock all slung on my shoulders, was as much as I could possibly carry. All this time the Russians from the other side of the plain, kept sending an occasional round shot among us. But we are too much use to it to care much for a single shot at long range; so, nobody paid any attention to them. As it was getting dusk, I mounted my horse which I had been leading after me over the field, and turned up the road towards camp. Before I had gone half a mile I was stopped by a French picket, who said I must give up the firelock. I refused to give it up to anyone but their officers. So they fetched him & he told me that several persons – sailors and others – had been caught carrying off French firelocks, and that the General had given orders that none were to be taken at all – that they were ‘les armes de la guerre’ and were to be collected. So I was obliged to comply with good grace, though much to my disgust, as it was a perfect musket, with bayonet, and I had given 3/- for it. If I had known that I should have been stopped I could easily have returned by the open part of the plain, as some did, and so kept my trophy. I was allowed to keep the accoutrements. If it had not been getting dark I should have gone back for another musket. R... eluded the picket and has brought home a splendid new Liege rifle, which he says he picked up himself on the other side of the river.”

17th. – We opened a heavy bombardment on the place at daybreak today, and kept it up till dark. Much damage to the Russians and some to us” J. Granville Harkness 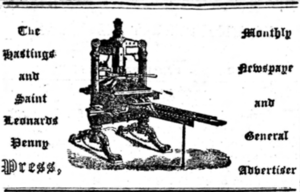 JUNE, 2st, The crew of Captain Yelverton in the Arrogant, destroy numerous Government buildings belonging to Russia; at the back of the island of Katka. They also blow up the fort of Rotsinholm.

JUNE, 23rd, A water spout bursts over the Crimea, in the neighborhood of Balaklava, and a most terrific storm of rain and lightning occurs.

JUNE, 30th, The Compulsory Newspaper stamp is this day abolished. The Magicie steamer, and the Ruby gunboat anchor in Werolax Bay, and destroy 29 large galliots, laden with granite blocks.

JULY, 1st, The barques, Allan Ker, and Earl of Harewood cast anchor in Queenstown roads, within half an hour of each other, having left Peru together on the 22nd of February, and sailed a distance of nearly 13,000 miles, thus accomlishing(sic) the greatest sailing match on record.

JULY, 3rd, The British ships bombard Krasnaia Gorka, during 5 hours, and destroy the telegraph station, barracks and other buildings.

JULY, 5th, Intelligence arrives that 4 English warsteamers and a French vessel are keeping rigid blockade in the White sea, but that Archangel is now in a perfect state of defence; its fortifications having been so strengthened and increased as to be in no danger of bombardment, except by light vessels & gun-boats. An insurrection breaks out in Spain, during which several persons are killed & wounded.

JULY, 7th, The French steamer, Paris and London, founders off folkstone, having been previously in collision with the barque Triton of Amsterdam.

JULY, 8th, The premises of Messrs Deane and Dray of London, are forcibly entered and property to the extent of £2,000 stolen.

The French army encamped near Calais, receives orders to prepare for instant departure to the Crimea. It is stated that a levy of 140,000 men will be drawn for in France as soon as possible.

JULY, 10th, The English, under General Simpson, open a heavy .and effectual fire on the Redan works in the Crimea.

JULY, 12, James Abrahams A Polish Jew, in the pay of Russia, is seized at Dover, and sent-to prison, for offering bribes to the Foreign legion.

The Russian troops are in motion on the Tchernaya.

The siege operations are progressing satisfactorily.

40,000 Russians are advancing on Baidar.

The report of the destruction of Lovisa, in Finland, by a detatchment of the English fleet, is confirmed.

JULY 12.— Cronstadt to Dantzic, a distance of more than 600 miles, is performed by the steam-sloop Geyser in 59 hours. This vessel before leaving the vicinity of Cronstadt successfully shelled and put to the rout a large body of Russian troops. Also, with red-hot shot she destroyed a large schooner; in course of construction.

Explosion of a locomotive engine near Camden town, but fortunately attended by no loss of life.

Murder.—A man of depraved character, named Elijah Bradley is committed for trial at Retford for the murder of Thomas Black.

Collision with a mail train, and coal train, on the Great Northern railway, but providentially, only one or two persons injured.

JULY 14 — Mortar Boats belonging to the English Fleet practise for the first time against some of the Baltic islands, and develop the extraordinary range of upwards of 4,000 yards (2½ miles),

JULY 15.—Colliery accident.—Three men and a boy while being drawn out of a pit at Dunkinfield, are, in consequence of there not being a sufficient control over the engine, thrown a distance of 50 feet above the landing place of the pit’s mouth, and instantly killed.

America.—The steamship Asia arrives at Liverpool and reports numerous deaths as having taken place in New York, from suicides and suns strokes. It also brings news to the effect that upwards of 10,000 persons had attended a meeting to oppose the introduction of the anti-liquor law. and denounced it as fanatical, unconstitutional, and totally inadequate to promote the cause of temperance or other useful purpose. 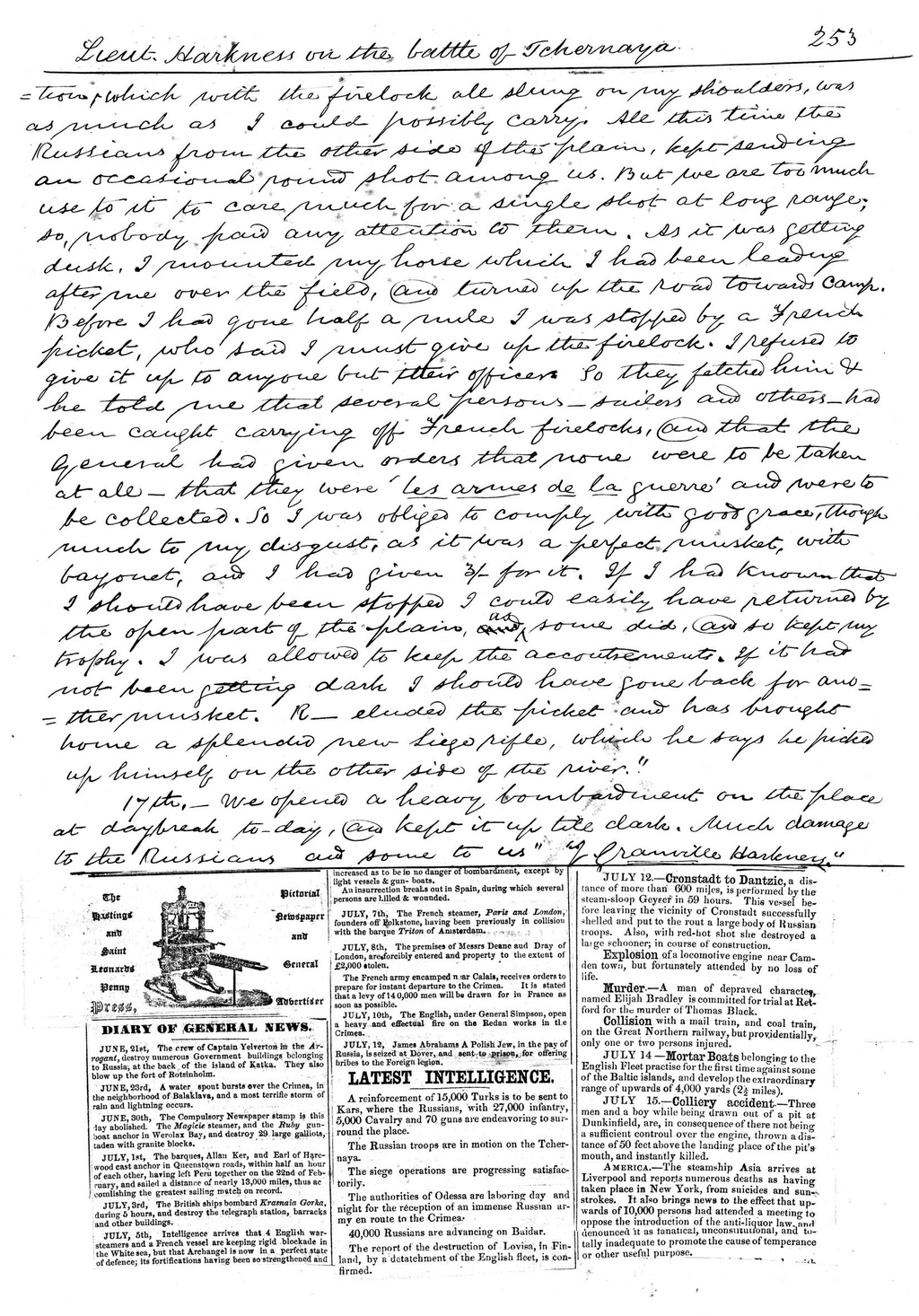