“Aug 16th, - This morning has added another victory to the army of the allies. Soon after daybreak heavy firing was heard in the rear, and the smoke rose from the valley of the Tchernaya. We were roused and ordered to be ready to turn out at a moment’s notice! It was evident that a heavy battle was going on. Those who galloped to the edge of the hills could see it. The positions of the French and Sardinians on the river Tchernaya were attacked by immense masses of Russians with large bodies of cavalry and artillery. They brought with them a flying bridge. Notwithstanding the French making a gallant stand at the tête du pont, they partly succeeded in getting some infantry over the river by the stone bridge and ford, covered by the fire of their heavy guns, posted on the rising ground opposite. None of the latter ever got over the river. The French field batteries were soon got in position; and aided by an English battery which galloped up from near Balaklava, mowed the enemy down by hundreds on the other side, whilst those who crossed never advanced above 200 yards from the river, they being firmly received by the French infantry and put to the rout. The Sardinian position, more to the right; was also hard pressed, and, it is said, their flank was partially turned; but they fought like men, and completely routed the Russians, retaking every point they, in the first rush had been compelled to retire from. All was over by about 8 a.m., and the Russians retired across the plain behind a hill. This, I suppose, will be called the battle of Tchernaya. We remained in camp, all dressed, as a simultaneous attack on our trenches was very much to be expected. At 4 p.m., I got leave to go out, and rode down to the scene of the action. The vicinity of the bridge on both sides was thickly strewn with the dead and wounded Russians. All the wounded French had been removed, and they were taking the wounded Russians on mules by hundreds to the ambullances(sic). I saw very few dead French; many had probably been taken away. The parts of the bridge the enemy brought were in possession of the French. They had also got a Russian gun-carriage, but I did not see the gun on it. Of course, I was beset by Frenchmen with plunder to sell. There were numbers of English officers there. I bought two Russian silver medals and a firelock. Like others, I roamed about over the ground this side the river, looking for what I could find, but I only took two sets of accoutrements and ammuni- 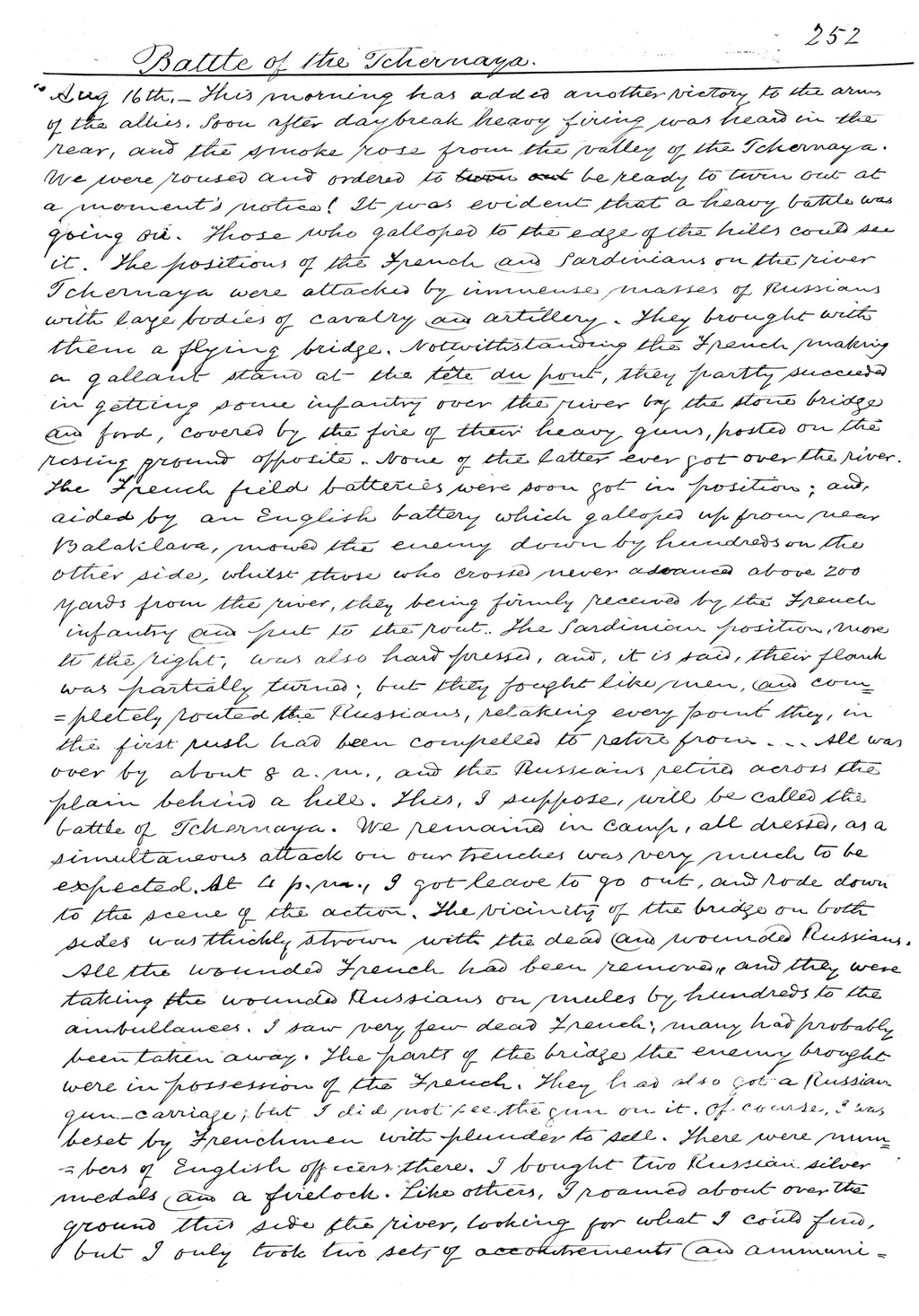