renewed their charge, and an officer and two men got into the trench and were immediately shot. They were at last forced to retire; and whilst going down the hill a shell fell among them, scattering them in all directions. We only lost two killed and one wounded. One of the men who was killed had five balls through him as he was coming off sentry to give the alarm. There are reports that the enemy are getting short of ammunition; but if so, they use what they have pretty freely. We are completely tired out at this work, and I am afraid we shall have another winter of it. I hope they will clothe and feed us a little better than last winter. We have seen the account of the Hango massacre. I expect some of the garrison of Sebastopol will help to pay for it. The cholera and fever are very prevalent, and we have several severe cases. I have been very ill; but thank God, I am quite well again. The weather is very hot and dry. A. B.” (Alfred Bryant)

Lieut. Harkness, in another of his letters, dated Aug. 15th, wrote – “M...., of the Engineers, who was taken prisoner in the sortie of the 22nd of March, has been exchanged, and is now here doing duty again. During his captivity the Russians took him to see the interior of the Redan, and he says it is a tremendously strong work. The parapets are 15 feet inside and amazingly thick; and between the guns are bomb-proofs for the men, so that it is very difficult for us to inflict much damage upon them. He was sent up to Moscow, but on being exchanged, was brought down again to Sebastopol. Today is the Fête Napoleon. The fleets both French and English were all dressed in their colours and fired salutes at noon and sunset. On the night of the 12th, we received orders to turn out at 2 a.m., as a grand attack by the Russians was expected. Our whole division formed up with two batteries of artillery, and we marched to the picket house; here we lay down till it was broad daylight, when there being no appeance(sic) of an attack we marched back to Camp at 5 a.m. The following night I was in the trenches when nothing particular occurred. I think I told you that we lost poor Evans about a fortnight ago. Since that Elton has been severely contused by a piece of shell. His life was saved by a small prayer-book which he had in his right breast pocket. I have seen the book, which is about one-third cut through. He is now well enough to walk about the camp. At the time he was hit he was lying in the trench. As I write this a shot has just fallen in front of our camp, near the tents. They have for the last week taken to firing a gren at an angle of 45 deg., ranging the immense distance of 2½ miles, which drops a shot into the camp some dozens of times night and day, but I have only heard of one man being killed by it. This will be a longer letter than I thought [see page 252 for the remainder]. 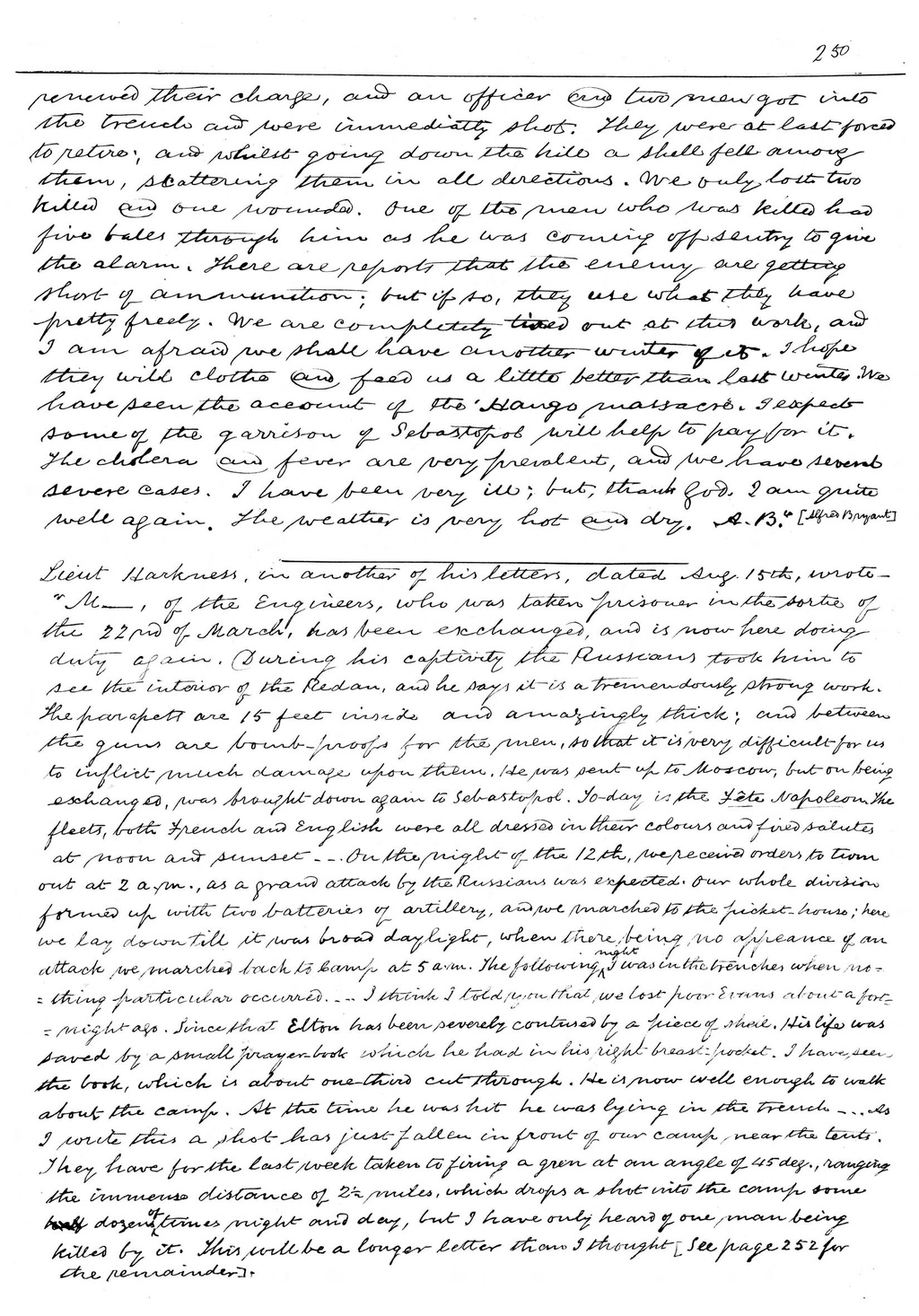