responsibility attaches to some one for the way in which it was managed. It has disheartened our men and given the enemy fresh spirit. 100 of the 1st Battalion and the same number of another corps were told off to storm the Malakoff Tower and Redan Battery, the remainder of the army acting as reserve. We were all in position before daylight, and as soon as it was light enough to see distinctly, the word was given and the storming party rushed out of the trenches and got close up, the men of the Naval Brigade carrying the scaling ladders. The enemy opened a heavy fire of grape and musketry, mowing down our men like grass. They were not supported and were obliged to retire. At the same time an attack was made on the grave yard, where the Russians had some rifle-pits, which were a great annoyance. These were carried at once, and had there been a proper understanding of what was to have been done, many lives might have been spared; but after taking the pits they charged on to the Strand battery, which opened a heavy fire, so that they were forced to retire, leaving between two and three hundred dead and wounded. On the 19th, there was a truce of five hours for burying the dead. Such a sight I never witnessed before, nor do I wish to ever do so again. Some of the men were literally cut to pieces. General Sir John Campbell was killed, and Gen. Escourt has died of cholera. Lord Raglan also died on the 28th. Cholera and fever are both on the increase, and the months of July and August are said to be the worse months of the year. I should like to know what is going to be done, but of that everyone is ignorant. The town has been set on fire in different places several times, but the conflagrations did not extend far. It is great work getting shot and shell down to the batteries. One of our larger ten-inch guns burst a short time ago, killing and wounding several men. I have not been well for several days, and have no appetite. [Hence perhaps, his greater despondency].
The weather has been very hot, and we began to fear a want of water, but some heavy showers lately have made it cooler. A. B.”

Another letter from “A. B.” dated July 21st, was as follows:- “We have not done anything particular since my last, except strengthening our works and erecting new batteries. Our casualties are greater than they have been on account of our being closer to the enemy. There has been no fresh attack on the Malakoff Tower, nor have we opened any great fire since the 18th of June. I believe we are waiting the completion of some new batteries which we are throwing up in advance of all our other works. The cemetery which we took on the 18th of June we still hold, nor have they made any attempt to re-take it; yet, they have annoyed us exceedingly with shell while we have been turning their work against them. It is now nearly completed, but can only be worked in at night. During the day a small party of sharp-shooters are placed there and not a man can move in sight within 900 yards of us without getting a shower of rifle balls about his ears. Several attacks have been made on the French, who hold the Mamelon, but all of them unsuccessful; and in some cases the Russians have paid dearly. Once, the French cut off their retreat and made a frightful slaughter among them. On the 17th they attacked the right of our position on Green Hill. They came up in force, but the 48th, who held the trench, got the alarm in time to receive their first charge with a deadly volley, which staggered them for a time; but they quickly- 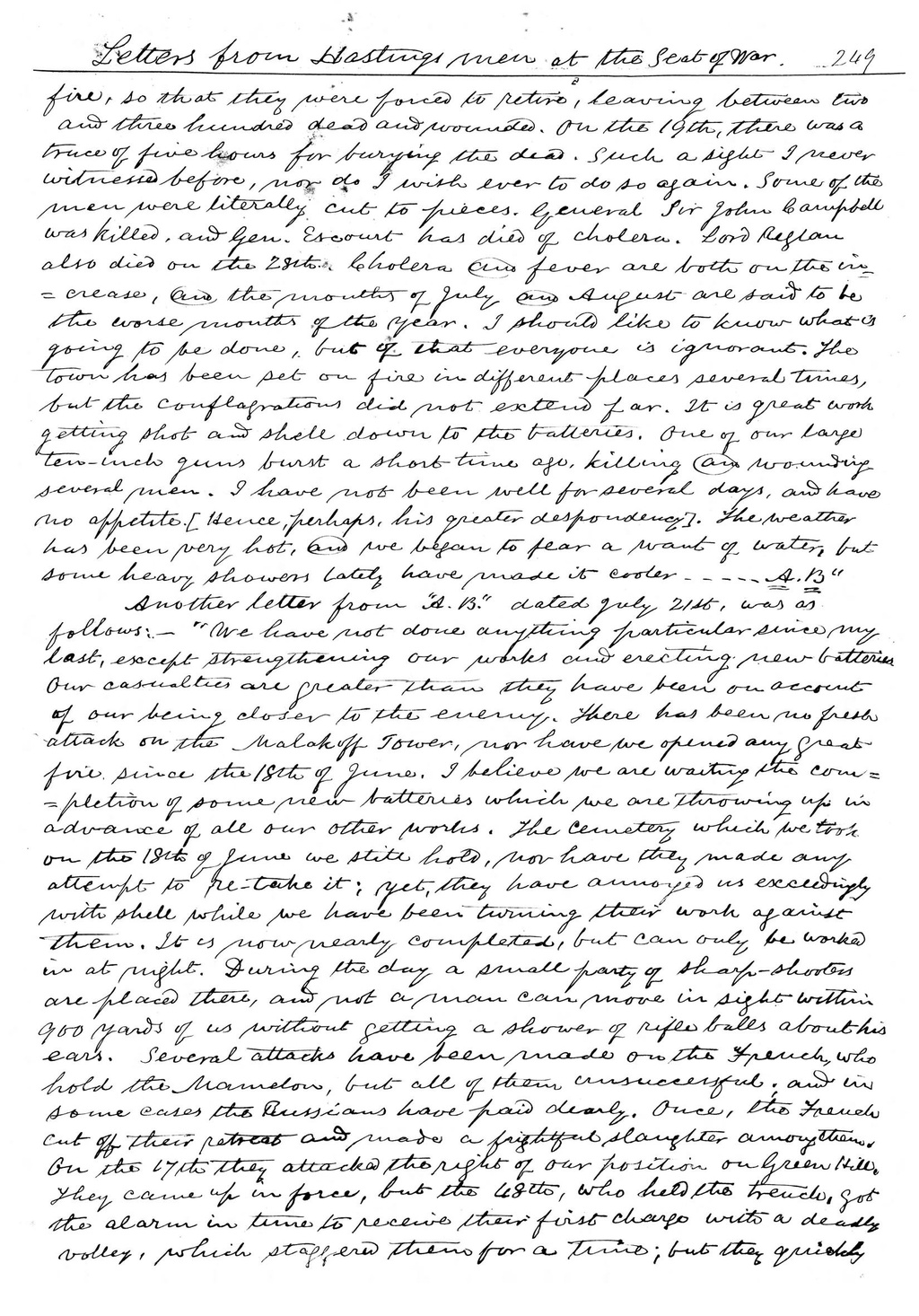