From the Hastings and St. Leonards Penny Press.

JUNE, 4.—The first communication between Helsingfors & St. Petersburg by means of the electric telegraph, takes place.

JUNE 5.—At Hango, the Russians cruelly murder a number of men belonging to the British navy, who, under a flag of truce, are conveying to the shore, some prisoners, subjects of Russia.

JUNE 9. - The officers of the Baltic fleet reconnoitre Cronstadt, and approach to within 4,000 vards the Russian block ships, consisting of 4 liners, 5 frigates & 2 corvettes, moored across the northern channel. Inside these, are 38 gun-boats, 14 of which have steam power, besides 10 other steamers & 17 line-of-battle ships. The island is said to be full of troops, & the additional fortifications immense. The Risbank battery mounts 217 guns; Fort Alexander, 120; Peter the Great, 132; Constantine, 35; Cronslot, 100. On returning from their cruise, the Merlin & Firefly are suddenly made to quiver from stem to stern, by the explosion, under their bows, of some of professor Jacobi’s infernal machines,tearing off their copper sheathing & breaking all their earthenware.

JUNE 11.—Old Smithfield, or Smoothfield, as it used to be called, is finally closed, after having been a fair & a market for more than 200 years.

JUNE 13.— Having performed its mission, during which, at Yenikalé it escapes the trial of an immense submarine battery, the Kertch expedition returns to its former rendevouz.

JUNE 18.—Queen Victoria, visits, at Chatham & Brompton, upwards of 1,000 Crimean invalids, putting questions to them, & manifesting the greatest solicitude on their behalf—The French & English make a combined attack on the Malakoff works, the latter also feigning an attack on the Redan, & the ships throwing shot & shell into the sea-front, but after a most sanguinary conflict, the allies are compelled to retire, having suffered a loss in killed & wounded of 1,295 English, and nearly 4,000 French. This non-success is attributed chiefly to the Russians having, on the previous night, dug a ditch, which rendered the scaling ladders of the storming party too shut. It is also said that, the Allies failed in bringing up their supports.

JUNE, 19.—Immense failures have taken place in South Staffordshire, chiefly in the iron trade; the liabilities of one firm alone being £116,000.

JUNE, 20.—A Russian ukase orders that baptized Jews are now to furnish recruits to the army.

JUNE 22.—Sir John Dean Paul, aged 52, William Strahan, 47, and Robert Makin Bates, 64, late bankers, are placed in the felons’ dock, at Bow street, on a charge of having fraudulently disposed of certain securities which had been intrusted to them for safe custody by the Rev. John Griffiths, Prebendary of Rochester Cathedral. No similar proceeding for many years past has produced such a profound sensation, there being so vast a number of sufferers, through the bankprutcy of the firm.

JUNE 24.—A large concourse of persons assemble in Hyde park, for the purpose of shewing their dislike to the proposed new Sunday Bill. The groans & hisses with which the aristocracy are assailed, afford unmistakeable evidence that the present temper of the masses is not one that will submit to opposite laws for rich & poor.

JUNE, 29.—The Baltic fleet having returned to its anchorage off Cronstadt, 46 infernal machines are discovered and destroyed; one of them exploding, on board the Exmouth, while being examined, and severely wounding Admiral Seymour and Capt. Lovus.—The third squadron, with gun-boats &c., under the command of ADMIRAL Barnes, arrives off Nargen Island.

(From the Globe of Saturday) War Department, June 30th.

Until 4 o’clock on the evening of the 28th, his Lordship had been progressing to the satisfaction of his medical attendant, when alarming developed themselves, attended by difficulty of breathing, which gradually increased.

From 5, p. m. he was unconscious; and from that period he gradually sank until 25 minutes before nine, at which hour he expired.

The event has plunged the whole army into the most profound grief.

A letter was received during the week which ended on the 7th of July by Mrs. Butchers, informing her that her son, an artilleryman in the Crimea, was killed on the 27th of May.

Another letter - and this time a desponding one – was received from “A. B.” by his brother and sister, dated “Camp before Sebastopol June 30th, in which he said, “It is now seven months since I left England. You have seen by the papers what the army has suffered since that time, and to all appearance it is not half over yet. You will have heard before this reaches you, of the disastrous affair of the 18th, and the useless sacrifice of life that took place on the day. God knows that a heavy- 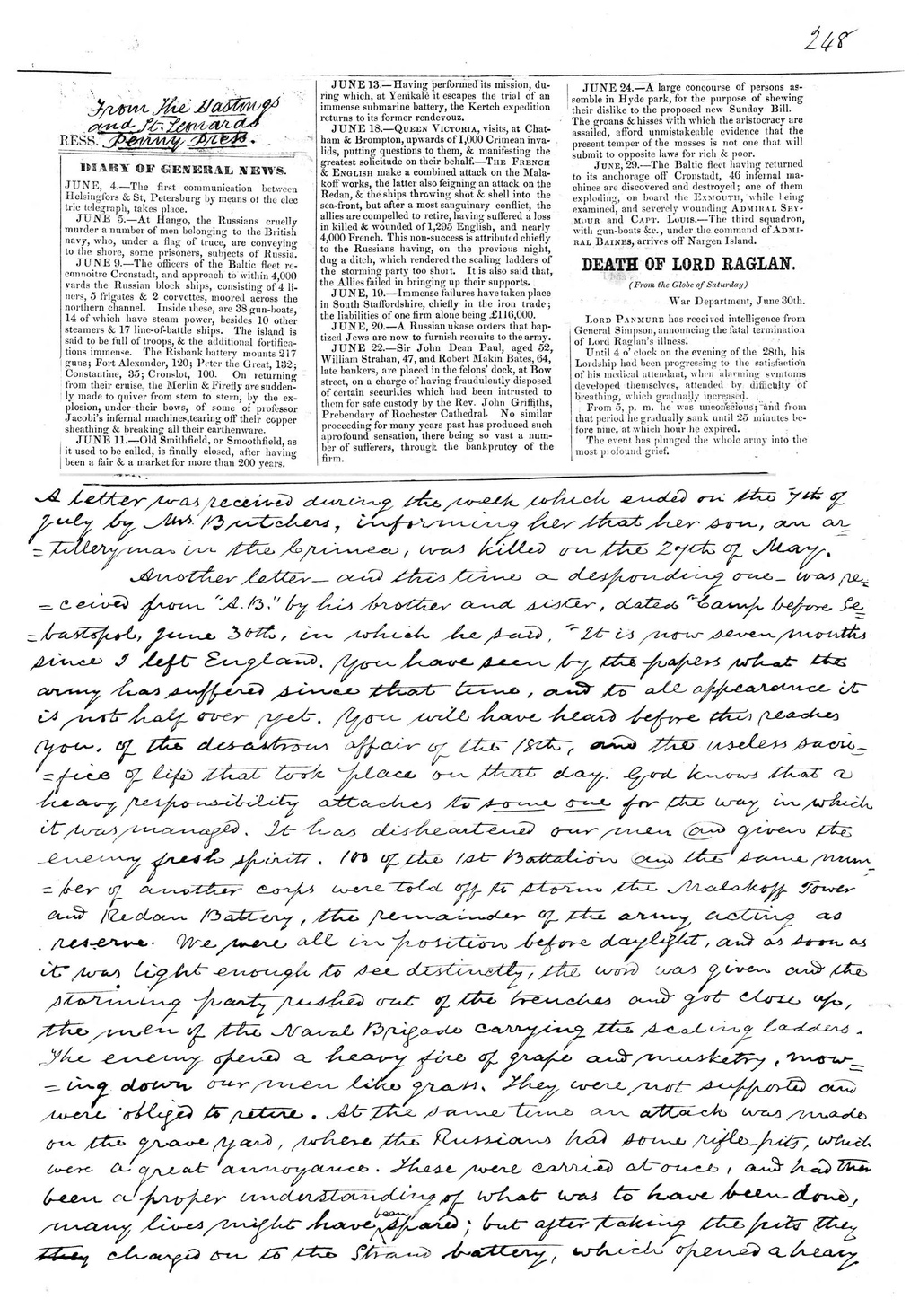