Think how proud we shall both be when I can show you mine.”
“J. Granville Harkness”

The following is another letter of the same date from one of the Hastings men. In writing to his brother and sister, he says:-
“No doubt you have heard before this how we are going on. Since my last, our troops have taken Anapa, with an immense store of provisions, guns, ammunition &c., but as I was not there, I cannot give you the particulars. The Rifles furnish thirty men every day as sharpshooters in the advanced trench, and whose duty it is to pick off any unfortunate who may come within range. I was one of the party down there on the 6th, when, at 3 in the afternoon the bombardment opened for the third time, taking the Russians completely by surprise. It was nearly three quarters of an hour before they replied, except by a few guns which they had been firing before. Every one of our shots told, and gun after gun was silenced till dusk, when their firing ceased altogether. We were between the two fires, the shots all passing over our heads from both sides, which with the smoke and noise was overpowering. While this was going on, we kept popping away at the enemy’s embrasures to annoy them while loading, our only guide being the heavy smoke which rolled away after the gun was fired. We had but a few casualties on our side, I cannot tell the exact loss, but I believe it to be about six killed and 17 or eighteen wounded. The Russians must have suffered severely. One of their batteries was silenced after firing only two shots. It was horrible to see our shells bursting inside their batteries and blowing the platforms of their great guns into the air. We continued the fire the whole night, and on the 7th our advanced battery, which was silent yesterday, opened fire on the town in addition to the others, the enemy replying but feebly. At five o’clock an attack was made by a strong party of our allies on the Mamelon. They soon drove the Russians out of it, but the slaughter was dreadful. After taking the Mamelon, they attacked the Malakoff tower but did not suceed(sic) in taking it. However, we still have the Mamelon, and the guns which were in it were turned on the Malakoff. The dead and the wounded were lying in heaps around. I had a good view of it although I was not engaged. But we were under arms in case we might be wanted. The tower is to be attacked again to-night by Sardinians, French, Turks, and English. Sebastopol cannot stand much longer, their fire is getting slack, and they appear to be getting short of ammunition.
A.B” [Alfred Bryant]
[ see illustration on page 251 ] 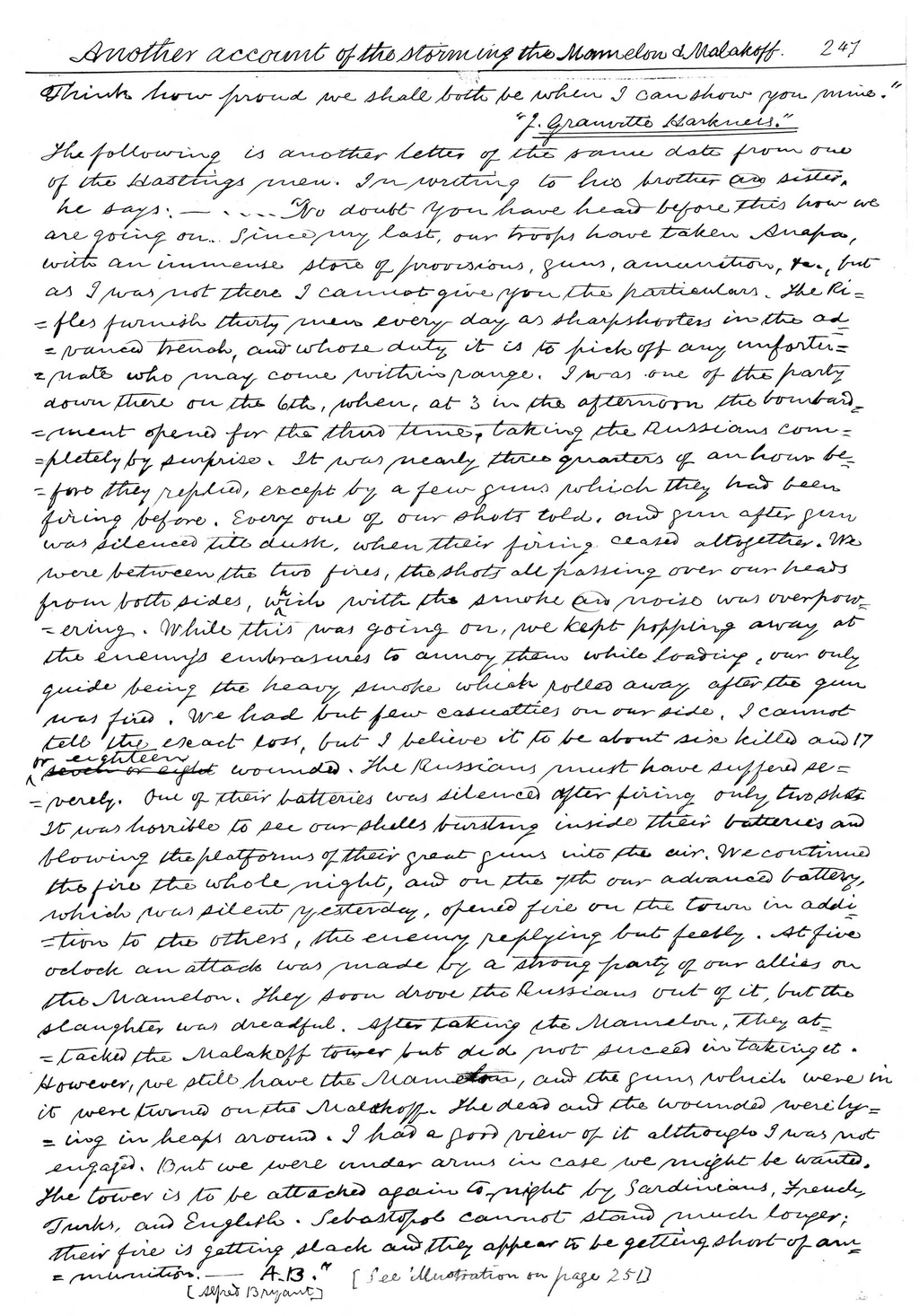