moment the French reserves came up in steady columns, and the fortune of the day again turned against the enemy. The French gallantly assaulted the Mamelon a second time and were completely successful, driving the Russians back to the Round Tower. This time they did not attempt to follow, but wisely contented themselves with retaining the Mamelon, which, I believe, was all that was intended. It was now dusk, and I ought to have been relieved, having been in the trenches 24 hours, and had a battle into the bargain. During the night our mortars kept firing, and the Russians made several demonstrations of attacking us, but we were always ready, and received them with so brisk a fire that they did not come very close. At last, at three this morning, my party was relieved by Capt. Fyres, of the Rifles and 200 men. Richards and I had 160. There was also another party of the 55th under Capt. Cure and Capt. Elton, Lieuts. Scott, Stone and Williams, and 200 men. They came on with the reinforcements at 5 p.m., and were relieved about 5 a.m. I grieve very much to say that poor little Stone was shot dead by a rifle-ball, while showing the utmost gallantry in crossing the Russian trench. Poor little fellow, he only joined a month ago, and was quite a child – a handsome blue-eyed boy, apparently not more than sixteen, and was much liked and petted by us all. We bury him tomorrow. The 88th lost many officers I am told. Early this morning, some of the 62nd officers were sitting together in a trench when a round shot came in and killed Col. Shearman and Captains Forster and Ingate; also three or four men. Major Dickson was also killed by a rifle-ball – four senior officers of one corps in a single night! I do not yet know our total loss, but you will see it in the papers as soon as this letter arrives. My company lost two killed and four wounded. We have, undoubtedly gained a great advantage in taking the Mamelon and Quarry, which must be our consolation. Lord Raglan and staff visited the different regimental hospitals today (ours included) and spoke to the wounded. Trevor, of ours, who was hit in the elbow, some seven or eight weeks ago, is now able to walk out a little and is going home. His elbow is stiff for life. I will always write as often as possible, particularly after any occurrence. I pray God to protect me as He has hitherto done for your sake, as I know how very anxious you are. I see lots of our fellows who went home before Christmas have got their medals from the Queen. How much more we have earned them who have gone through the hardships of the winter and the innumerable battles of the trenches for eight months!- 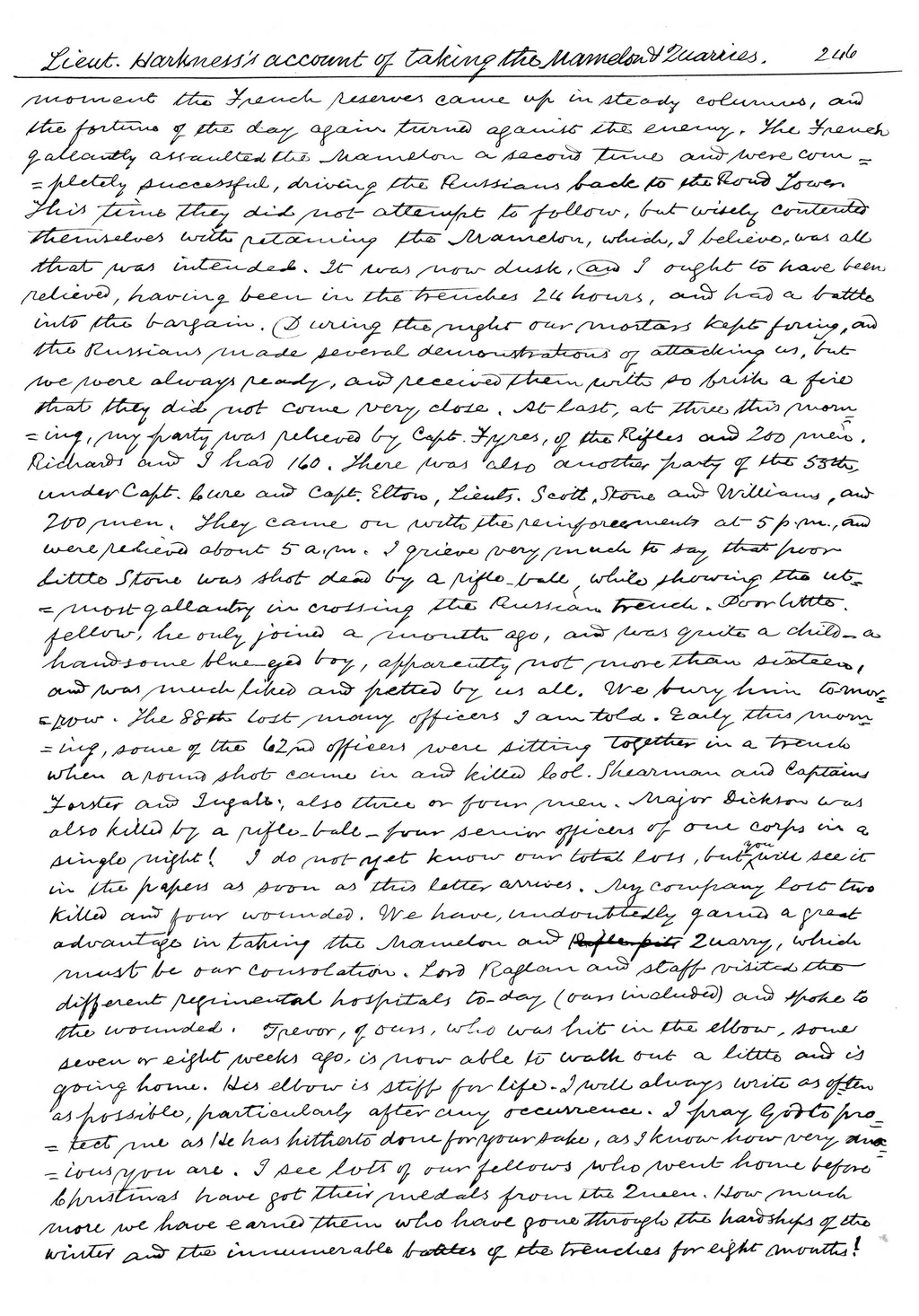