From a letter written by William Broom, of the Sixth Battalion, Royal Artillery are the following extracts.
“June 7th. – The cholera is very bad out here, but we have not got it so bad in our own company, having had only 20 die in a month; but several have died from sun-stroke. I have escaped all of it as yet, but of course I cannot tell if I shall not take it. We had a grand charge with the Cossacks the night before I wrote this letter. We lost six men and ten horses. My off horse was shot under me and my rode horse was wounded in the leg; so that I lost both horses, but soon had them replaced. We took an 18-pound battery and two three pound batteries, and as I never got a wound I have been lucky so far. On the 1st of June we were in the trenches, and just as we were coming out there was a shot fell down about three yards before us, but we all fell on our faces and escaped it. So you must think what is the situation. But for all that my spirits are as strong as ever. We have taken a number of hills about Balaklava, and have driven the Cossacks a good many miles away.
William Broom.”

The following is another letter from Lieut. Harkness, which, like his previous letters, is fuller of details than those from other Hastings men, and therefore of greater general interest. Under date of June 8th, the gallant young officer wrote:-
“By that horrid telegraph, you will have heard of course long before this reaches you of the assault of yesterday afternoon on the great Mamelon redoubt and the Quarry rifle-pits in front of the Redan battery. Our attack was successful and we now hold the Quarry, whilst the French have got the Mamelon. Of course it was not effected without considerable loss; but, thank God! I am unhurt, with the exception of a slight cut on the head and one in the left hand from a shower of stones knocked up by a round shot which killed two of my men and wounded others. It is so slight as not to require any attention of the doctor. To begin at the beginning, I went into the trenches at 8 on Wednesday night. The bombardment, which opened at 3 p.m. was kept up heavily with the mortars all night and up to the time of the assault. There was little or no musketry during the night. At about 5 p.m. on Thursday, large reinforcements arrived in the trenches. The enemy, taken by surprise, ran back into the Mamelon, and the firing now became heavy. Presently the French scaled the Mamelon, and the Russians were completely driven out of it, and retired to the famous Round-Tower batteries. The French, in their ardour, followed them up to the very ditch of the Tower, which, unfortunately, proved an insurmountable obstacle, from its great depth and the chevaux-de-frise at the bottom. After vainly endeavouring to cross it – the Russians keeping up a terrific fire from the parapet – the French were obliged to give it up and return to the Mamelon. About this time, we English got the signal, and away we went, and drove the Russians out of the strong Quarry breastwork which covers the Redan battery; and it is so strong that the fire of our batteries has not much damaged it. Our party advanced even to the ditch of the Redan, but being in small numbers, and finding great obstacles, fell back to the Quarry, about 80 yards. We also had possession of their two most advanced lines of trenches, but finding the second one completely enfiladed, fell back to the outer one, which we still hold. One part of the trench was fiercely contested six or seven times, but we have got it. They kept up a heavy fire of shot, shell and grape upon us from their batteries, but our own batteries firing over our heads, kept theirs a good deal in check. Meanwhile, the Russians issued from the Round Tower in thousands and attacked the French in the Mamelon, who, for want of support, were driven out, disputing the ground inch by inch till very nearly driven out of the Russian trenches. At this critical- 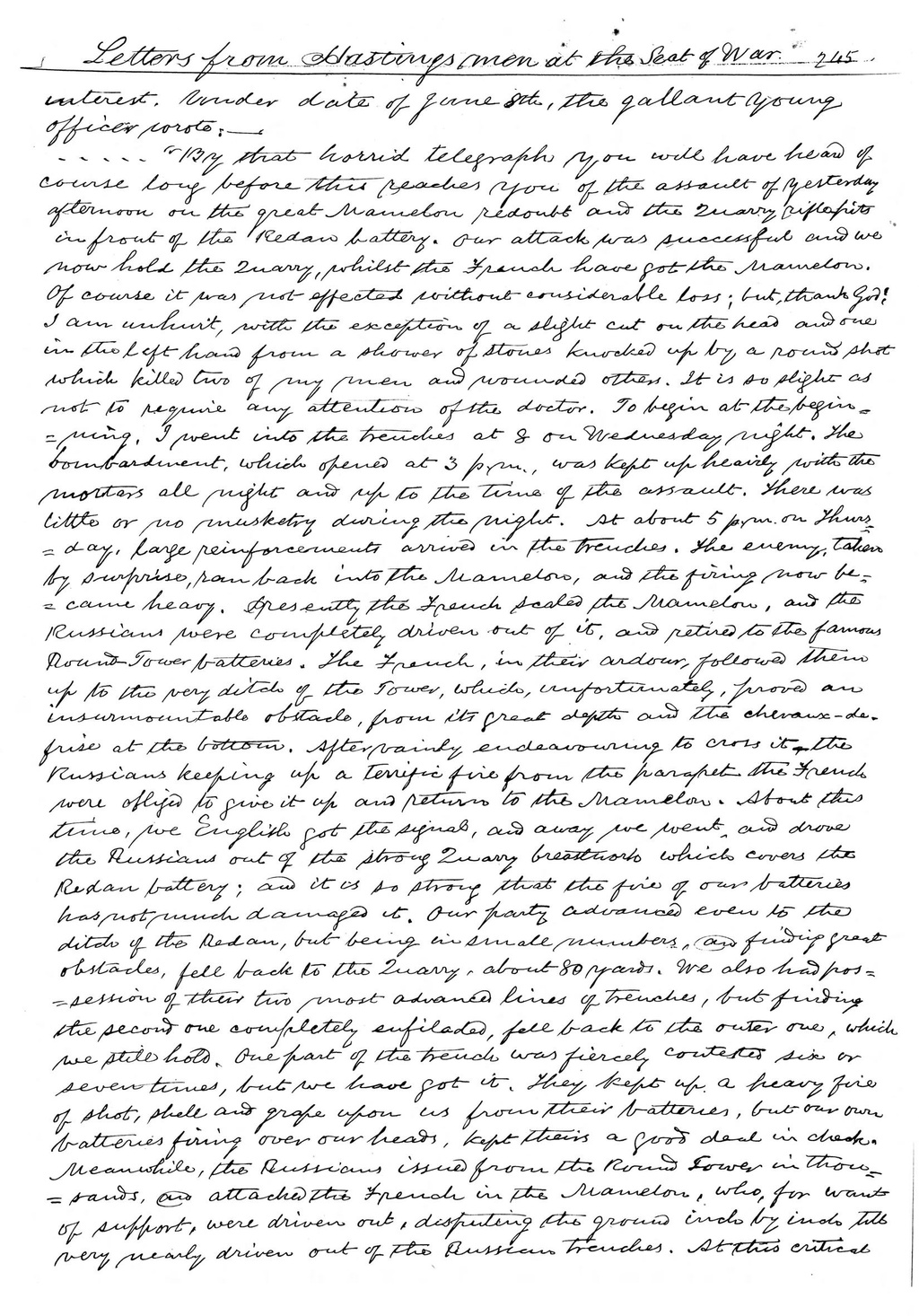