to be up and doing daily; and no one day have I been absent from my arduous work. I am happy to say that the general health is rapidly improving and the mortality diminishing, our average now being not more than five daily. All things you sent are most acceptable; and in the name of our poor sick; and in the name of our poor sick and wounded, I beg you will accept my best thanks. Stores of every description are flowing in from all quarters. Believe me to be very faithfully yours, Charles Sillery, Major, A. A. G.” “To Rev. J. A Hatchard, St. Leonards-on-Sea”

“To Mrs Hatchard, St. Leonards” “Scutari, Constantinople, Ap 17.
“Madam. – Your letters 17th of October, 1854, addressed to Ms. Holmes have just come to hand this very day, exactly six months after being written. No doubt you often thought it strange that your kind consideration for the wounded at Scutari did not elicit even an acknowledgement. This at once explains the reason your parcels were opened only a few days ago. The only way in which I can account for it is that by stating the outcry that was made about the scarcity of lint, &c. caused such an influx of contributions of that description, and supposing yours to have been among the first arrivals and to have been at once put into store, all subsequently received would be used before yours could be got at. In the mean time immense supplies were sent out by Government; and thus it may have come to pass that what was sent six months ago is only now brought into requisition. Whether this is the case or that there was some delay in the delivery at Scutari I cannot say; but how often does it occur that benevolent intentions are frustrated by events which cannot be controlled. The medical store keeper tells me that both your parcels were given to him together about a month ago, and that on opening them the other day, he found the letters for Ms. Holmes. I consider it my duty on the part of the sick and wounded to thank you most sincerely for your kindness and for your liberal offer to supply their wants; at the same time I can honestly assure you that there are now abundant means on the spot for supplying all their necessities. What was or was not the case six months ago will not answer any good purpose to go into, especially as the fullest information is being elicited by the parliamentary commission of enquiry now sitting. I must say that I am truly sorry that you should not have had the gratification of hearing that your parcels had arrived when they were really needed and that they contributed to the alleviation of the sufferings of our brave fellows, who so nobly upheld the honour of their country in the Crimea. I have the honour to be, Madam, your most obedient and humble servant. J. Holmes, purveyors clerk.” 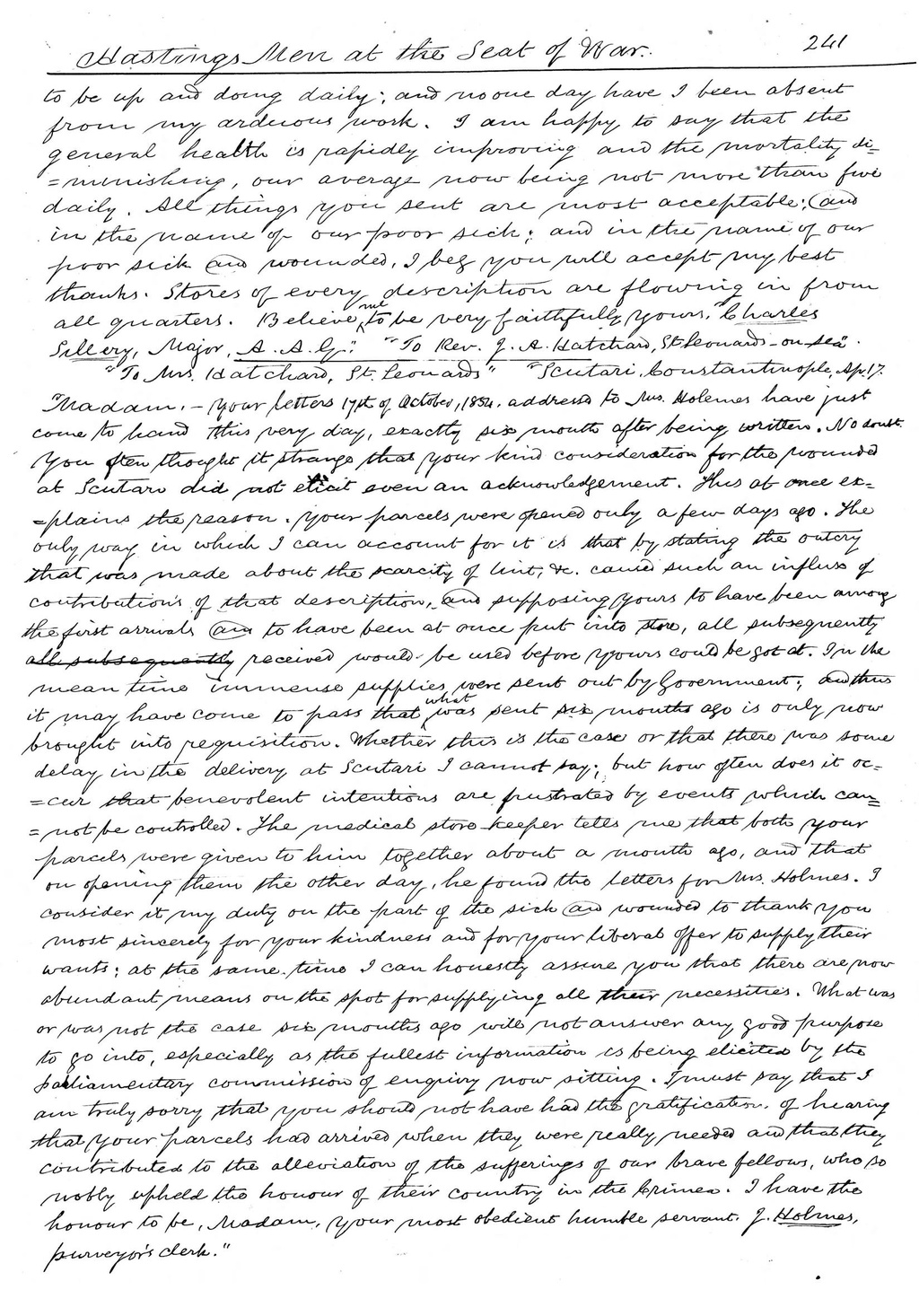