we had a long yarn about Mr. Phillips, Mr. Mazlin, and Dick, and all other people at home. He is quite well and sends his best respects to you. . . I am happier on shore than on board ship, though it is warm work at the batteries; but there is a kind Providence to protect here as well as at home. I don’t seem to mind the Russian shot now, for if you put your trust in the Lord, He will watch over you. If it should please the Lord to take me from this world, I hope when the Rodney arrives in England you will go down and see my chum, for I have given him what few things I should like you to get. When you write to me, direct to Thomas Raymod, sailmaker, H.M.S. Rodney Black Sea fleet. John Whybourn”
“May 11th. I am now able to write a few more lines.
“We have to go to Balaklava, a distance of six miles for fuel to cook our victuals with, and this we do when we have a day off. The soldiers get theirs up by rail, but poor Jack has to bring his up himself? We don’t fire a shot from our batteries now, although the Russians annoy us very much. We have advanced a four and five gun battery 500 yards nearer Sebastopol, and got very heavy guns in it. It will be very heavy work for us the next time we open fire, as we are now so close to one another. They made a sortie on our works last Wednesday right where I and George Mantel were. Our soldiers saw the Russians coming, and as soon as they got to our parapet, our men poured a volley into them and gave three cheers. It was half an hour before they could be driven back, but when they did retreat, our men again killed them like flies. All we had wounded was seven, and not one killed, although all the time the Russians were firing shot and shell into us. Such an awful sight I never wish to see again; for, what with the howl of the Russians and the cheering of our men, even the noise was dreadful. Now I want you to send me two pairs of leather spadlashes and enough fustian to make a pair of trousers; also a pair of navvy’s strong boots, with large nails and pelts.” “John Whybourn”

The following letters were received by the Rev. J. A. and Mrs Hatchard, on the 9th of May, 1855. “Scutari, Turkey, April 17th, 1855. “Dear Sir, Two days since your letter of the 17th of October was put into my hands by an officer who had found it in a bundle which he had opened in one of the surgeries of this hospital. This will explain why I have not replied sooner. Since the date of your letter, we have passed over a period full of incidents of terrible disease and mortality; and my only wonder is how I have been able to bear up against the trials which beset me. Under the protection of a most merciful God, I have escaped death and even sickness; for, though I have been at times ill, yet the Lord has enabled me- 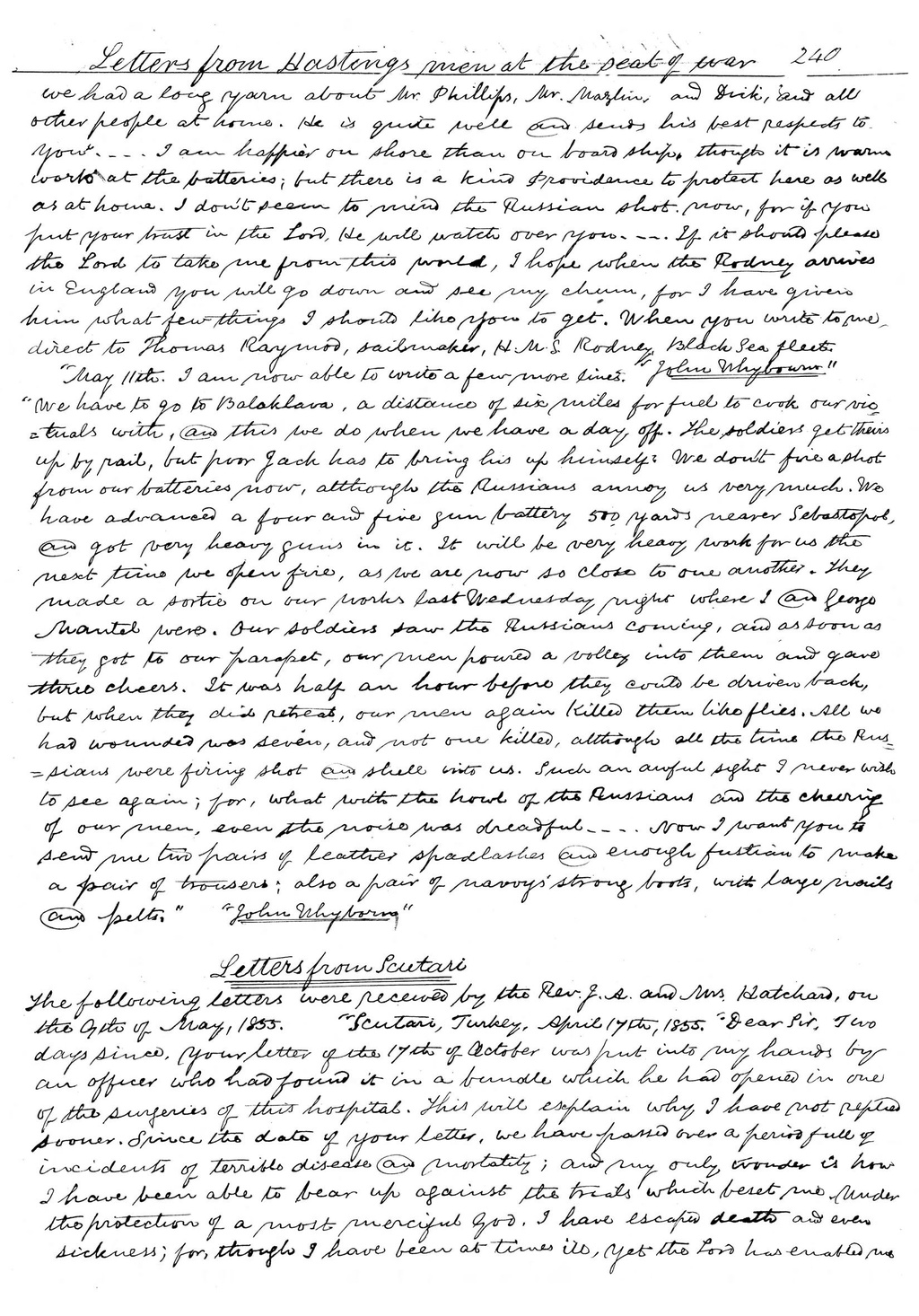