ated by the flashing of the guns, and the roar, which lasted two hours, was most deafening. I have no doubt that the loss was fearful, but I have not heard yet of the amount. Our works are being pushed forward close to the town. A man on sentry can throw a stone down the hill on to the Russian sentries on the Sebastopol road. While I am writing a party of the 46th are just carrying to his last home one of their officers. He and an officer of the engineers were standing together when a round shot came and killed them both. Life is truly uncertain out here. It would surprise you to see the grave yards filled with so many graves in six months... A. B.” [Alfred Bryant]

The next letter is from a sailor of the Rodney, who at the time of writing was serving in the Naval Battery ashore.
“Camp before Sebastopol, May 3rd, 1855. “My dear father and mother, - By the help of the Lord I am now able to write to you once more, it being the first opportunity I have had since landing; but my old chum, the sailmaker, has written to you to let you know where I am. The last [letter] I wrote was from off Sebastopol. The Admiral made signal for the Rodney to go back to the Creek and land 200 men for the trenches, and it fell to my lot to be one of them. The next day we landed at 12 o’clock and found our tents already pitched by our men who had been on shore all the time. The next morning we were aroused out of our tents to go to the trenches. We marched out with the old hands and relieved the other men about daylight. We shortly opened fire on the Russians, and they gave it us fiercely in return. Before 12 o’clock we had three killed belonging to the Leander, and three others wounded. The next time we went we had 24 hours out there; but all last week we did not fire a shot, but advanced our batteries. I am sorry to say the Russians on Friday last killed four and wounded two more in our battery, and among the killed was poor Ben Taylor, of the Queen. He was in the same relief as I was, and as soon as I heard it was poor Ben, I was thoroughly cut up about him. He was a magazine-man and had charge of the powder. He was in the magazine when the Russians fired a mortar shell of 13 inches in diameter, and it pitched right a-top of the magazine and drove it in. When we saw it coming we all expected to be blown up; but Providence saved us, for it broke up without igniting the powder. After the explosion, there was about a hundred men with pickaxes and shovels trying to dig poor Ben out, but when they got him he was dead, his neck being broken. He was buried the same night on the right of the battery. I have seen all the Hastings chaps on shore. George Mantel is on shore, too, and we are always together. When I was at the battery the other day, I went down to the left where we have three mortars worked by the Artillery, and as I was passing them who should I see but Charles Butchers, and- 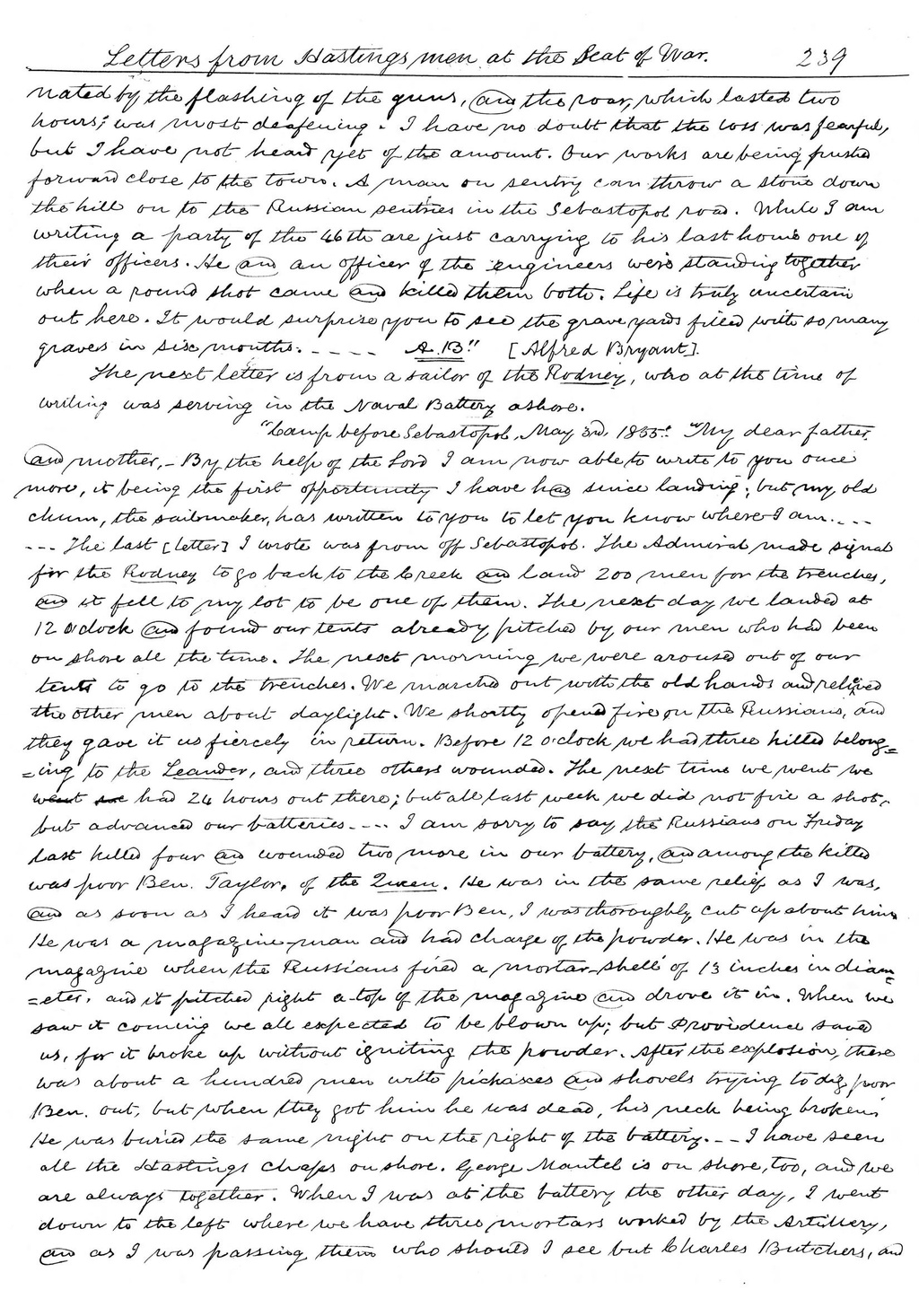