of sporting, when one comes to think of it, but in the trenches on a fine day, when tired of reading, &c., we jump up, saying, ‘I’m going to have a little shooting”, take a rifle, and watch patiently between the sand bags or stones at the top of the breast work for a shot at a Russian. But the birds lie very close; and little else is to be seen than the puff of smoke from a rifle, and then we aim at the spot it proceeds from. All this time the rival batteries are exchanging compliments over our heads.”

Ten days later, the young lieutenant wrote “We now keep a very strong force in the trenches, being actually within a stone’s throw of those of the enemy. On the right attack alone we have always 1200 in the advance, with a reserve of 600, and a working party of 300. The two latter return to camp at daylight, so that at night we have a force of 1200 men. In Chapman’s attack the numbers are somewhat less.... Last night I went to the theatre; that may sound strange for a camp, but the 2nd Louaves have got up one, and capitally they acted. The audience, of course, are in the open air, but there is a regular stage, with curtains, footlights and scenes; also an orchestra. Parallel rows of little trenches are cut in the ground for seats, and enclosed by a stone wall. At the entrance sat a little cantiniere to receive what anyone chose to contribute, nothing being really charged; her basket appeared to be getting well filled with silver, however. At the top of the wall at intervals stood a few Louaves in full dress of green turbans, loose jackets and flowing red trousers, they leaning on their bright rifles. The pieces performed were two very good farces with 4 or 5 characters in each piece, and the conversation was lively and witty. The weather is intensely hot, and bad smells abound in spite of quick lime. There is heavy firing in the trenches to-night. I must conclude, or else I shall lose my half-night in, which is a consideration in these times.
J. Granville Harkness”

Two days anterior date of the above letter, one was also received in Hastings from the camp, addressed by the writer to his friends, and from which the following is an extract:- “We are still in the same spot, with good health, warm weather and plenty of provisions. The firing is not so heavy as it was, but at times there is a rally on both sides. I was in the battery a few days ago, just coming off a working party when a shot came in through the embrasure and struck the man I was talking to and killed him on the spot. It would surprise you to see the unconcern with which such things are taken. Men are laughing and joking, every now and then dropping their heads to avoid the shot as if there was nothing extraordinary going on. On Tuesday night an attack by the French on the Flagstaff battery; they succeeded in entering it and spiked several guns and mortars. The firing was tremendous. It was the most awful night I ever witnessed. The sky was illumin- 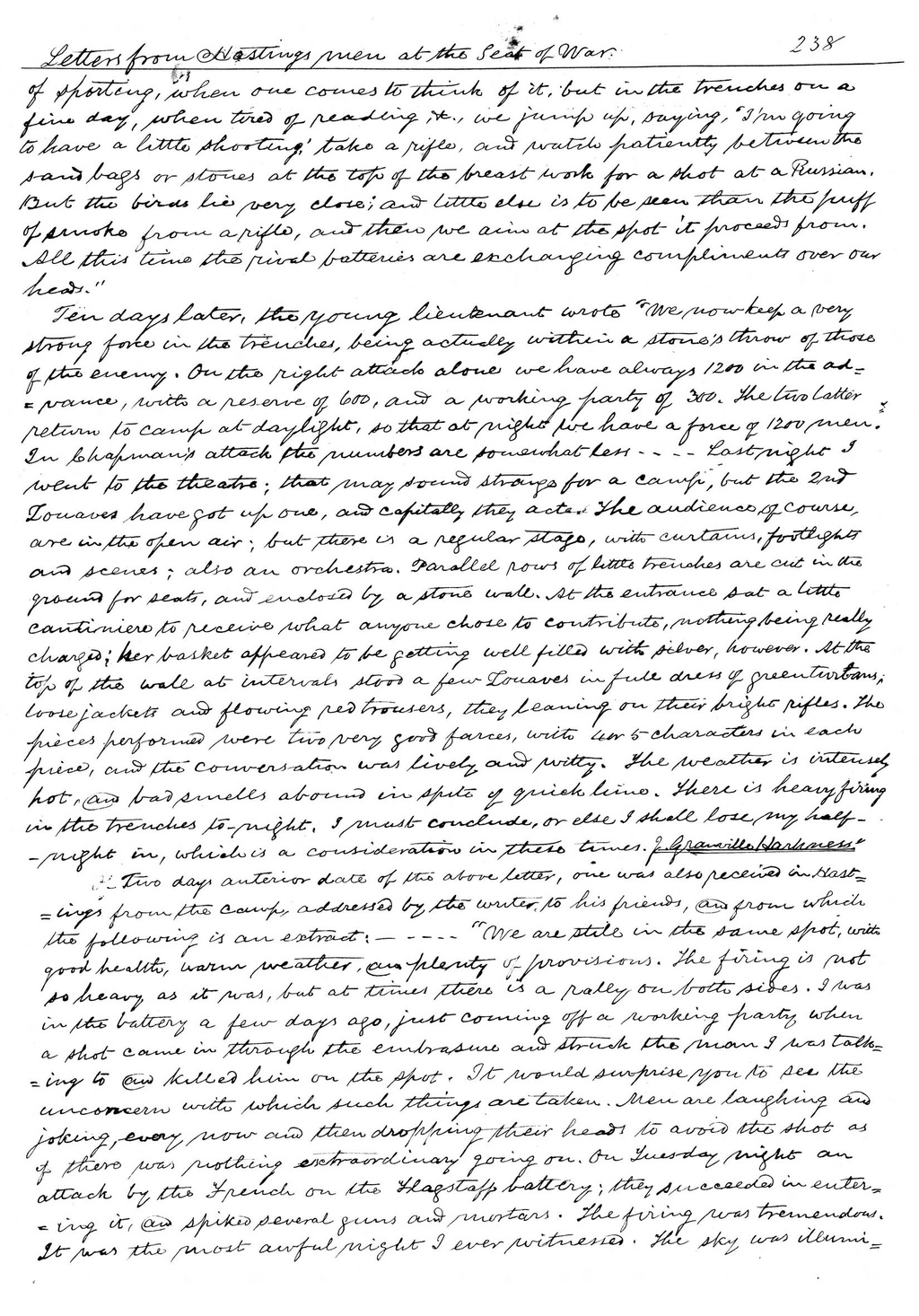