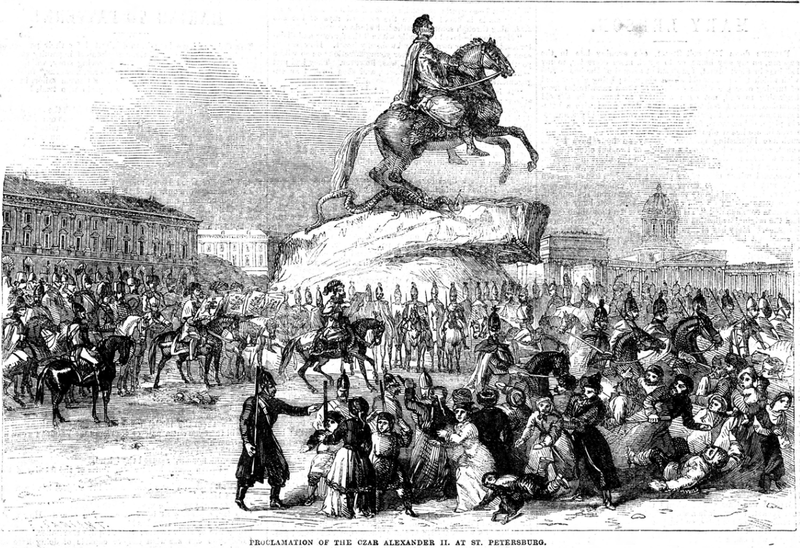 RUSSIA AND HER NEW CZAR.

THE accession of a new sovereign to the Imperial throne of Russia, at a period like the present, cannot but be considered an event of great importance, Both as affecting the more immediate interests of the scattered millions of inhabitants in the vast territories over which the Czar holds absolute sway, and the great amount of general welfare which hinges on the policy of the northern potentate, the proclamation of a new emperor is a matter highly suggestive of reflection. It is true even the power of the Autocrat of the North, may not be of that unlimited character which could, without counsel or consultation, suddenly substitute peace for war—that even the imperial ukase may not be able to effect with a few brief sentences, an entire change either foreign or domestic, without a fear of the consequences—but that the character and tendencies of the ruler of the state must exercise a great influence over the bearing and general policy which it assumes cannot be doubted.

Even in our own country, where prerogative has been limited for so many centuries, the prosperity and happiness of the people has been observed to be materially affected by the character and habits, the capacity or incapacity, of the reigning monarch, and in an empire which like Russia bows itself to absolutism, the good or evil destinies of a large portion of the world, may be said in no slight degree to depend on the power which wields the imperial sceptre.

With the grandeur and pomp befitting the public ceremonies of a great empire, the succession of Alexander II. to the throne of Nicholas I. was lately made known to the people of St. Petersburg. The scene was imposing—in the great square, where the architectural features of the city present their most splendid coup d’oeil, the dignitaries assembled to whose special office it belonged to proclaim the new sovereign. Accompanied by the trumpet-blasts of the heralds, and in the presence of the imperial guard, it was announced in one breath that the Czar Nicholas was the Czar of the past, and that the Czar Alexander had begun to reign—that the former had “ shuffled off this mortal coil,” at a most critical period in the drama of his life, but that a successor was found willing to finish out the hazardous part which had been so suddenly cut short.

But aj from the outward character of the spectacle, there are far higher considerations which cannot but suggest themselves to us. We are now at war with Russia—and as that hostility was provoked by aggressive ambition, so it may be soothed and reconciled by the return to less daring and more just counsels than those which found favour with the late Czar.

If Russia, immense as its territory, were not large enough to satisfy Nicholas, it might yet be hoped that Alexander perhaps would see no reason in adhering to that iniquitous system of absorption and aggrandizement which had characterised the policy of his predecessors—that, as a guarantee of peace he might even be willing to consent to yield up some of that ill gotten spoil of which Russia had deprived nations and tribes in her neighbourhood, and which as an earnest of future good faith, it seems reasonable in the allies to require. Might it not hoped that the inauguration of a new Czar would prove. the inauguration of a new and better order of things? that the old principle of the “glory” of a reign, which seemed to depend on the amount of shooting and stabbing, and robbing, which was got through during its course, might give place to that brighter and more enduring “ glory ” which seeks to elevate and improve—to enlighten and enrich—instead of desolating and oppressing humanity. It would be gradual, perhaps—but might not some promise of the dawn of truth, of mercy, even of freedom, become apparent —

”Shall War's polluted banner ne'er be furl’d,
Shall crimes and tyrants cease but with the world!”

Even among the spectators of that scene in St. Petersburg — though doubtless there were many who would have blindly shouted for war — some, it may be trusted, had thoughts of higher principles. Despite the exclusion of intelligence and literature from the West, which the late Czar laboured so hard to effect, there were those among the crowd in the capital, who looked on the quarrel in which their country was involved as the result of their late Emperor’s unjust tyranny, and his lust of territory— who saw nothing in its further pursuit but disaster, not only to themselves, but to the general interests of Europe.

In the great square of St. Petersburg—under the very shadow of that statue of the Great Peter, he who murdered his own son Alexis, and who left his dreams of conquest as a legacy to torment the world—we will hope such sentiments as these, if they were fugitive, were not altogether wanting. The new Emperor is said to be a man of pacific disposition, and enlightened views, possessing neither the hauteur nor the inflexibility of his father, In his manifesto, however, he invokes the aid of Providence in assisting him to maintain the power and glory of Russia, and to enable him to accomplish the incessant wishes of Peter, of Catherine, and of Nicholas. One statement is diametrically opposed to the other; but it may be that the influence of the war-party is at present too strong in the young Czar’s counsels for him to speak of peace without some apprehension of the consequences. Certainly, the prosperity of the reign of Alexander II, in a great degree depends on the sympathy he may exhibit for liberal and conciliatory views.

It is true that the efforts of the Alexander of 1812—who has been described as a beneficent angel sent before his time—were fruitlessly directed to enfranchising the Russian serf, and to the civilizing and improving his moral position; but then he endeavoured to bring that about by an arbitrary and sudden enactment, which should have been the gradual work of a series of political changes, As with other nations, the soil of Russia requires preparation ere the seeds of progress and enlightenment can be received with any chances of fructification — improvement cannot take place till the portals of knowledge are opened from the West, the heavy tarif(sic) on foreign books removed, and the debasing power of the noble over the life and actions of the serf is abrogated.

It only needs the spread of enlightenment to show the people of the Russian Empire—and indeed every other nation—that England wars not against populations, nor even against rulers, whether they be Autocrats, Kings, or Presidents—but to uphold the weak against the overpowering might of tyranny, to preserve the just limits of states, and to guard against the encroachments of insatiable ambition, she is willing to lend the strength of her arm. Nor will she abandon so glorious a mission while her capabilities and her destinies enable her to prosecute such a combat.

More letters from the seat of war.

Another letter from Lieut. Harkness to his mother and dated “Camp before Sebastopol, April 27th, ran as follows:-

“Our opinion of the Russians is that they are excellent soldiers – hardy and enduring; and above all, most ably commanded. Their defence has been wonderful, and with no possible means neglected to annoy us. Their artillery is first-rate; in number and weight of metal in the field they beat us hollow, and their practice I think is equal to ours, except when under a heavy fire, and then both our gunners and seamen make the best practice. We feel admiration for their qualities as soldiers rather than any particular animosity against them. It seems rather an odd style- 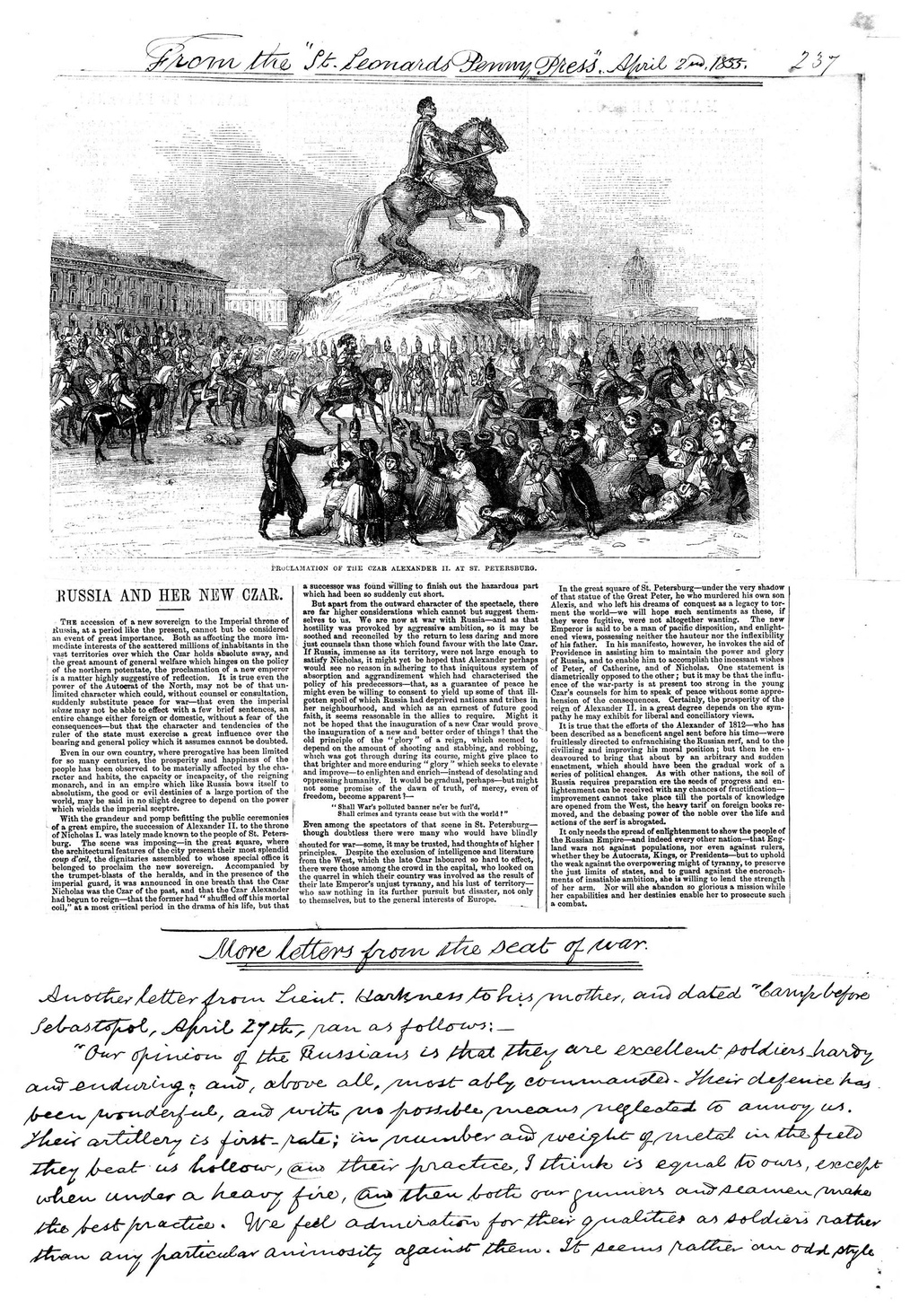