Death of the Emperor of Russia.

The Russian Czar died on the 2nd of March, and the news was received with a feeling more of satisfaction than surprise or regret. Locally and generally, the event was regarded as one of such supreme importance as to throw every other topic completely into the shade. The leader writers of all newspapers – both metropolitan and provincial – appeared to subordinate all other themes to that event of European importance. Said the Daily News “Nicholas Pavlovic is dead; but the Emperor of Russia still lives. Boundless as was the ambition of the late emperor, and relentless as was his will, he was less formidable as an individual than as a part of the Muscovite system of Government. . Though he has gone to his account, the spirits of Peter the Great and Catherine ll continue to animate the Cabinet of St. Petersburg. The Muscovite party survives with undiminished strength, and the death of the Sovereign cannot but give a momentary check to the operations of the Russian Government.”

“The Czar is Dead” (From the Hastings News)

“The mighty lord of all the Russias – dead,
But yesterday his dreaded name was heard
In every tone of human passion said,
By Europe’s startled hearths, a household word.

“The orphan girl when questioned why she wept
Sobbed it for answer ‘mid her flowing tears
And the pale widow, while her baby slept,
Prayed strength to pardon him through life’s lone years.

“They spoke it in the Council of the land,
In condemnation stern and warning sage;
His every act and word were closely scanned,
Thought of each heart, and theme of every page.

“By village altars, in Cathedral domes,
Priests linked him with the pray’r ‘gainst stubborn will,
And as the blight crept over smitten houses,
His length’ning shadow cast that fearful chill.

“His power sent the countless myriads forth
On the wide steppe and frozen drifts to fall;
He armed the swarming children of the North,
To die in thousands by the leagured(sic) wall.

“His influence could fire fanatic zeal,
To march fresh victims o’er the bloody sod;
And mid the cannon roll and clashing steel,
They shouted forth his mighty name for God.

“All this but yesterday! and now – and now,
Oh! solemn warning! Heaven’s own sermon this –
The daring wrong – vast scheme – vast scheme and despot vow –
How less than nothing human empire is.

“In reverent awe let us the lesson take
Hush the loud marvel, bow the meekened head;
Above his dust let no coarse censure wake
But earth be humbled, for her troubler’s dead!”
“Katie”
“Hastings, March 3rd, 1855” 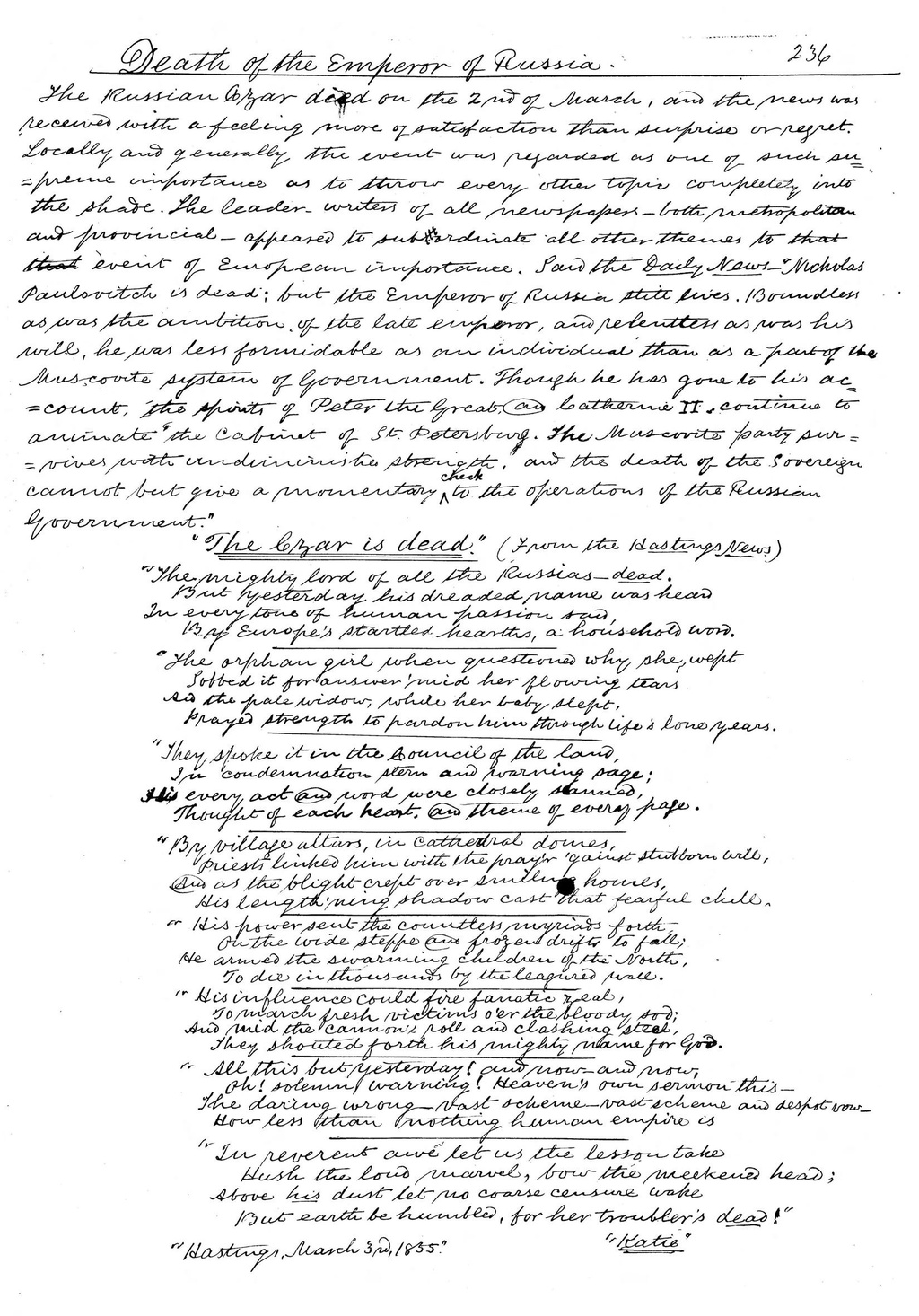