very nearly ready for the assault, and I think we shall commence on the 5th, if peace is not proclaimed, which we hear some talk about. The Russians are getting pretty tired of the work. We are constantly firing at them, but sometimes they return us two for one. We take a good many Russian prisoners, - sometimes a hundred in a night....It is a very grand sight to see the whole of the encampment; it is called Canvas Town. Balaklava harbour is a very small one, and is crowed(sic) with vessels. I expect before you receive this it will be one way or another with us. I have no more to say at present, but remain your affectionate friend
George Vickers.”

John Whyborn again writes to his parents from the ship Rodney, dating his letter April 10th, 1855. He says – “I am now enabled to write to you a few more lines before again going into action. We are now under weigh, about three miles from Sebastopol harbour. We sent up our top-gallant masks and bent sails, and got all ‘attanto’ last week, and we were towed out of the Creek on Easter Sunday, and we now expect every hour to attack the forts. Ours is the only sailing ship here, and the Furious steamer is towing us. We, the Agamemnon and the Royal Albert are to attack Fort Constantine and the Flag Battery. There are three Russian line of battleships moored across the harbour mouth. I am in hopes Sebastopol will fall this time; and if it should please the Lord to take me away you must say ‘The Lord’s Will be done’; for our lives are not in our own hands. I received a note last week from Curtis Reeves, in the trenches, who is quite well. I also received a letter from Eli ---. I am happy to tell you that I received my box, and everything was good in it. You must thank for me all of them who sent the various things.
John Whyborn”

Death of a Hastings Man

A letter received on the 10th of May, by Mrs. George White, of the Dolphin Inn, mentioned a credible report that Benjamin Taylor, an able bodied seaman, of H.M.S. Queen had been killed by a shell while serv(sic) on shore in the Naval Brigade. The deceased was about 40 years of age. The letter was written by one of his comrades, named John Geering, also belonging to Hastings.

The said Benjamin Taylor, son of Jeffrey Taylor, a Cooper, and Jane, his wife, was baptized at Hastings on the 28th of April, 1816; his stated age “about 40” would therefore be correct. 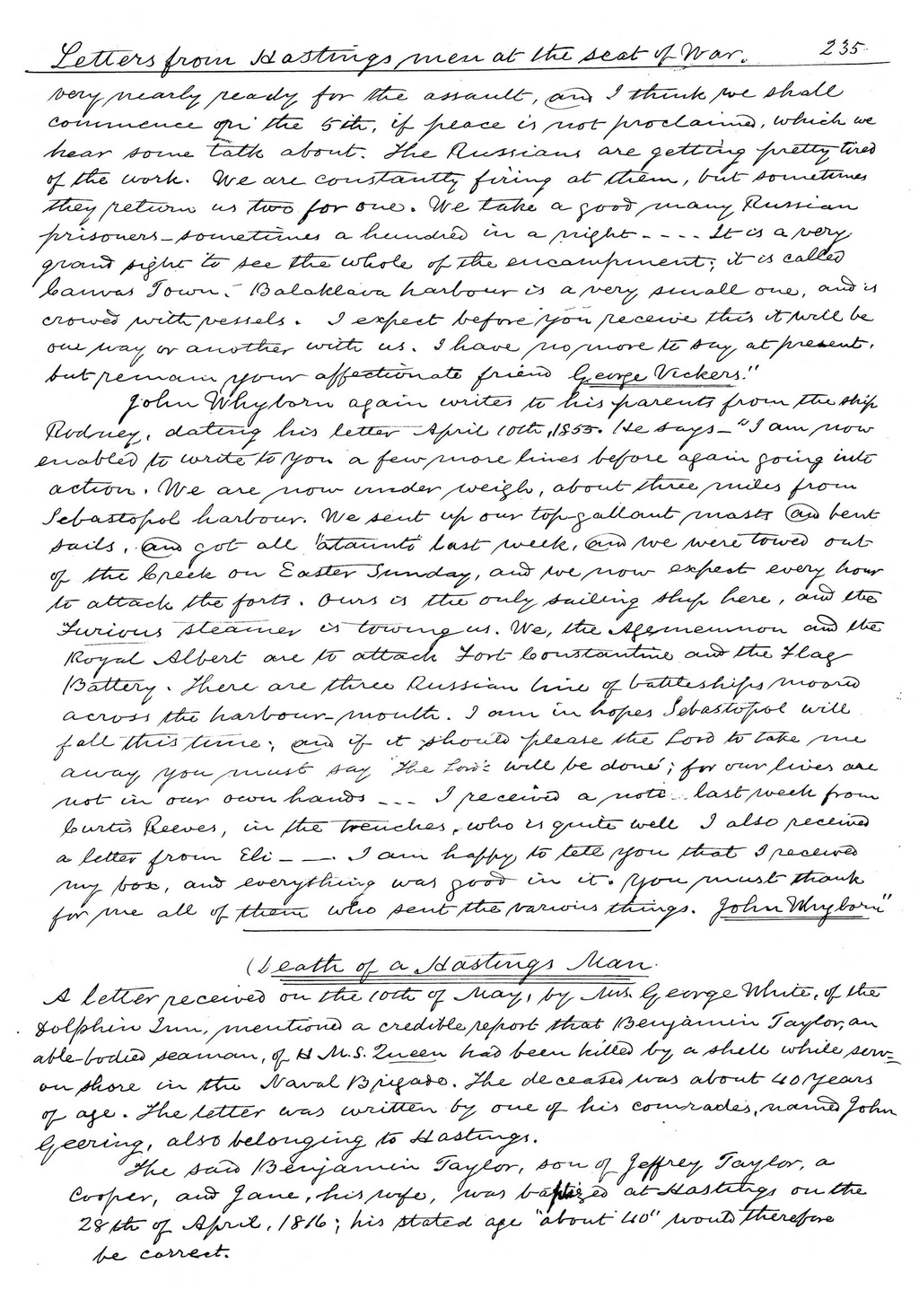