diately manned our parapet and blazed away at them. This continued on both sides for six or eight minutes, when we found that they were firing, like us, from their breast-works; so we ceased, and so did they. The night after passed quietly as far as we were concerned. The mortars continue to throw shell all night, but with daylight commences the general cannonade. The seige(sic) is so active now that something must take place before many days. This tremdous(sic) fire cannot last long. The fleet have not yet taken any part in it; but, doubtless, they will when the assault is made. We have not much faith in the Vienna negotiations.... J. Granville Harkness”

The following cutting from the St. Leonards Penny Press, of April 2nd, confirms the Lieutenant’s remarks as regards the conferences and some other matters:-

The report of the death of the Ottoman commander, Skander Beg, as also that of Prince Menschikoff. and the Grand Duke Michael turns out to be false.—The Vienna conferences are not viewed favorably by the Porte—The French have 3 batteries armed with English guns pointing in the direction of the Malakoff tower.—The Russians having laid ambuscades within 200 yards of the French lines were driven out of them, with considerable loss to the former.—The whole of the Imperial Guard are under marching orders for the East.—The King of Prussia invites Lord John Russell to spend the Easter holidays at Berlin.—A fanatical appeal has been made to the Russian people to rise in arms, and to “fight for the cause of Christ against the Prince of Darkness. —Several detatchments(sic) of Russian troops have already taken up positions as advanced guards on the shores of the Finnish Gulf.—The British advanced steam squadron is pursuing its way to the Baltic, and the fleet at Spithead has crossed royal yards preparatory to a move.—The Vienna conference having taken the 4th point into consideration, the 3rd, is left aside for the present.—The Allies are said not to demand the dismantling of Sebastopol, but insist on something almost as distasteful to Russia.—A small battery constructed by the French, and armed and manned by the English has been the means of destroying a Russian war-steamer.—Cavalry and other Russian reinforcements are reported as pouring into the Crimea in great numbers.—The health and spirits of the allies are greatly improved, and steeple chases and other sports are of daily occurrence.

The Piedmontese troops to the Crimea are to be raised to 17,000.—Spain and Portugal are said to have joined the Allies. —The Grand dukes, Nicholas and Michael have returned to St. Petersburg from the Crimea.—Sir E. Lyons in the Viper, has destroyed a fort, barracks and granaries in the Black Sea.—The British vessels, Highflyer, Leopard, Swallow, Viper and the French steamer Foulton have attacked Soujak Kale with partial success

The next letter from the seat of war is from George Vickers, of the 5th Battalion, Royal Artillery, to his friend William Wenham, Winding street, Hastings. “Camp before Sebastopol, April 2nd, 1855.
Dear Friend, - I take up my pen to let you know I am well, and hope when this reaches you it will find you and family all in good health. I left Woolwich on the 2nd of February, and arrived here on the 1st of March. We had a very good passage all the way and enjoyed good health during the voyage. We are encamped within a few yards of Sebastopol – so close that when we go to work in the trenches the shot and shell come flying over our heads; but we care very little for them, as we are getting so used to them now. We had an attack on the 21st of last month. The Russians attacked the French batteries, drove them back, and then came on to our advanced works. They drove us away from our guns, but two of our line regiments came down and drove them out at the point of the bayonet. We had three officers and about thirty men killed and wounded, while the Russians had eight or nine hundred killed and wounded. We have a very fine army here now – about 120,000 English and French, all being in good spirits and wanting to get into Sebastopol. The weather is very mild here at present, but it changes very often, and causes a great deal of sickness among the fresh arrived troops. We are- 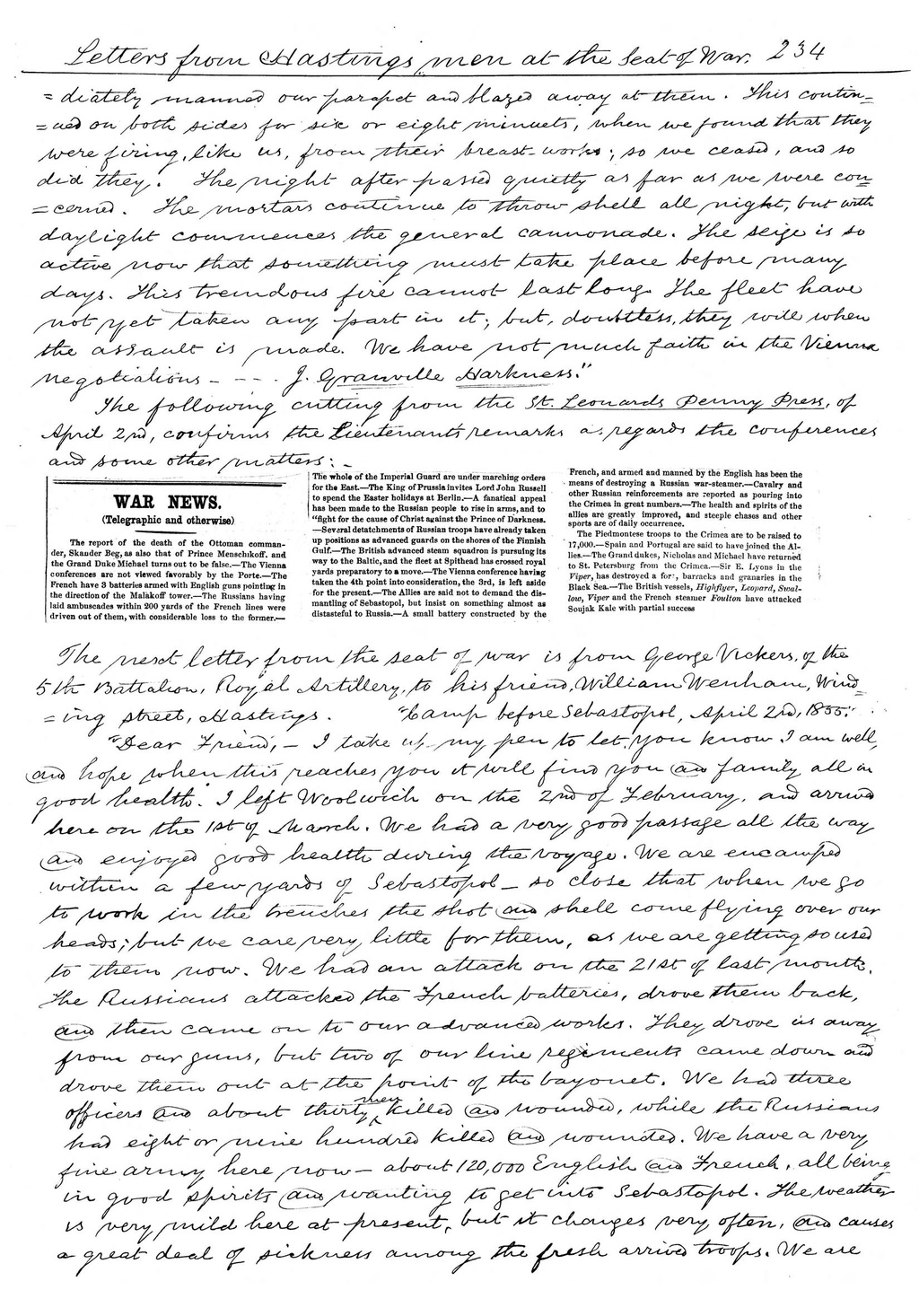