being a point very offensive to the enemy, the head of the sap being actually not more than forty yards from their rifle-pits. On Saturday there was a flag of truce from 12 till two, to allow both sides to bury their dead. Then an extraordinary sight was seen. The whole space between the lines was immediately covered with parties taking up their own dead; the Russians mingling with us and the French in a friendly manner, talking and exchanging drink, cigars and tobacco – officers as well as men. Amongst the Russians were many Albanians and Circassians, splendidly dressed. The body of an Albanian chief, dressed in flowing white kilt, blue and silver jacket, and a sash stuck full of pistols and knives, was found inside our trenches. He was the man who killed Capt. Browne, of the 7th Fusiliers, and was shot himself immediately. The Russians lost severely. It was estimated that 400 or 500 of their dead lay upon the ground. The French loss I do not know, but it was considerably more than that of the English, which was only about thirty. Immediately the time was up, the white flags were hauled down, and the rifle balls began singing about as before. There is a good restaurant established near Balaclava, where one can dine and lunch well for about a dollar. I went to see E. J ---- the other day, and he gave me a dozen eggs – a great prize, as we had not seen any for seven months. His mother brought him a box full from Sinope.....J. G. Harkness”

April 14th. The bombardment opened on Monday. This is now the end of the fifth day of incessant cannonading. I have just returned from 24 hours in the advanced trenches, having endured such a din as you cannot conceive from the roaring and crashing of shot from some hundreds of great guns, the humming of fragments of shell in all directions, and the singing of rifle balls, all going a few inches over one’s head. We take it all very unconcernedly, the officers picking out a good corner for comfort, dryness, sunshine or safety, as the case may be; sitting, reading a newspaper or book, or smoking or sleeping during the day, and the men doing much the same; some exchanging shots with the enemy’s riflemen whenever one shows so much as the hair of his head. Our trenches now are very close to theirs, and in many places scarcely more than the length of our terrace at home. I suppose you understand that the trenches intersect the ground for several hundred yards in front of our batteries, and are for the purpose of sheltering the guard of 1200 men placed there to repulse any attempt of the enemy to rush upon the batteries and spike the guns; also for the purpose of establishing fresh batteries nearer the enemy. Last night I though we were in for a regular mill. Soon after dark we saw the figures against the sky, of the Russian relief going into their rifle-pits. We gave them a volley from about twenty rifles. They threw themselves flat on the ground, but immediately returned our fire in such force that we thought at first they were advancing upon us. We imme- 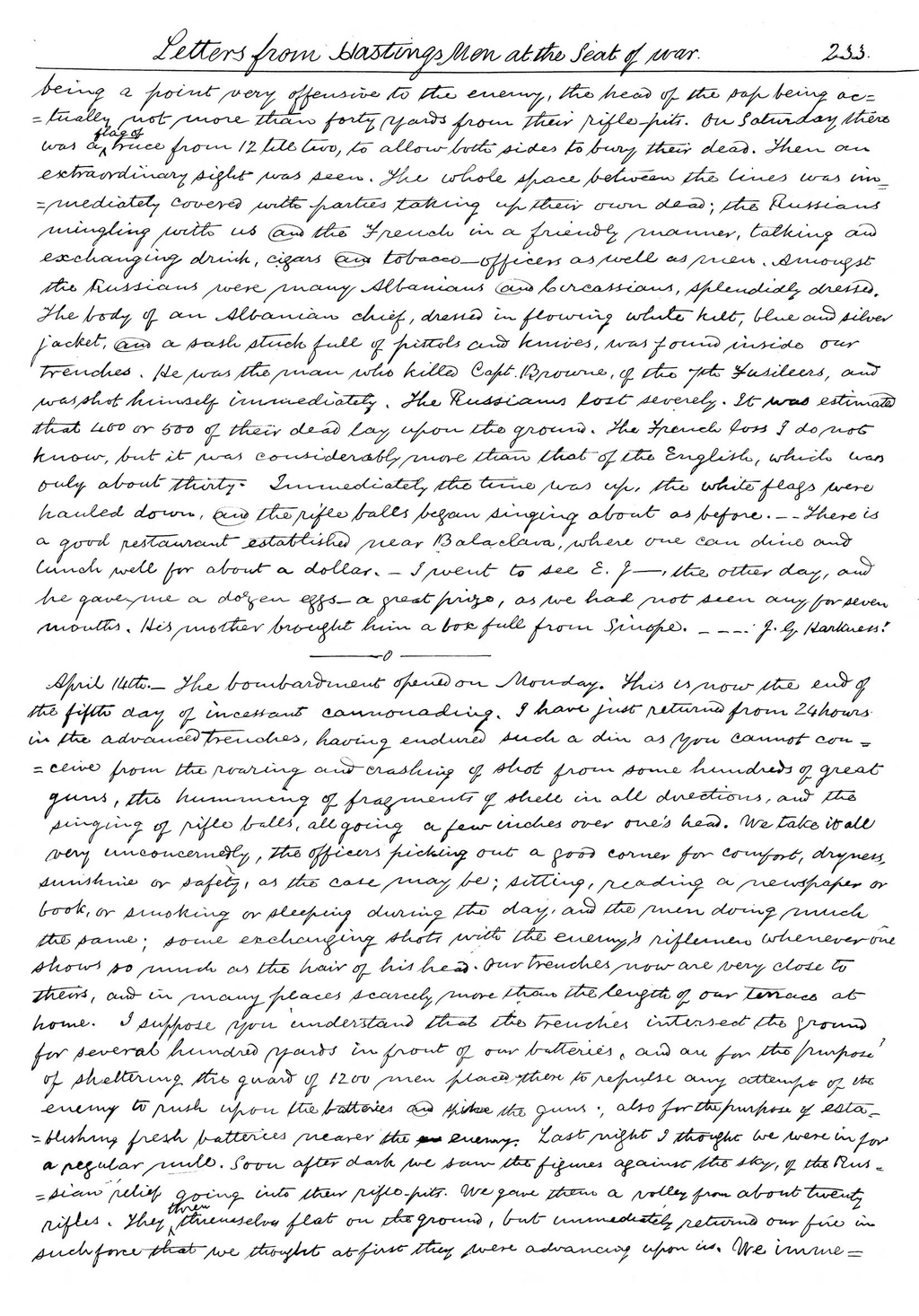