tackling of a gun and were lifted up above his head, whereby one leg was struck by a 42lb ball, and amputation became necessary. Thus disabled, he lay on the ground till next morning, when he was taken down to Balaclava, whence he was sent to the naval hospital near Constantinople, and afterward shipped for England, arriving at Hastings after a very stormy passage. He was drafted from H.M.S. Queen to serve in the trenches on land. 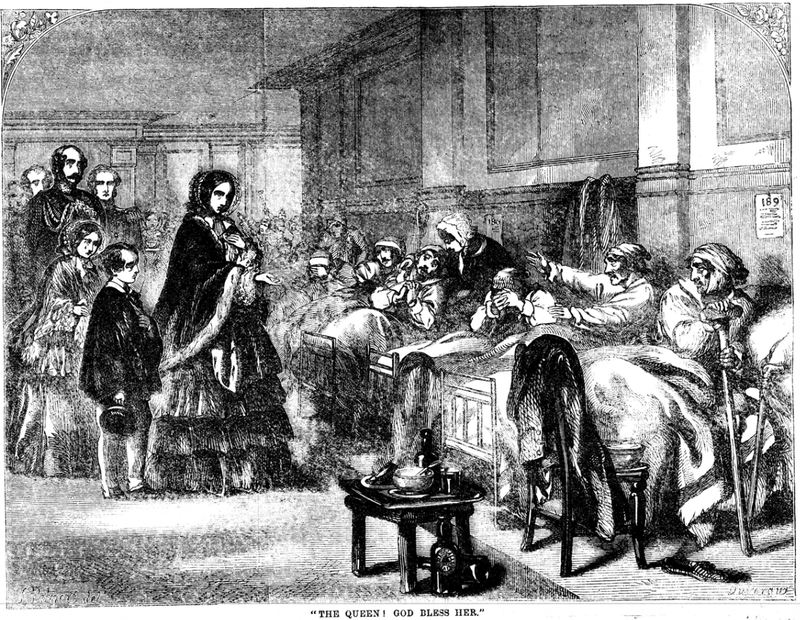 ENGLAND AND HER QUEEN.

"O majesty!
When thou dost pinch thy bearer,
thou dost sit Like a rich armour worn in heat of day,
That scalds with safety" - SHAKESPEARE.

Amidst the countless conflictions of sect and party, the endless rivalries of trade, the discontent with acts and measures of government which commonly manifest themselves amongst us, there is one theme on which we can afford to be almost perfectly unanimous — one feeling which may be found generally prevalent among all classes in Great Britain; and this is the attachment exhibited to the throne—the loyalty of the people. Notwithstanding that political agitators now and then arise, who would seek to convey the presence of opinions opposed to those we have instanced, the fact is too patent and palpable to admit of question that the population of these islands evince a widespread and pervading sentiment of devotion and goodwill to the ruler placed over them—to their Queen!

It has formed matter for just congratulation to the people of this country, that while kingdoms and states in almost every part of Europe have been convulsed by revolutions and counter-revolutions — while anarchy, disorder, and even civil war has fell upon other nations, England has preserved the same high and tranquil bearing. If nothing else were left for our nation to be proud of she might still boast, that while émeutes and insurrections broke out, while provisional governments formed and exploded themselves — while hundreds of exiles, refugees, and political incendiaries swarmed upon her shores — the solid fabric of her constitution was insensible to change or disturbance, and the throne of her sovereign was the only one in Europe which stood fearless in revolutionary convulsion, and which was unaffected by its results.

It is not because greater force is maintained in our country to crush down the thoughts and opinions of the people, that this security and consequent happiness is enhanced — it is not that harsher or more stringent laws are upheld among us—it is not that an unlimited prerogative is vested in the chief of the state: enlightenment and our sense of justice has taught us that such are not the means which can contribute to the solidity or strength of governments. It is in the fundamental principles of liberty which pervade the laws, which provide for and allow the expression of opinion, and admit the general right of the people to reform grievances and abuses, which form our safeguard against levellers; while the love which the nation bears towards its monarch—rather perhaps than any admiration for monarchy as a system—makes the country loyal, and firm in its attachment to the throne. And well enough may this feeling ‘be evidenced towards our present sovereign, who beyond any former monarch has shown herself deserving, and capable of appreciating the attachment of her people.

Wherever we hear of the Queen, it seems to be her aim to dispense with the outward symbols of royalty—no pageantry or ostentation accompanies her movements—even on state occasions she endeavours to dispense with gorgeousness and pomp, and ordinarily she has not so much exterior embellishment, splendour, or pride as would serve to distinguish her from any of her subjects—at least, in the respectable walks of life.

The recent autograph letter of Her Majesty, in which she warmly expressed her anxiety respecting her “brave soldiers,” adding that their ”Queen cared for the meanest of them,”— her reception of the wounded guards at Buckingham Palace— her visit to the military hospital at Chatham, which we have illustrated above—and a thousand other instances of sympathy and care for the welfare and comfort of her people, exhibit our Queen in that exemplary light which has served to endear her in the hearts of the nation, which has distinguished her throughout her reign, and which it seems her most ambitious aim to persevere in and maintain.

”Princes that would their people should do well,
Must at themselves begin, as at the head;
For men, by their example, pattern out
Their imitations and regard of laws:
A virtuous court a world to virtue draws.”

And truly when we look abroad—when we reflect for a moment on the representatives of hereditary greatness who now reign in Europe, England may count it as one of her glories that Queen Victoria is her monarch. Known only to her people from acts of charity and benevolence, or words of sympathy and commiseration—unsullied in her private reputation, and illustrious only from her virtues and good qualities, her royalty wins rather than commands homage, and seems to lighten rather than add to the burthens of the nation.

Where sovereigns and rulers exact obedience by ukases and decrees—where knowledge is crushed out, as dangerous, from among the people by arbitrary enactments—and where the armed forces of tyranny would silence the outcries of the oppressed, — there, indeed,

”Uneasy lies the head that wears a crown.”

But where liberty is respected, knowledge and genius fostered, misery assuaged, and sympathy accorded, the fair jewel of a nation’s will lightens the lustre of the regal coronet. It does not apprehend ill — it fears not plots or conspiracies, and the royal brow is not pained or aching with the bright diadem which it wears.

Two more letters from Lieut. Harkness to his mother serve for the following extracts:-

“I wrote to ----, three days ago, and told him something about the sortie the other night. The struggle at the French sap, on the right of Gordon’s battery was the most severe, this- 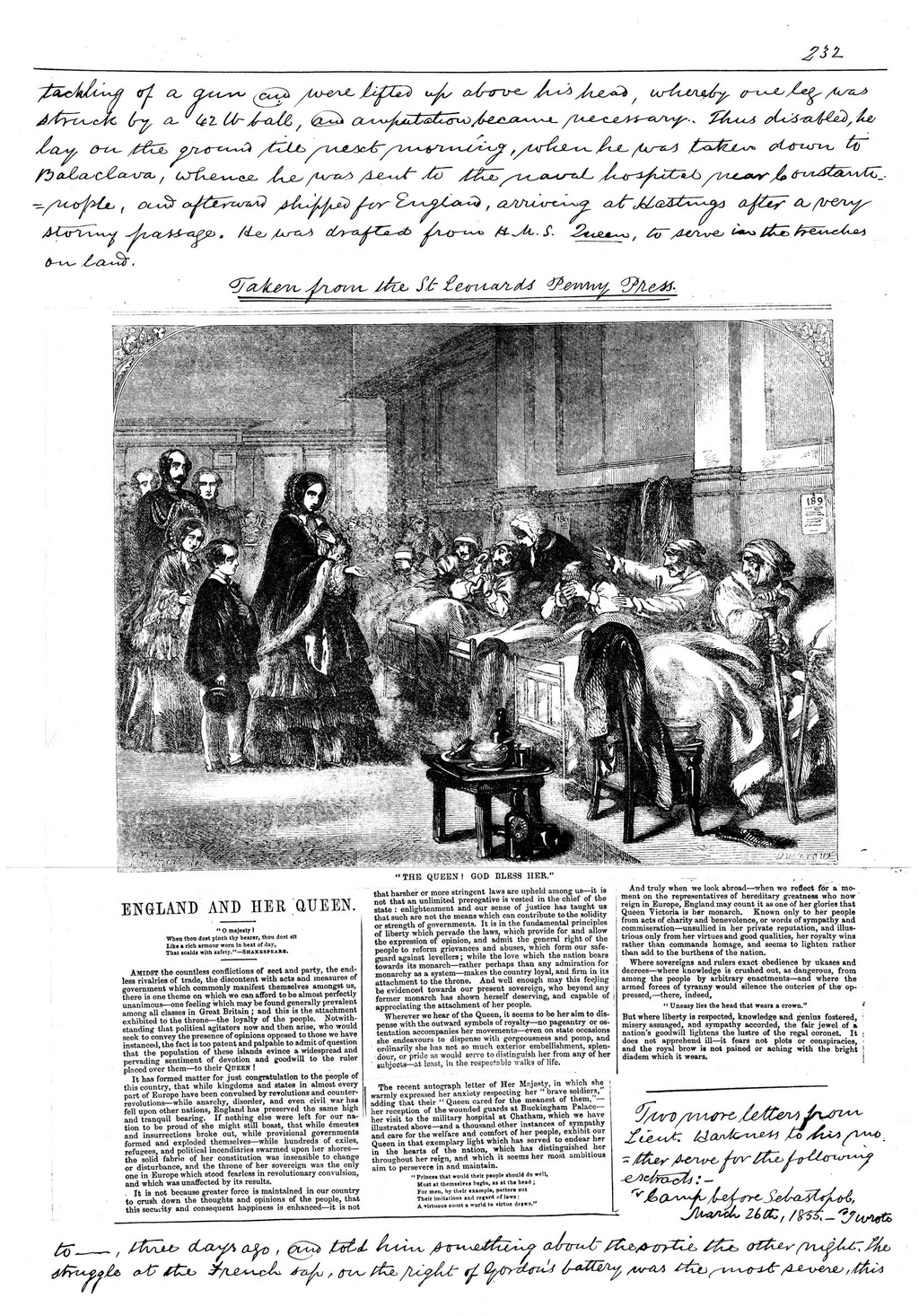